Bibliophiles rejoice! It’s that time of year when KU students have the opportunity to translate their passion for collecting books into cold hard cash by entering the Snyder Book Collecting Contest. 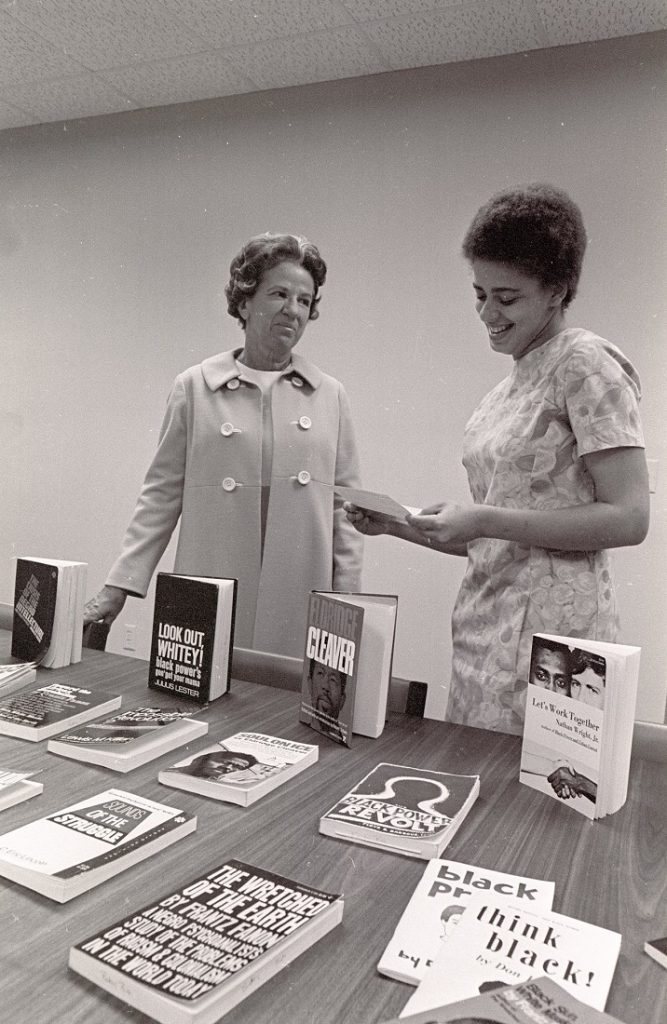 This week’s photo looks back to the 1969 competition and features Betty Ann Bush (right) with her winning collection, “Writings from the Black Revolution.” Also pictured is Elizabeth M. Snyder, who founded in the contest in 1957 to recognize and cultivate student interest in books and book collecting. At the time of the 1969 contest, first place garnered $100.

Earn your place in KU history by entering your collection in this year’s competition! Winners of the 2018 (62nd Annual) Snyder Book Collecting Contest will be selected in both graduate and undergraduate divisions, with the following awards:

The first place winners in each division are eligible for the National Collegiate Book Collecting Contest, which awards a top prize of $2,500.

Start scanning your shelves since entries to the Snyder Book Collecting Contest are due by 11:59pm on Sunday, February 25, 2018.

To learn more about the contest and how to enter, please visit the contest page on the KU Libraries website. There you will find the contest rules, a handy FAQ, as well as selected essays, bibliographies, and a sample collection to help you on your way.

Spencer’s North Gallery has been the library’s iconic space since the building opened in 1968. Earlier this summer we finished a renovation of the space and installed a new permanent exhibit featuring a snapshot of Spencer’s collections.

Come see the changes in the North Gallery any time Spencer Research Library is open, or attend the grand reopening next Thursday, September 7th, 3:00-4:30pm. The opening reception is free and open to everyone, and we hope to see you there! The new school year is just around the corner, but there’s still time for travel and vacation. When you go, be sure to take along some KU gear – just like the faculty members and their families in this week’s photograph did in 1921. Here is some additional information about each faculty member.

Frederick H. Billings (circa 1869-1964): Billings taught in the department of bacteriology (1907 to 1917) and served as its first chairman. He was then at the University of Redlands in southern California, where he was a professor of biology and bacteriology for nineteen years, until his retirement in 1940.

William Alexander Griffith (1866-1940): Griffith came to KU in 1899 to establish the department of drawing and painting. During his tenure at the university, Griffith lobbied Sallie Casey Thayer to donate her art collection to KU; it forms the basis of what is today the Spencer Museum of Art. Griffith resigned his position at KU in 1920, relocating to Laguna Beach, California, to focus full time on landscape painting.

Carrie Watson (1858-1943): Watson survived Quantrill’s Raid on Lawrence as a young child and went on to study at KU, earning degrees in 1878 and 1880. She was hired as an Assistant Librarian in 1878 and promoted to Head Librarian in 1887, a position she held until her retirement in 1921. Known as a disciplinarian, the Kansas City Star once reported that Watson “quieted [unruly students] with a chiding eye” and always insisted that “the library was a place for study rather than flirting.”