April 16th is “National Librarian Day.” In honor of all library faculty and staff on KU’s campuses, here is a look back at Carrie Watson, a librarian at the University of Kansas from 1878 to 1921.

Caroline “Carrie” Morehouse Watson was born in Amenia, New York, on March 31, 1957. The following year, her family moved to Lawrence, Kansas Territory. They did so, like the abolitionist settlers who came before them, to ensure that Kansas would enter the Union as a free state. When she was five, Confederate guerilla chief William Quantrill and his band of men raided Lawrence, killing approximately 200 men and boys. Carrie attended survivor reunions and can be seen in group photographs.

Carrie graduated from the University of Kansas in 1877. Several months later, Chancellor James A. Marvin (whose tenure lasted from 1874 to 1883) appointed her Assistant to the Librarian of the University. At that time, the position of “Librarian” was held by a faculty member chosen annually by the chancellor. The holdings of the library consisted of about 2,500 books – mostly government documents – housed in a room in old Fraser Hall (located roughly where modern Fraser Hall currently stands).

Carrie earned the title of Librarian in 1887, under Chancellor Joshua Lippincott (1883-1889). She had taken courses in librarianship as she could, mostly over summer breaks, and traveled to the Boston Athenaeum, Harvard Library, and Boston Public Library to gain additional training. KU’s new library building was ready in 1894, and the holdings were moved from Fraser Hall to Spooner Library (now Spooner Hall).

Throughout her career at KU, Carrie oversaw the expansion of holdings such that when she retired in 1921 the library had about 140,000 volumes, 1,185 periodicals, and 121 newspapers. After her retirement, Carrie continued to serve in the KU Library, mostly as an unpaid volunteer.

Thirty years after moving into Spooner, the library, again, had outgrown its space. A new building was approved by the Kansas Legislature. It was completed in 1924 and named Watson Library, forever honoring KU’s first true librarian.

In a December 1943 article for The Graduate Magazine, author Margaret Lynn wrote:

What Miss Watson had inherited of pioneer spirit went into the library. She did not merely take what was put into her hands and make a temporary best of it. She saw the needs of a University library and fought for them, sometimes with authorities who did not see what an investment a library should be. She faced regents and chancellors and professors. She carried on with a staff too small, and quite untrained except in what she taught it. She managed with inadequate or crude equipment. When in 1894 the library was moved from the rooms in Fraser Hall to the new building, the gift of W.B. Spooner, it was a great day. At last there was enough space! But not one assistant had been added to the small staff. Miss Watson had a share in the development of her state also. She was a pioneer in state library work. She was ready to carry what she had learned to those who were still at the beginning. She assisted in state organizations. She was on state committees. She spoke at conferences. She helped librarians-to-be with fundamental instruction. She lectured [to] high school libraries, to education classes in the University. She lectured on bibliography to history classes. She had not only a task but a mission….The three institutions which in childhood she saw beginning – the State, the University, the Library – she lived to see established and developed. She could not have guessed how important a part she was to have in them.

Did you know that KU did not have an official residence for the Chancellor until 1893, when the university was almost thirty years old? This first residence wasn’t The Outlook, the home of Jabez and Elizabeth Watkins that became the Chancellor’s Residence in 1939. It was another home at 1345 Louisiana that was demolished in 1953 to make way for present-day Douthart Hall.

The article “An Old Friend” on the KU history website tells the story of how the first Chancellor’s Residence came to be built.

In 1891, the University had received a generous $91,618 bequest from the estate of William B. Spooner, a successful Boston leather merchant and philanthropist. Spooner, the uncle of then-KU Chancellor Francis Huntington Snow, had placed no restrictions on the use of his donation. The bulk of these funds, approximately $80,000, thus went to fill a desperate University need, that being a new freestanding library. Completed in 1894 and named in honor of its benefactor, the Henry van Brunt-designed Spooner Library – now known as Spooner Hall – stands today as Mount Oread’s oldest continually used academic structure.

Adequate library space was hardly the only thing the not yet 30-year-old University of Kansas lacked at this time. Also missing was an official chancellor’s residence, which forced KU’s early chief executives to keep their own private homes in town. Perhaps it was only fitting, then – considering the Spooner endowment’s familial origins – that when KU decided to spend the remaining $12,000 to construct a proper chancellor’s quarters, Chancellor Snow should be the first one to benefit. 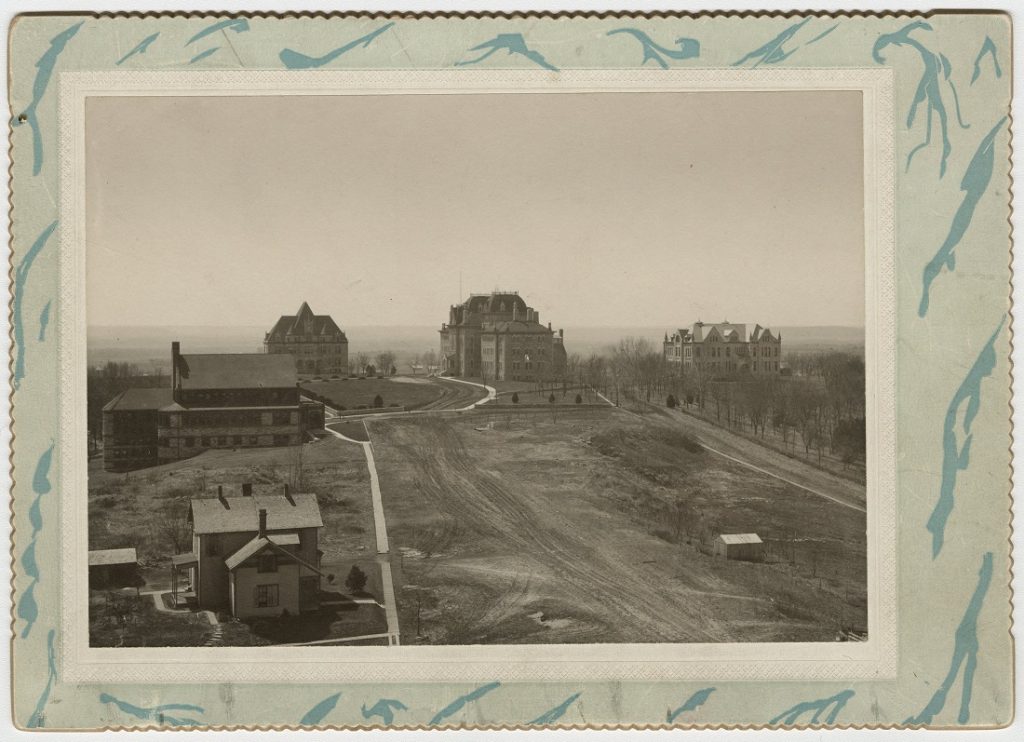 From left to right are Spooner Hall, Old Blake Hall, Old Fraser Hall (roughly where modern Fraser Hall is located), and Old Snow Hall. Also visible is Marvin Grove – the area of trees on the right side of the photo. The empty area on the right is where Dyche Hall and the Kansas Union now stand. It’s a snowy day on Mount Oread, so this week’s photo shows what a snow-covered KU looked like roughly one hundred years ago.