Spinsters Books and Webbery, Inc., originally named Spinsters Books, was founded in 1979 in Lawrence, Kansas. The store and community center was organized by a group of Lesbians “to meet the social, educational, and informational needs of the Lesbian and women’s community.” When the store opened in March 1980, it consisted of one bookshelf in a private residence before later moving to a storefront.

The collective also worked closely with other community and KU campus groups such as Women’s Coalition and Women’s Transitional Care Services. Not only was Spinsters unique due to the nature of the store and the services it provided, but it was run largely by the organizers, a group of dedicated volunteers, and part-time employees.

The Spinsters Collective also published a newsletter called the Monthly Cycle. The purpose of the newsletter, as stated in the first issue, was “for sharing skills, services, thoughts, and ideas.”

Any submission by or for Lesbians was accepted. The goal was to foster communication within the Lesbian community, especially in more isolated areas of Kansas and the region.

In August 1988, Judy Brown, Elsie Hughes, Dana Parhm, and Paula Schumacher, members of the Spinsters Collective, made the difficult decision to sell or close Spinsters Books and Webbery. A store sale notice was published on August 18, 1988. The asking price of $7000 did not include the contents of the library, archives, and furniture, nor did it include the name. In November 1988, the store’s office supplies, fixtures, and décor were sold at auction.

The Spinsters Collective donated the archives and business records to Kenneth Spencer Research Library in the spring of 1990. Researchers interested in the Women’s and Gay Rights Movements should look at the materials in the Spinsters Books and Webbery, Inc. collection. It contains a verity of information on various women’s issues such as the equal rights, sexual discrimination, abortion and birth control, and domestic violence. There are also numerous Lesbian periodicals and newsletters, as well as other records regarding the LGBTQ+ movement. The newsletters and periodicals are from various local, regional, and national organizations.

As Hispanic Heritage Month draws to a close I would like to draw attention to three oral history collections housed in the Kansas Collection at Kenneth Spencer Research Library. These collections speak to the everyday lives and experiences of the Hispanic communities in Garden City, Emporia, and Kansas City, Kansas.

The collection I’m going to highlight is the Oral History Project Regarding the Hispanic Community of Garden City, Kansas (RH MS 750). The collection consists of interview transcripts, audio tapes, and photographs. This project was funded by a grant from what is now Humanities Kansas.

For example, in her interview Cipriana “Sue” Rodriquez spoke about the harsh conditions and treatment her father faced as part of the working class in Mexico before coming to Garden City to work for the railroad, originally in 1900. Cipriana also discussed living in a railroad house, her experience in school, the family’s work experiences, and the strong sense of community among the Hispanic families.

Similarly, Lydia Mendoza de Gonzalez and Louis Mendoza discussed the conditions in Mexico that lead to family members coming to Garden City around 1900. They spoke of growing up in a culturally traditional Mexican household and the discrimination faced by the Hispanic community. A primary focus of this interview was education and Lydia’s efforts to help members of the community get the financial support they needed to attain a vocational education.

The other oral history collections are the Oral History Project Regarding the Hispanic Community of Emporia, Kansas (RH MS 751) and the Kansas City, Kansas, Spanish Speaking Office Interviews and Slides (RH MS 752).

One hundred and fifty-seven years ago, on August 21, 1863, William Clarke Quantrill and his men rode into Lawrence bent on destroying the town. The results of the dawn raid were the destruction of numerous businesses and homes and 143 deaths. State officials and people from surrounding towns provided aid to Lawrence to help meet the basic needs of the residents and to rebuild the town.

Although her family lived in Lawrence, Anna Julia Soule was a school teacher in Kanawaka, six miles to the west, at the time of the raid. That morning, she saw the smoke coming from Lawrence, and would later recall that “we (the citizens) knew that a raid had been feared but vigilance had been relaxed and, concluding that there was not much danger, the town had stopped keeping guard at night” [1].

When Anna reached Lawrence after the raid, she found her high school teacher among the dead at the first house she stopped at. Upon locating her brother William Soule, Anna learned that her the rest of the family were safe, but that the family’s house had been destroyed. They had nothing except for the clothes they were wearing. The family stayed at the home of prominent Lawrence physician Sylvester B. Prentiss in the days following the raid.

Anna briefly return to Kanawaka to teach after the raid, but not for long. As she would later write, “the term was nearly out and the excitement made teaching difficult, as even in the country the raid was the only thing in all our minds” [2].

Instead of completing the term, Anna decided to go to Maine with her mother and sister to live with family and friends for a time. Of the first leg of the journey back east, she wrote,

“We went on the stage to Leavenworth, borrowing bonnets for the trip so far and sending them back on the stage. The people of Leavenworth were very kind, the women meeting daily to sew for the Lawrence sufferers and offering us help, but we only accepted such things as seemed necessary for our journey, as the people in Lawrence were in greater need than we were, for we were going to our friends who gladly helped us” [3].

The ladies returned to Lawrence in 1865 to find the town rebuilt. On June 21, 1866, Anna married Dr. Prentiss. Over the years, she was an active participant in the Lawrence community. She was involved in Lawrence’s temperance organization, was a founding member of the Lawrence No Name Club, active in her church, and took part in the reunions held by raid survivors. Anna was also the proprietor of a home goods store for several years.

Anna wrote about her experiences during Kansas’s territorial period for publications and the various clubs, organizations, and activities in which she was involved. Letha Johnson in front of Jayhawker Yearbooks which are part of the University Archives
reference collection found in the Marilyn Stokstad Reading Room at Spencer Research Library.

I am responsible for overseeing the appraisal, processing, management, and accessibility of records in the University archives regardless of physical format.  I work towards expanding the archives responsibility of the University’s electronic records and provide records management, reference, and outreach services across campus and beyond. I also ensure space is allocated for proper storage and order of collections in all formats and that knowledge of locations is maintained. By utilizing recognized standards and methodologies in managing digital collections and electronic records and media, I work towards expanding the availability of digital collections on the library website.

How did you come to work in archives?

I wanted to do something in the history field besides teaching in secondary education.

KU’s first account ledger from 1864 to 1867.  It has the names of prominent figures in KU, Lawrence, and Kansas history.

There’s a great deal of variety in my job, so it’s always interesting. I learn something new almost every day.

What are your favorite pastimes outside of work?

Reading and hanging out with my family and friends.

Don’t be afraid to ask for help or to ask questions in general.  The staff is here to help.

In honor of Hawk Week 2012, the festivities that mark the beginning of the fall semester, we bring you some images of Hawk Week events from the late 1990s. KU alumni may recall Traditions Night, Beach-n-Boulevard, Jayhawk Playfest, and the Rock-a-Hawk Dance. 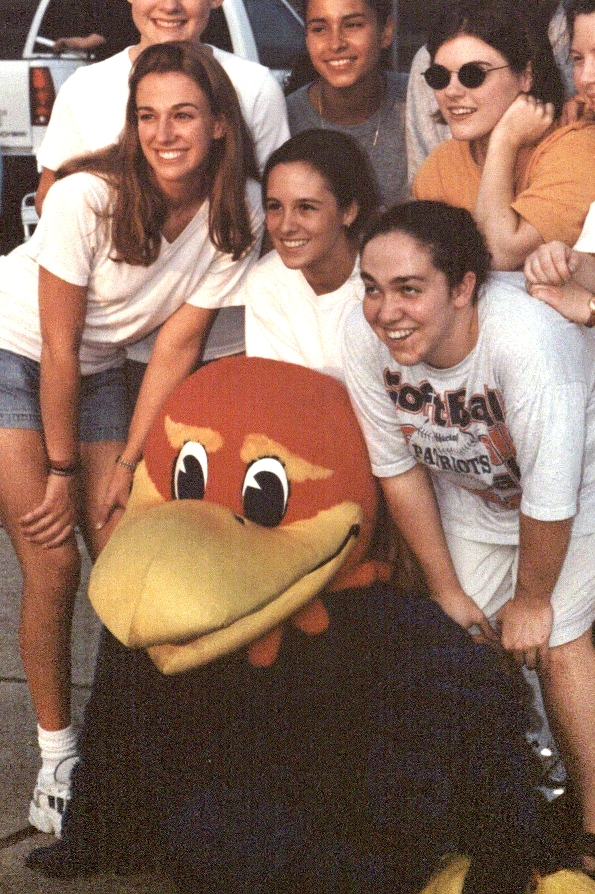 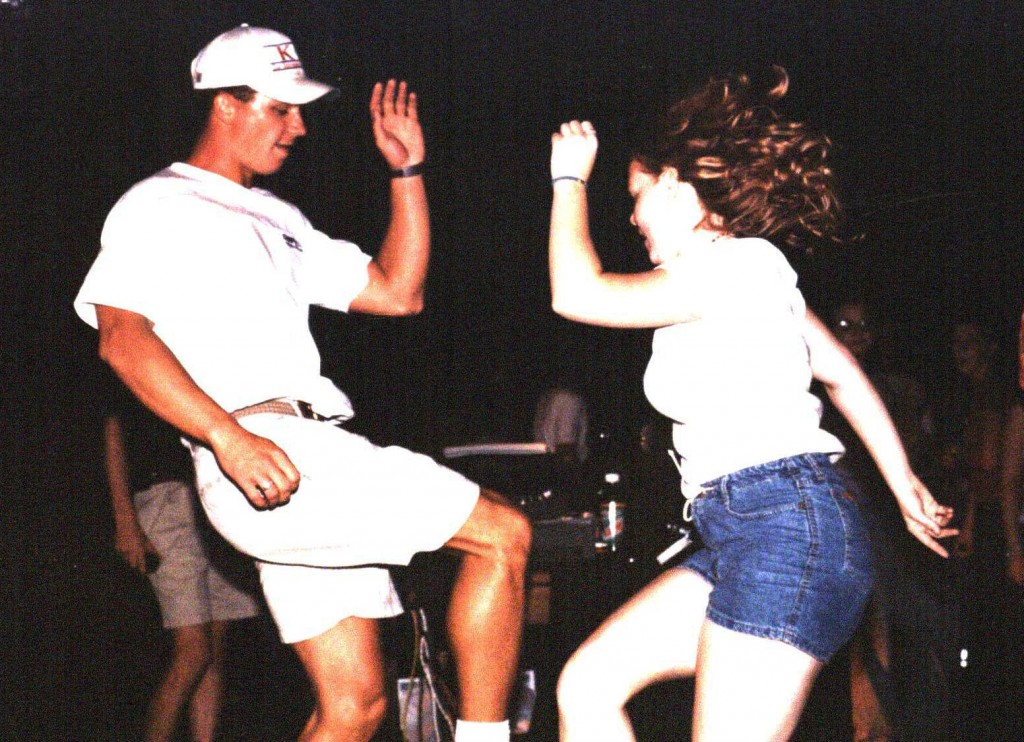 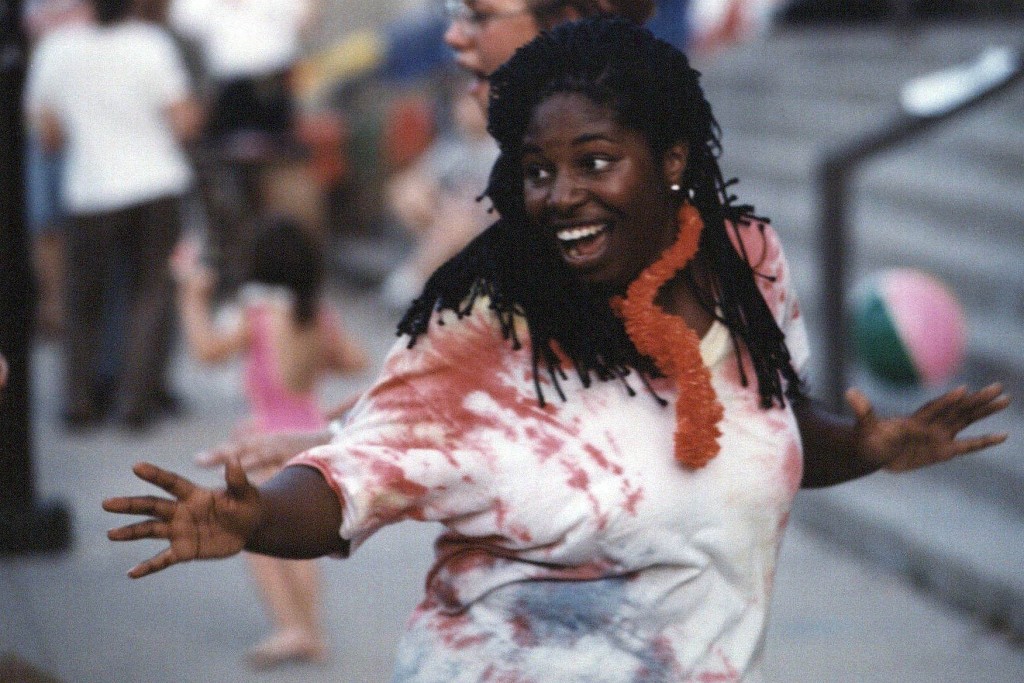 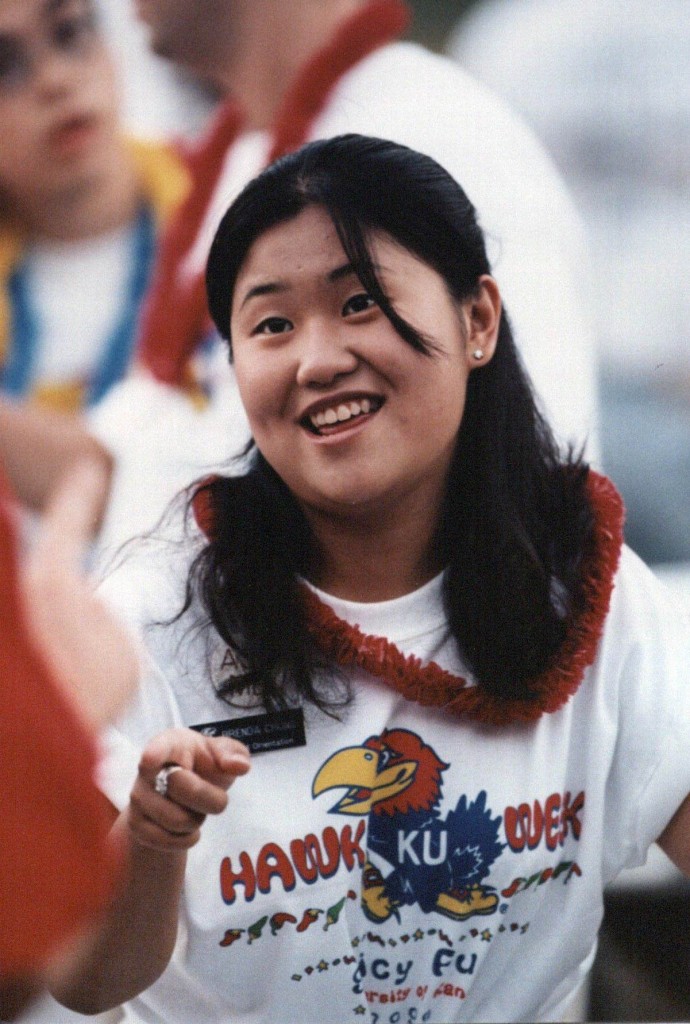 A poll from August 2011 in the University Daily Kansan listed Traditions Night as the readers’ favorite Hawk Week event. What was yours? 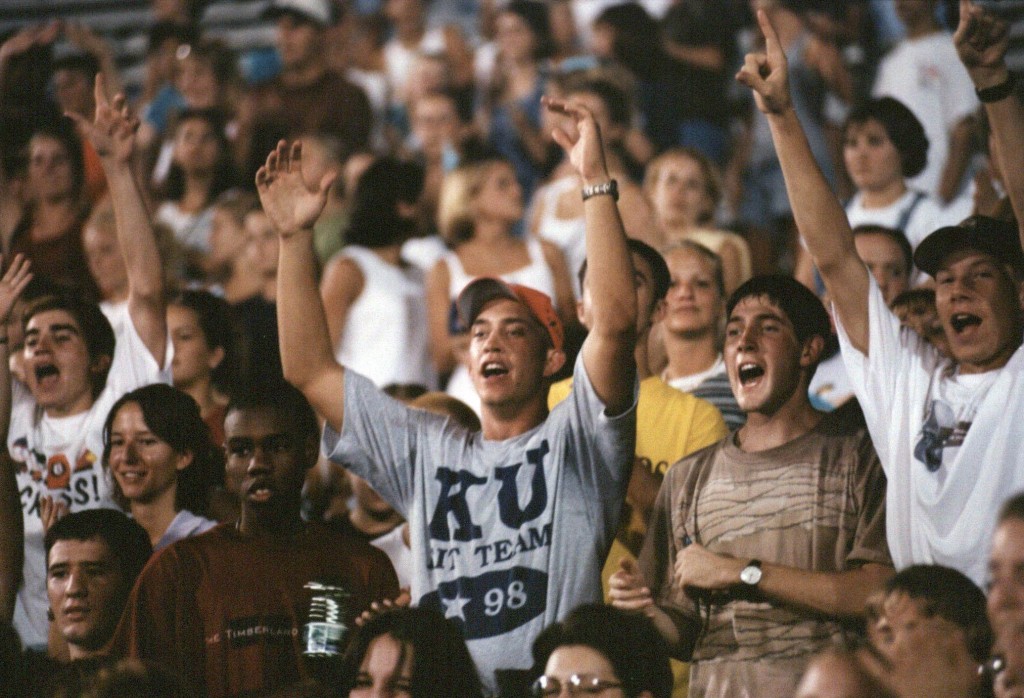 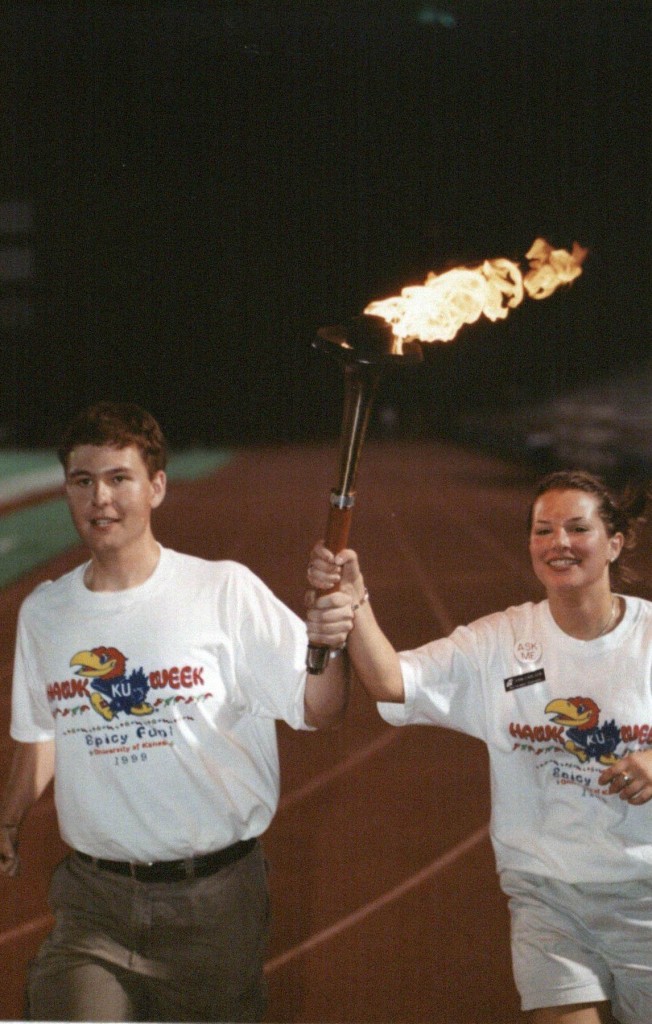 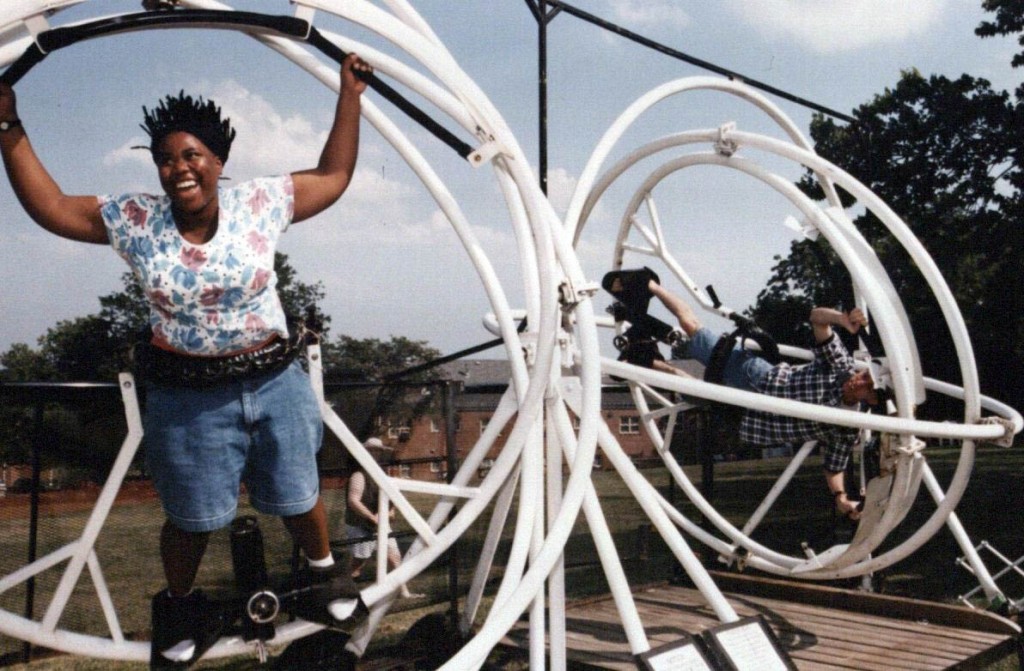 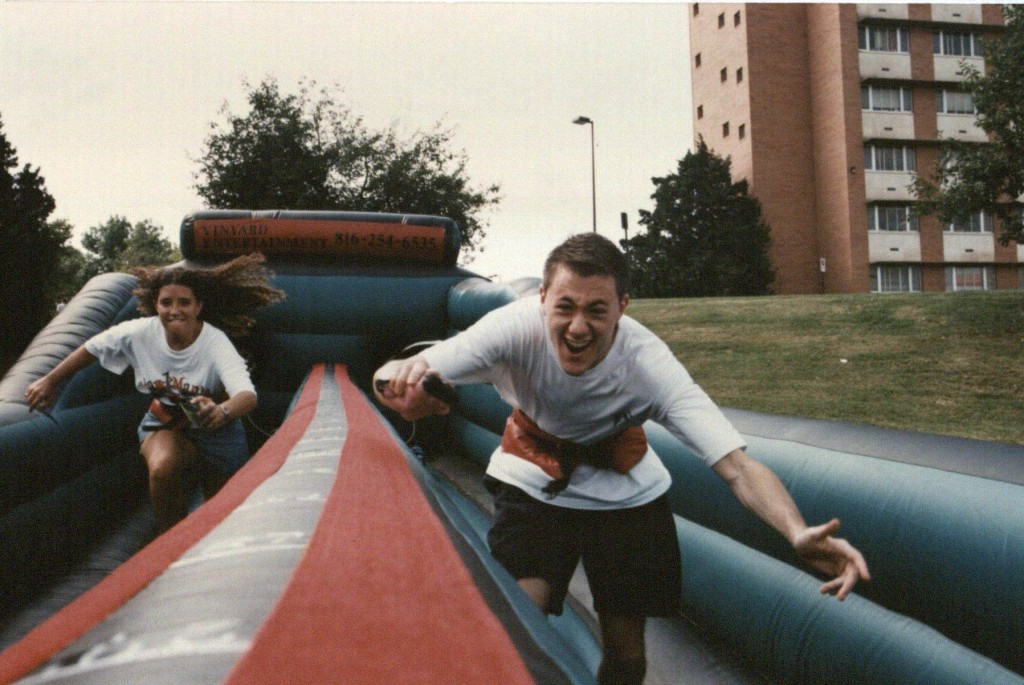