New to the blog this week is the first of many posts in a series called That’s Distinctive! I created the series because I genuinely believe there is something in our collections for everyone, whether you’re writing a paper or just want to have a look. That’s Distinctive! will provide a more lighthearted glimpse into the diverse and unique materials at Spencer – including items that many people may not realize the library holds. The series will be posted weekly on Friday with occasional breaks. If you have suggested topics for a future item feature or questions about the collections, feel free to leave a comment at the bottom of this page.

In honor of the return of students to campus, this week’s post highlights KU Jayhawker yearbooks. Here at the library, we have yearbooks ranging from 1874 to 2011, the last year it was a print publication (with a few missing here and there). While I am only highlighting a few this week, all of the yearbooks in Spencer’s holding are available for viewing in the Reading Room.

These images show select pages from four yearbooks displaying the variety of advertisements located in/near the index of each book. As the years go on, each yearbook seems to feature fewer ads. It can be interesting to browse the various sections of the yearbooks, which can include clubs, headshots, ads, building photos, memories of the past year, and much more.

Tomorrow is National Puzzle Day! Celebrate by scrolling down and putting together this week’s image as a jigsaw puzzle.

Votes for Women!: The Suffrage Movement at the University of Kansas

The credit for the success of the women’s suffrage movement in the United States seems to always go to women like Susan B. Anthony, Elizabeth Cady Stanton, and other well-known women who fill the history books. While they most certainly deserve all of the accolades given to them, much of the groundwork for equal suffrage was done at the local level. These well-organized suffrage leagues and associations were part of a national network of volunteers, all working for one common purpose. The women, and often men, in these types of small, grass-roots groups were no less passionate about suffrage for women as their more famous counterparts.

Membership consisted of students, faculty, and staff. The first administrative sponsors of the KU league were Dr. William H. Carruth, Professor of Germanic Languages and Literature; Dr. Arvin S. Olin, Professor of Education; and Carrie Watson, Librarian. Student leaders were chosen from among the members. The women shown here were the officers of the KU chapter of the College Equal Suffrage League for 1909. Also shown is the often patronizing write-up that accompanied their senior class pictures in the yearbooks.

Evidence suggests that the KU League only existed until 1912, and disbanded after women in Kansas had been granted the right to vote in national elections. An article in the December 12, 1912, issue of the University Daily Kansan reports that the League met to “decide whether or not to disband, now that suffrage has carried in Kansas.” There is no mention of the KU League in the university yearbook or newspaper after this date, and, unfortunately, there are no known archival records for the student organization.

Today is America Recycles Day. Did you know that in the early 1970s KU operated a small recycling facility under Memorial Stadium? The centerpiece of the Reclamation Center was the Whomper, which acquired its name from the sound it made when crushing cans and bottles. 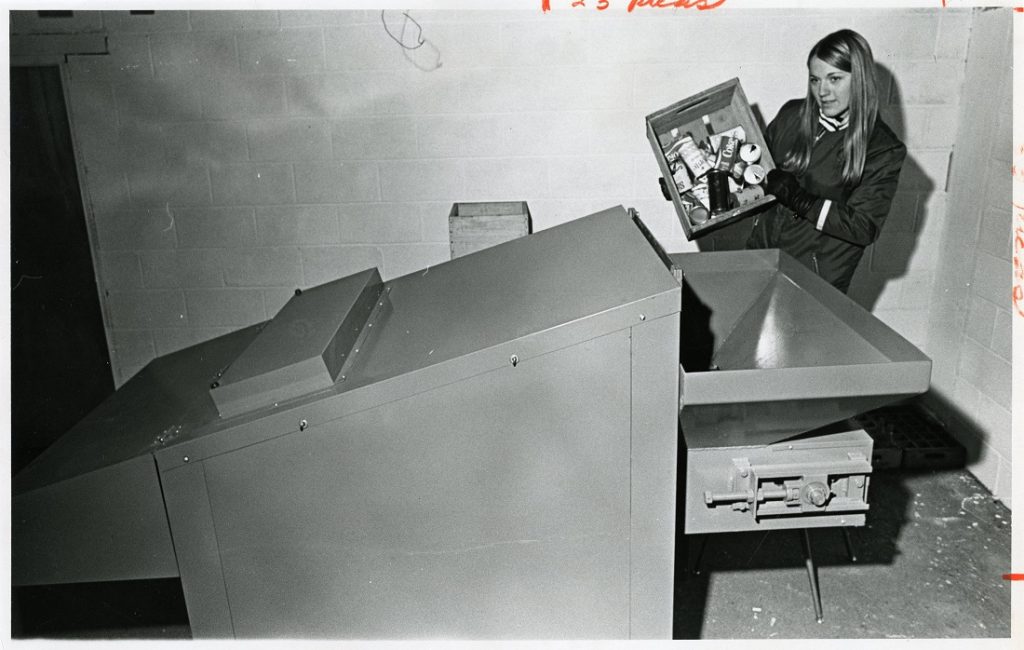 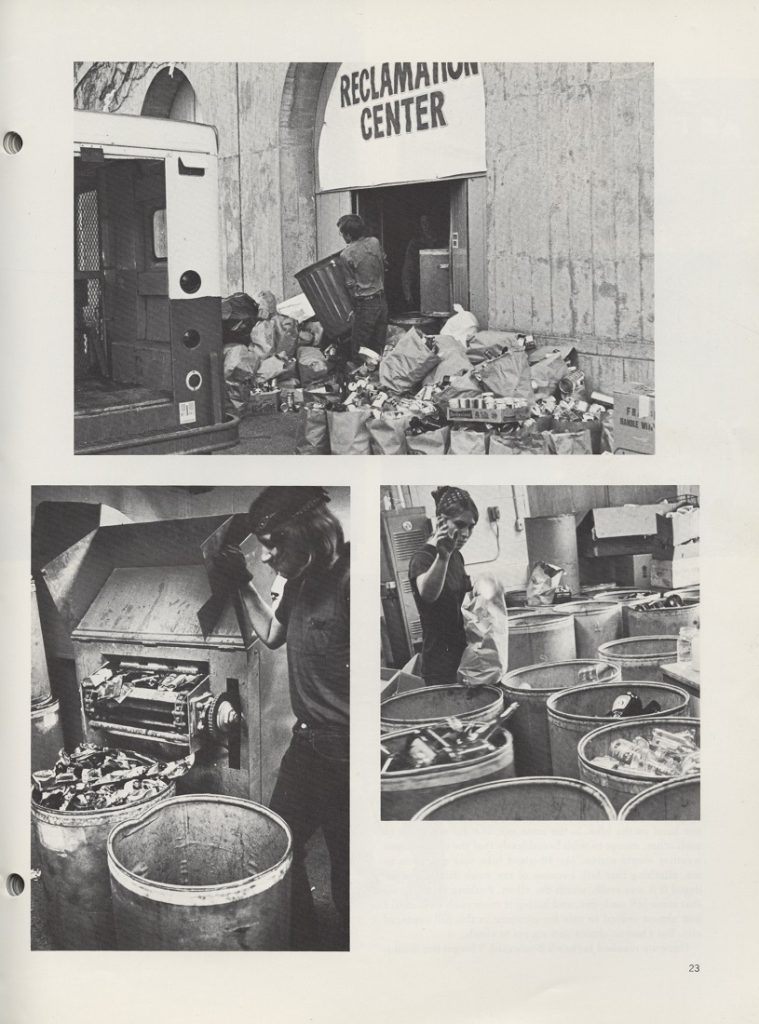 A group of KU students started the campus recycling program in January 1971. According to the Fall 1972 Jayhawker,

In the fall of 1970, Steve Emerson, then a Topeka junior, introduced a bill to the Student Senate which, if it had been accepted, would have banned all vending machines from campus. From this humble beginning the University of Kansas “Whomper” was born.

The Reclamation Center was the brainchild of the Coca Cola Company and the Union vending service. Because the banning of vending machines would have meant tremendous losses of revenue to both companies and because both were environmentally concerned, they agreed to finance the project. The Coca Cola Company agreed to loan the machine to KU indefinitely, and the vending service financed the installation of the Whomper in Memorial Stadium…Both companies continue to provide support for the Reclamation Center…

All funding for operations comes from outside the University with the exception of Student Senate support for pick-up service and for a reclamation director.

According to an article in the University Daily Kansan on September 16, 1971, students and others could “bring glass and cans to the Reclamation Center from 12 p.m. to 6 p.m. on Thursdays and Sundays when the [Whomper] is actually in operation, but there is a chute at Gate 22 at the north end of the stadium for material to be deposited at any time.”

The Reclamation Center faced several challenges and was plagued by debts throughout its nearly six year history. The project relocated from Memorial Stadium in May 1972 and lost its Student Senate funding in late 1973. A nonprofit organization called Whomper Inc. continued the recycling program at various locations in Lawrence before it closed in late 1976.