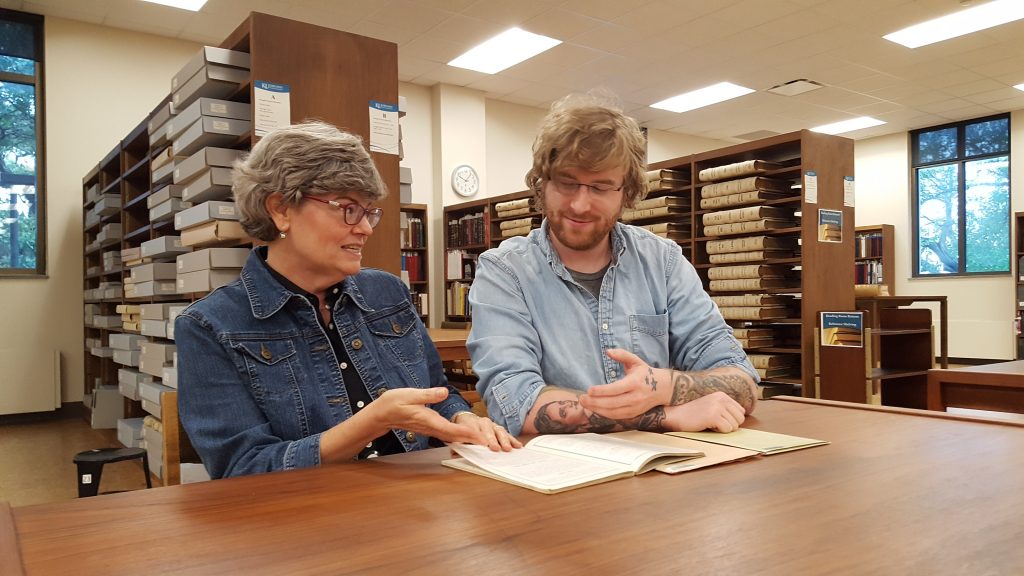 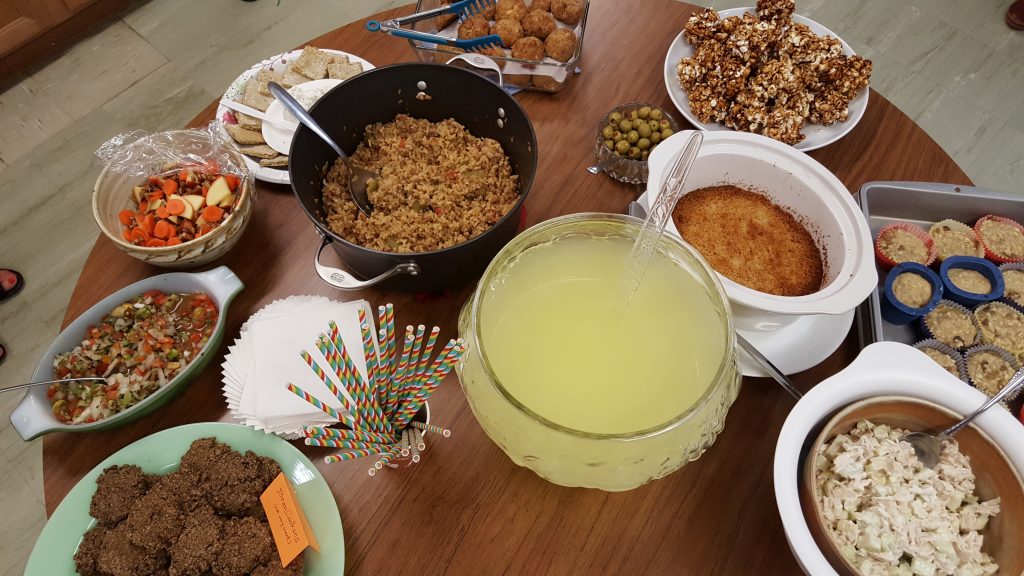 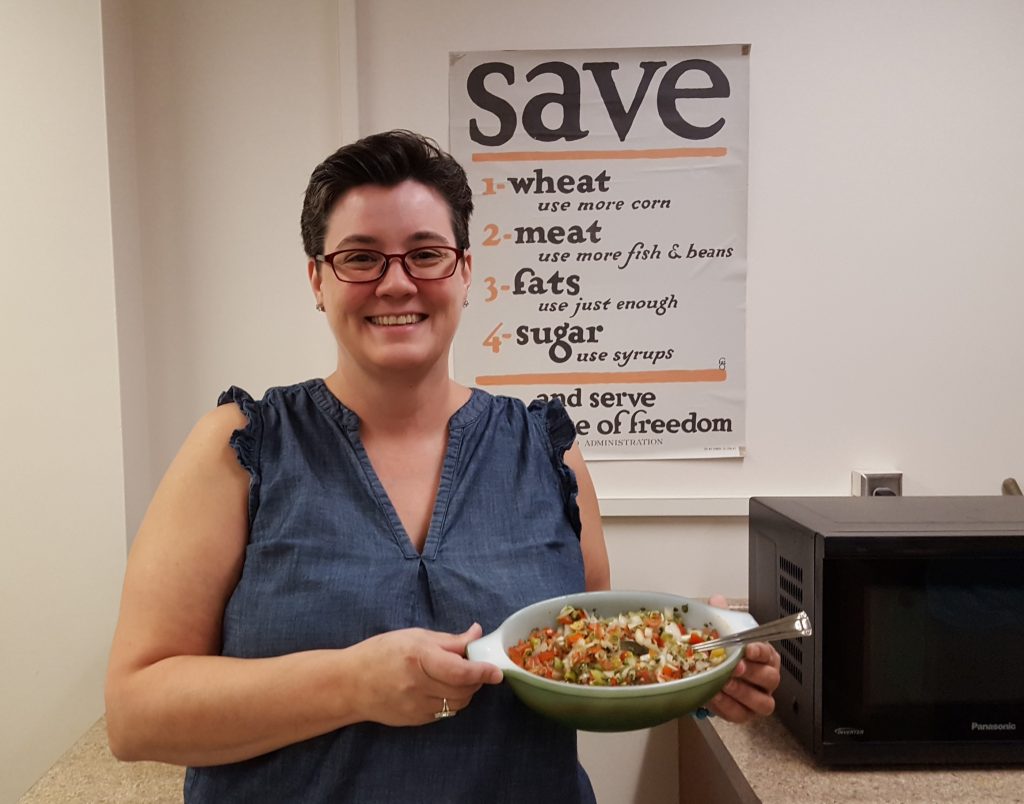 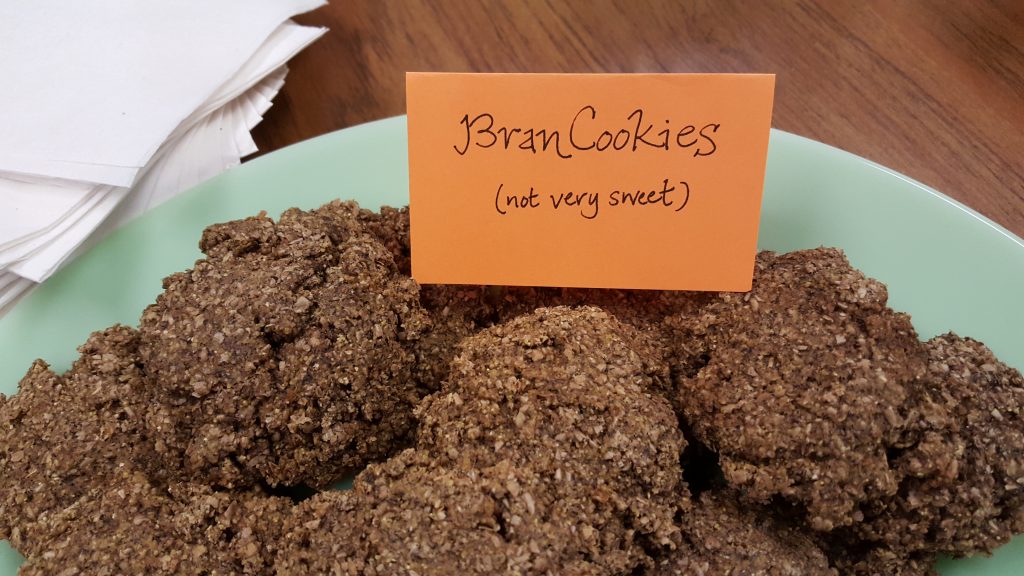 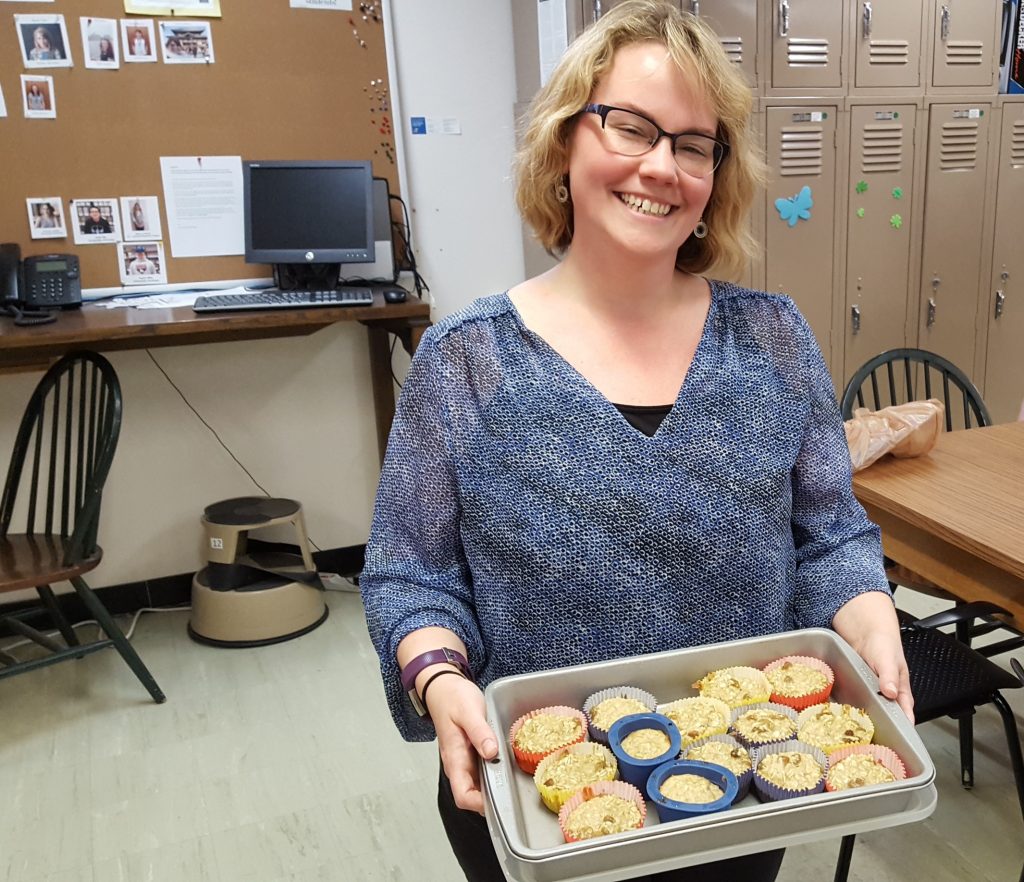 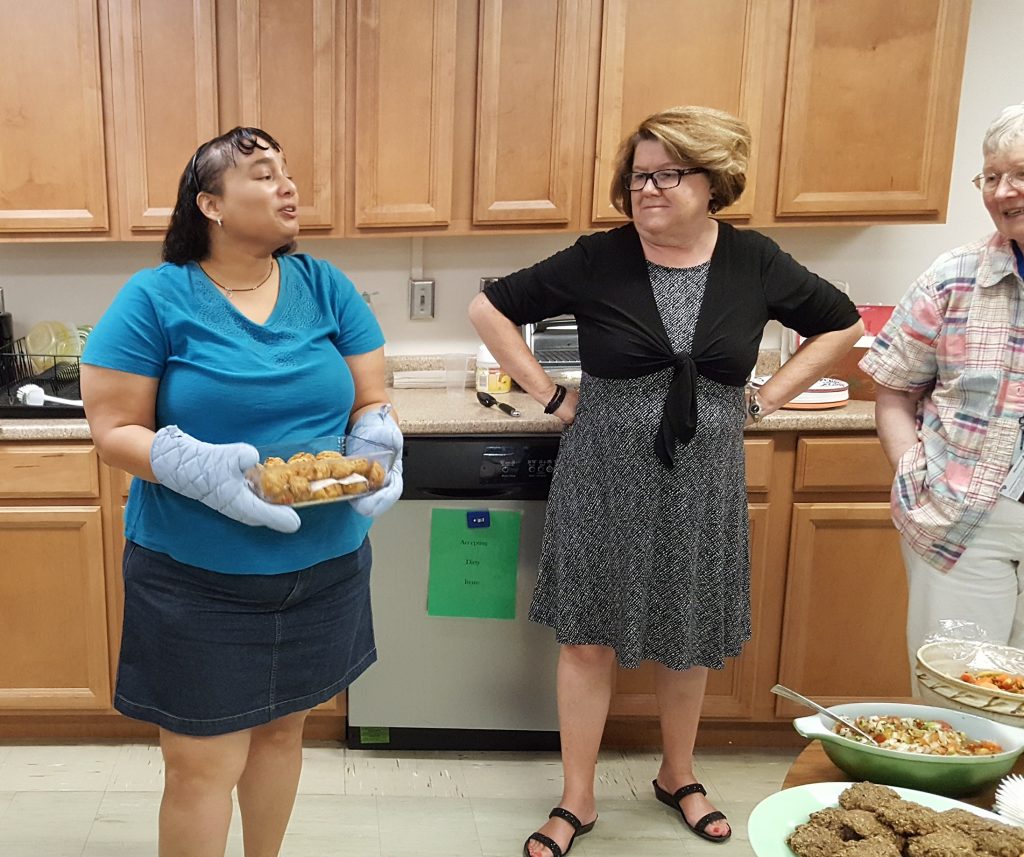 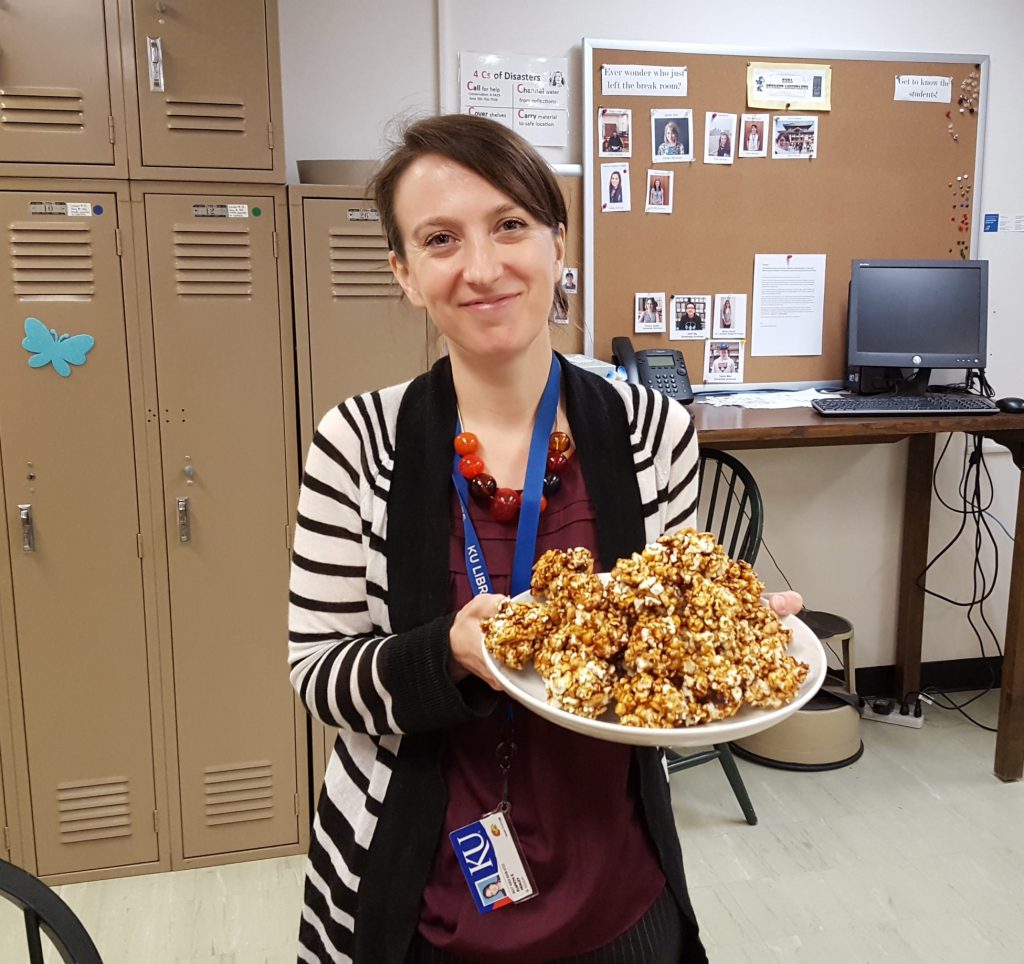 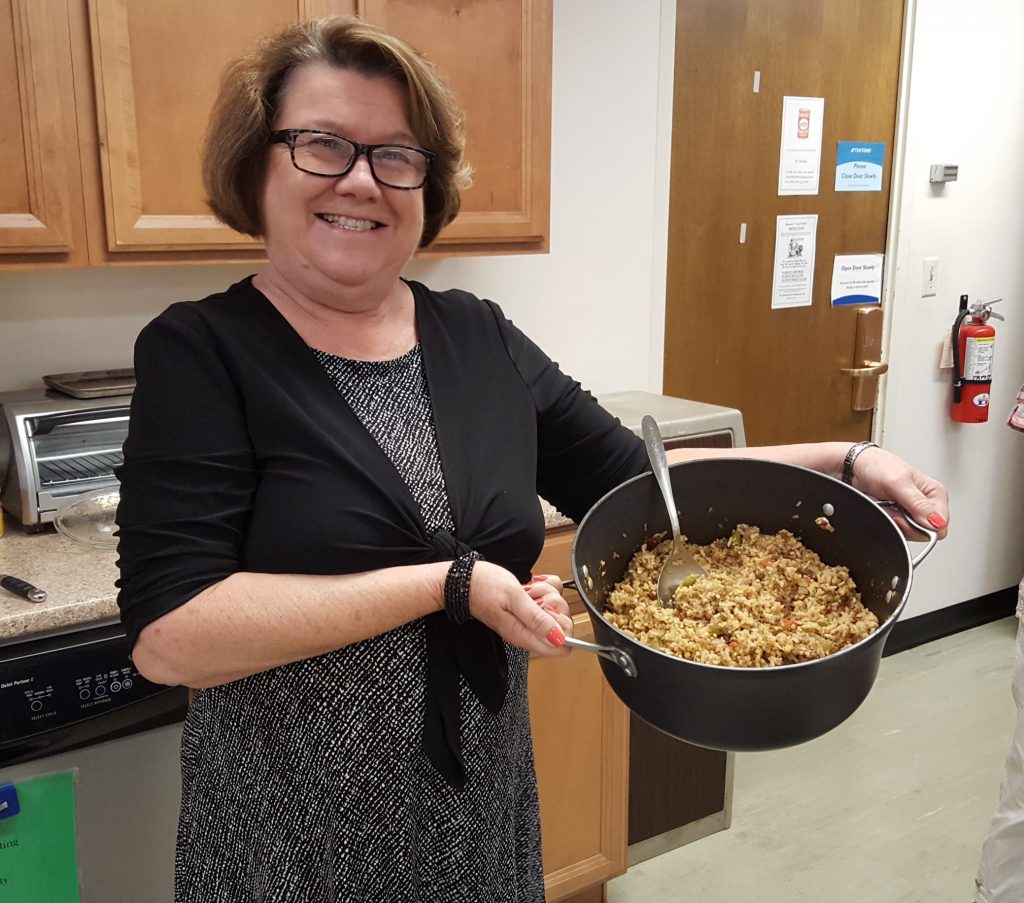 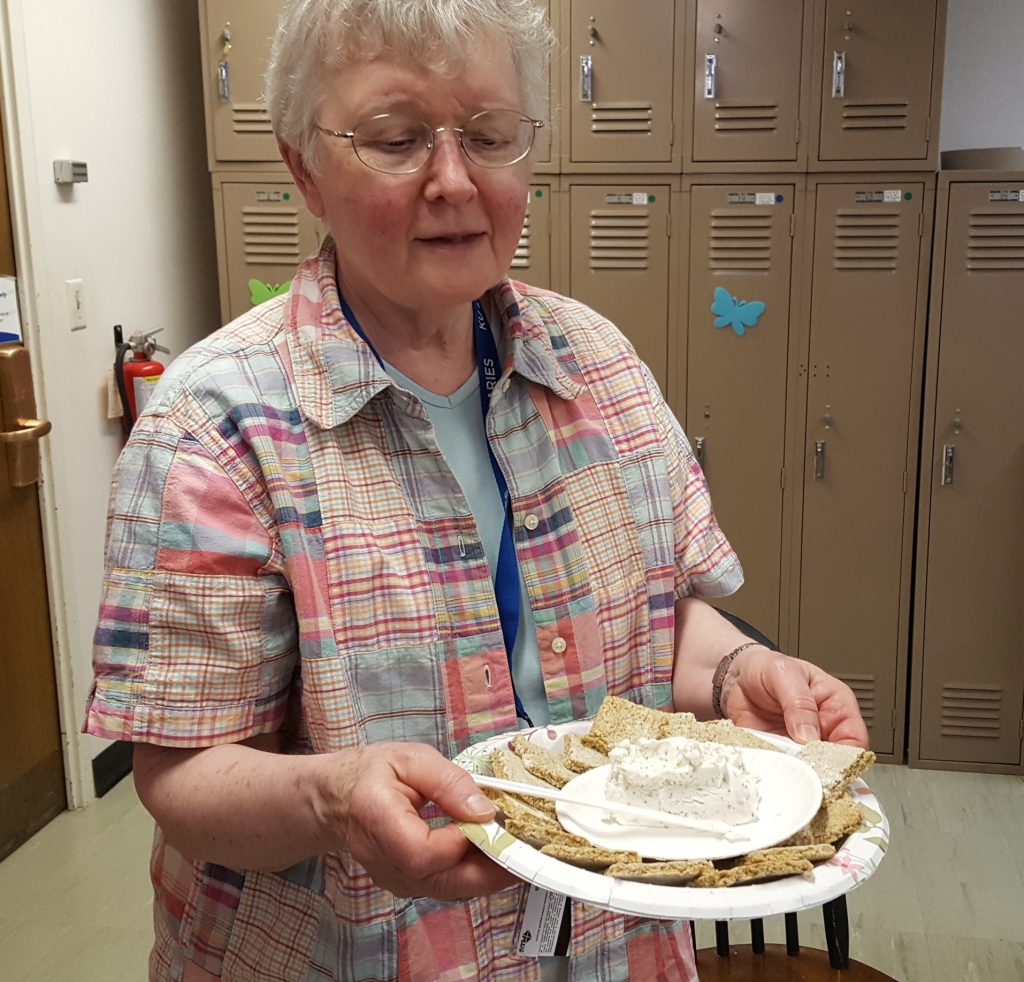 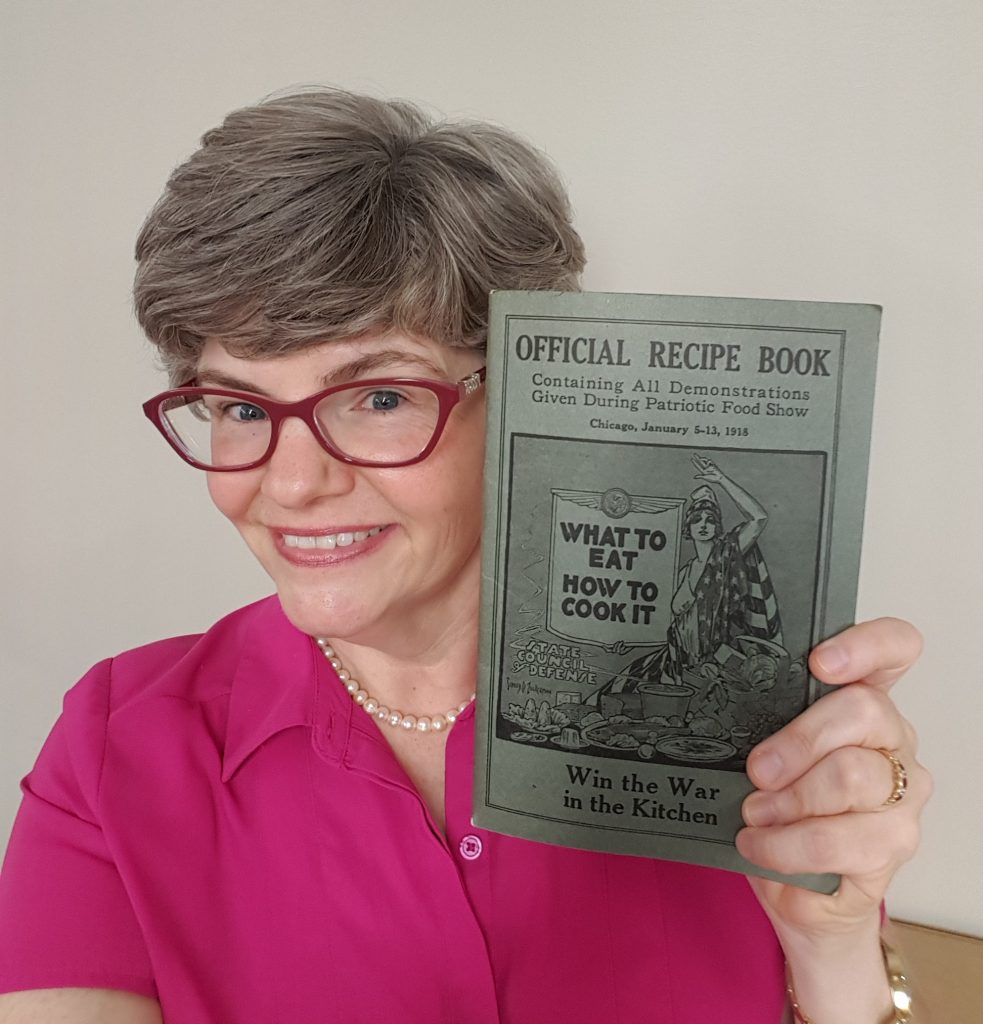 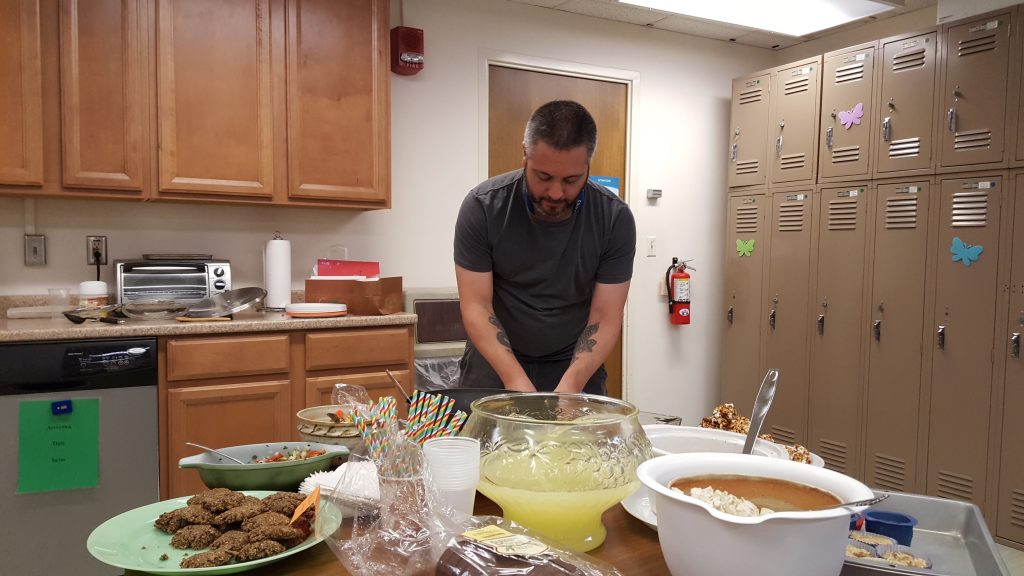 When manuscript collections – the papers, letters, documents, photographs, and/or diaries of an individual or organization – are acquired by the Spencer Research Library, they need to undergo processing in order for them to be ready for researchers to use them. Some collections need more processing than others in order to make them accessible. While we process the collection, we create a finding aid so researchers know what is in the collection.

This blog post will use the Jane Wofford Malin Collection (Call Number: RH MS 1444) to illustrate what processing entails. 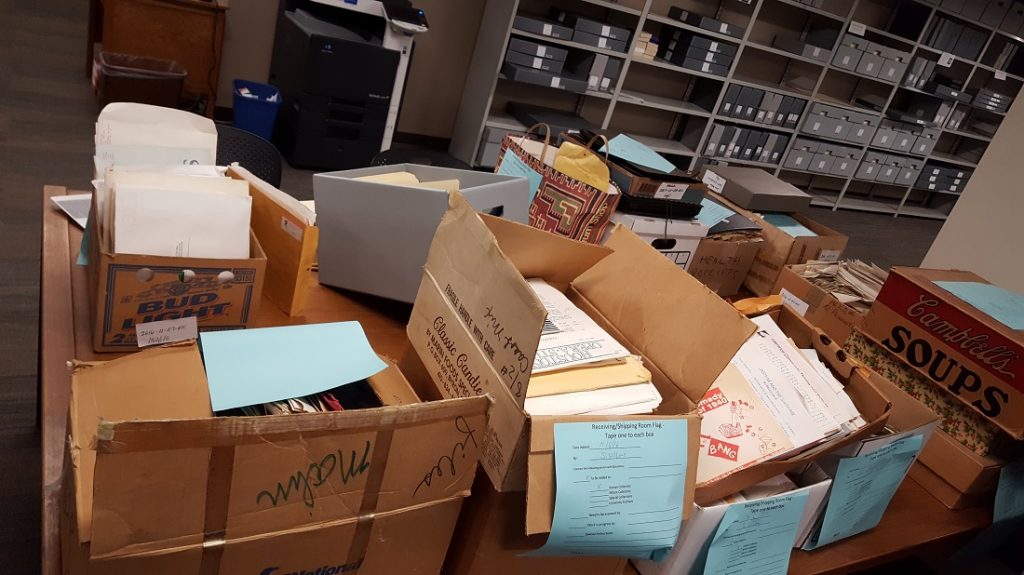 The “before” picture of an unprocessed donation to Spencer Research Library.
Click image to enlarge. 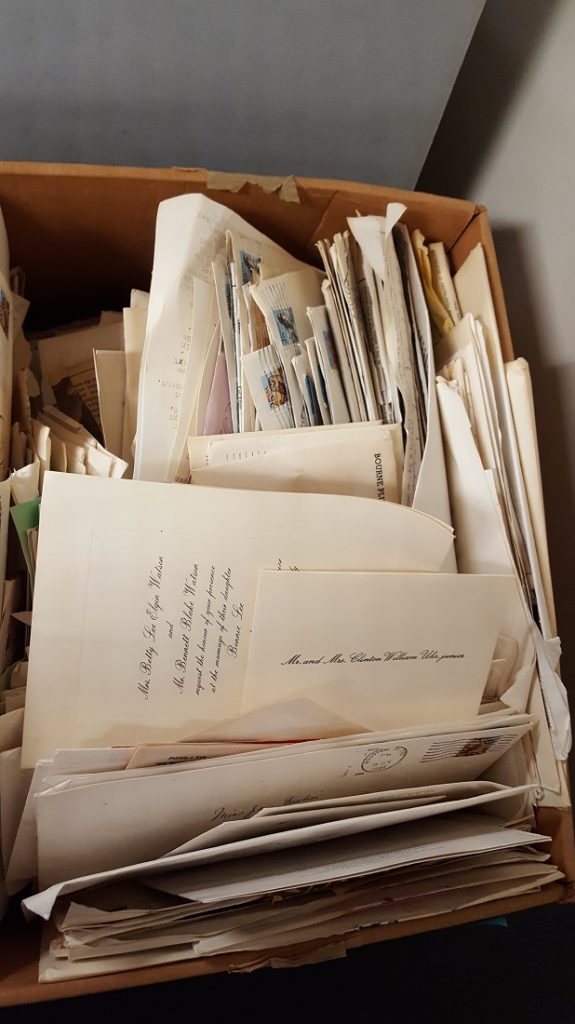 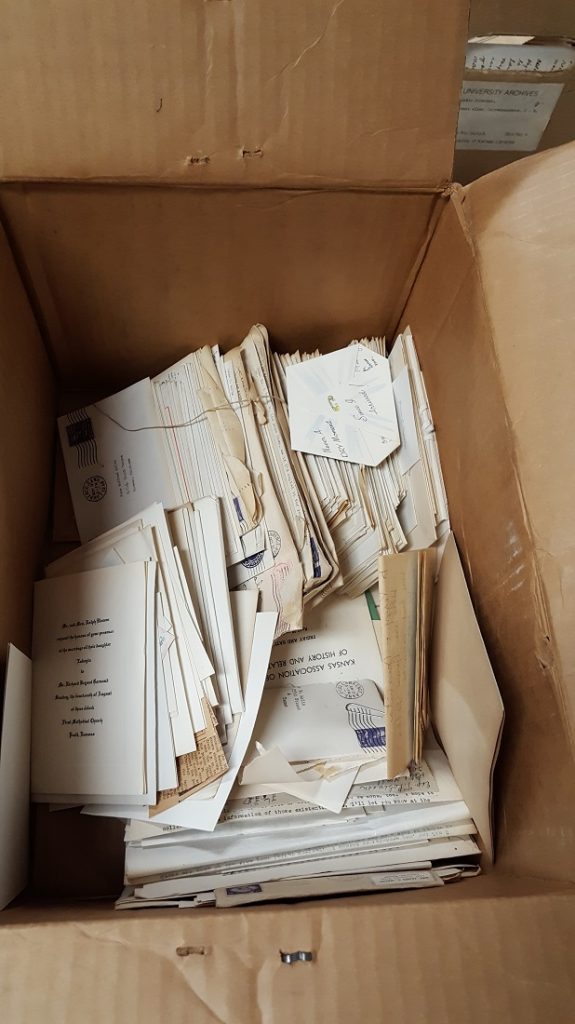 Sometimes collections are pretty large. Even a small box can contain hundreds of letters!
Click image to enlarge. 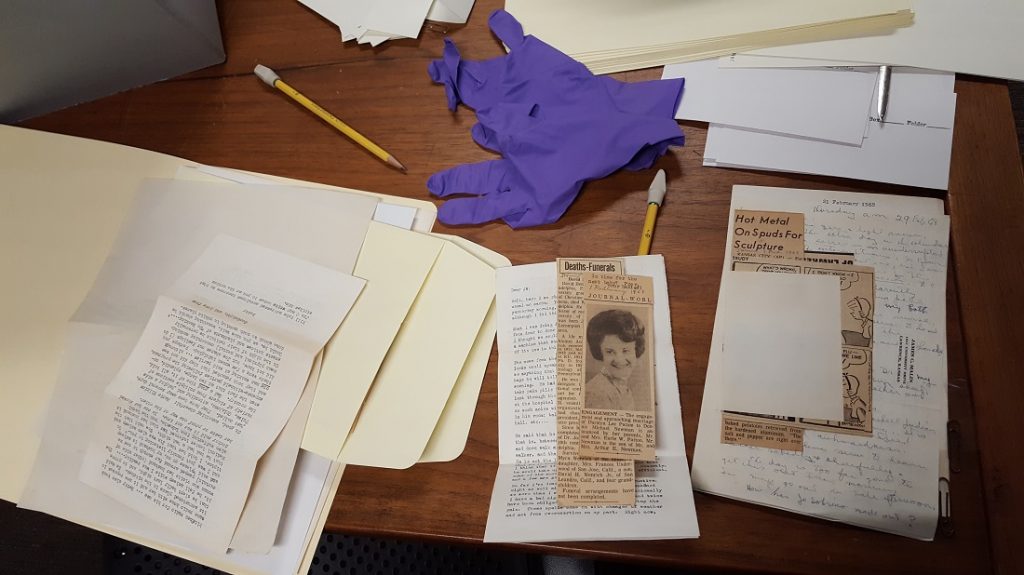 Correspondence is unfolded and put into acid-free folders so researchers can
access them easily. The folders will be put into acid-free boxes. Notice the pencils
in the photo above? We use those to label the folder. We never use ink pens
around archival items. Researchers are also required to leave their ink pens behind
when they enter the research room here. Click image to enlarge. 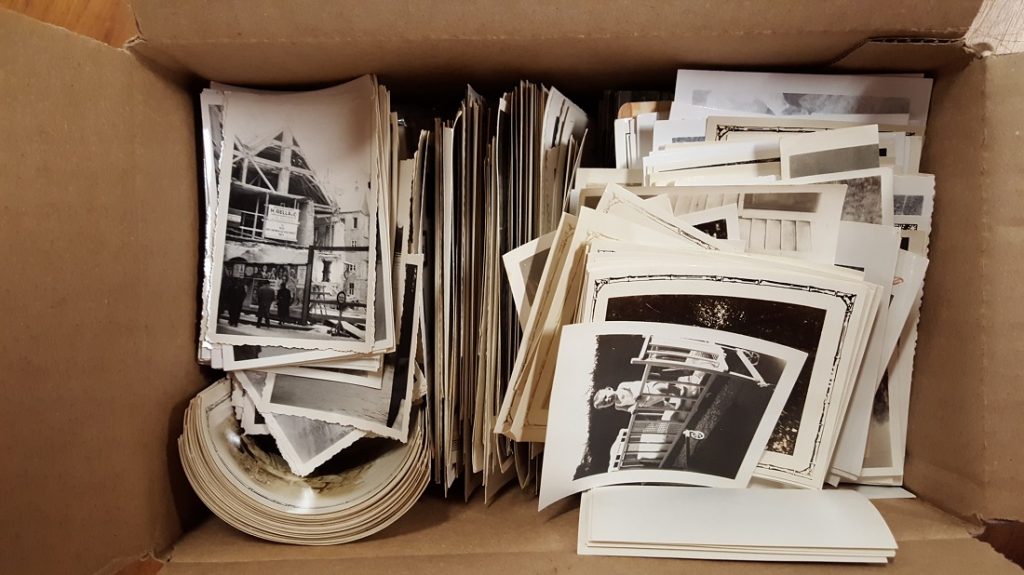 This donated box contained hundreds of photographs. In order to protect the photographs and
make them useful for researchers, we put them into acid-free folders and
note the content so we can enter it into the finding aid. Click image to enlarge. 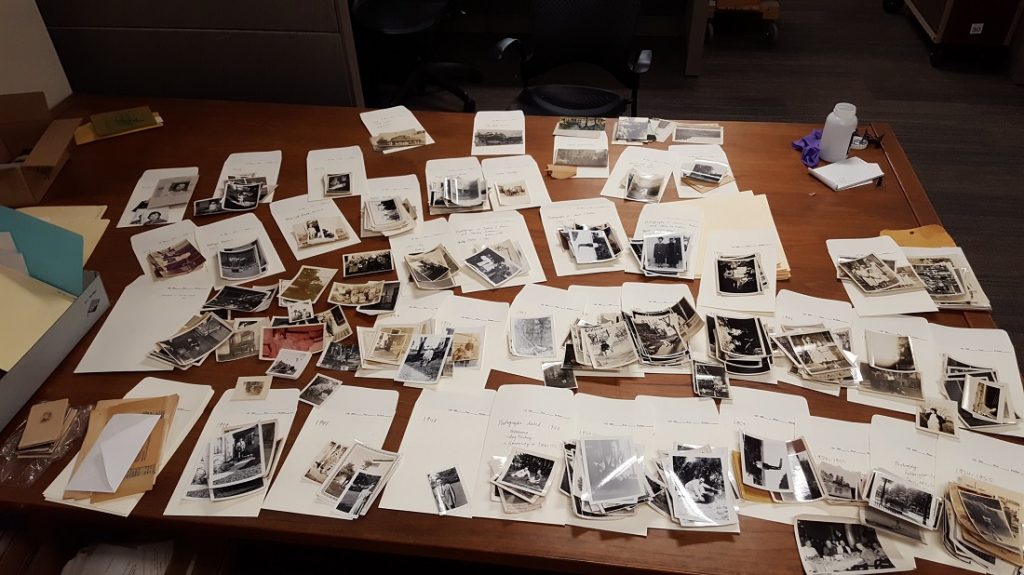 The photos from the box shown above were sorted into like-groups and by year.
On the far right corner of the work table, you can see the purple nitrile gloves worn
when handling the photos. We always wear cotton or nitrile gloves when handling photographs
so that our finger-prints don’t ruin the image. Researchers also have to wear gloves
when using photographs here at Spencer Research Library. Click image to enlarge. 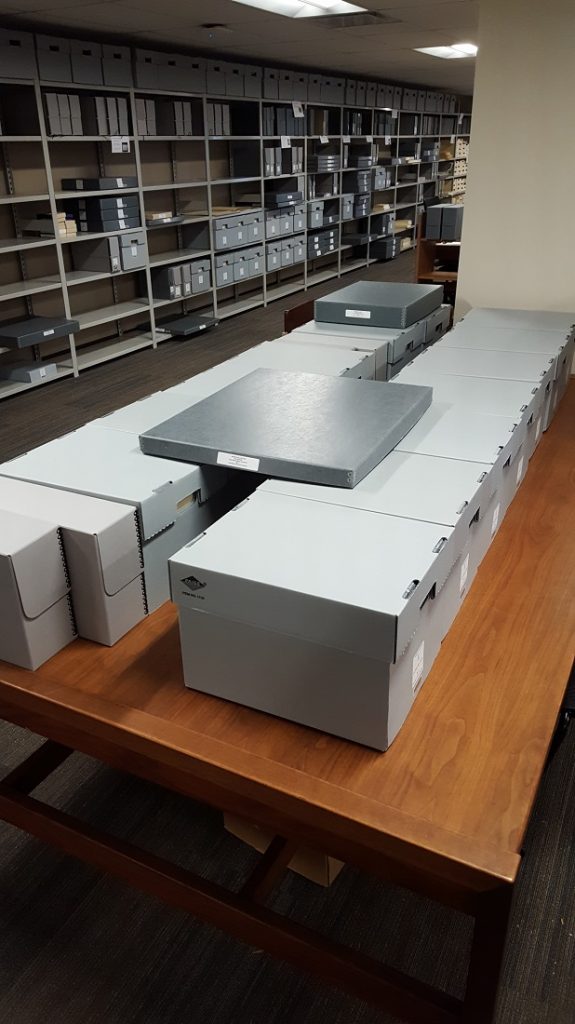 The “after” picture of a processed collection at
Spencer Research Library. Click image to enlarge.

Here is what the collection looked like after it was all arranged and organized. The larger boxes on top hold oversize documents, such as certificates and artwork, and an oversize scrapbook. Everything is ready to go to the stacks and wait for a researcher to call them into the Reading Room!

With the collection all organized, we put the finishing touches on the finding aid and publish it to our website. Try searching the finding aids for yourself and see what you can discover in the Spencer Research Library. If you need help, please don’t hesitate to ask the staff. We work hard to preserve history and to make sure that it can be used and accessed by you!

Where are you from?
Since most of my adult life has been spent in Lawrence, I like to say that’s where I’m from. I grew up in Missouri but attended the University of Kansas for my bachelor’s degree (anthropology) and masters (museum studies). I have moved from Lawrence a few times, but I keep coming back!

What does your job at Spencer entail?
How do researchers know what’s on the shelves in the archives? That’s my job. I work on making all the amazing information that is here in the library—in documents, letters, maps, photographs, diaries, drawings, scrapbooks, and records—accessible. I do that by processing donations and collections and then making finding aids for them online. Then the information contained in the donations and collections can be searched, found, and utilized. 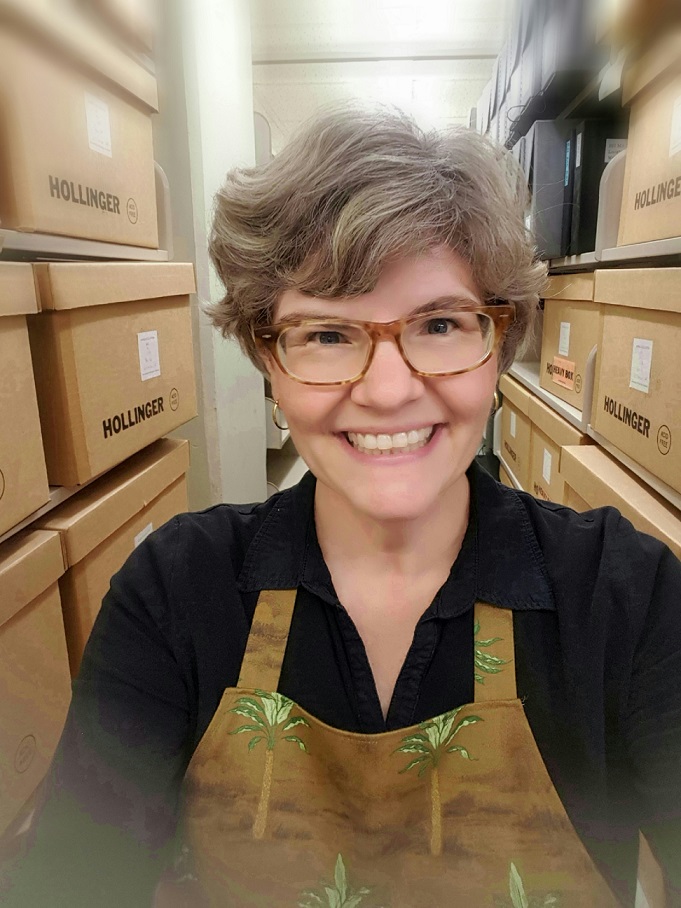 How did you come to work at Spencer Research Library?
This isn’t the first time I have worked at Spencer Research Library. When I was a graduate student in the Museum Studies program here at KU, I worked in the University Archives up on the 4th floor. That was my first archives position. Since then, I have had a long career working in a variety of museums, archives, and libraries. At each one, I have learned new skills, experienced many situations, and gained lots of knowledge! I’m happy to bring all this to Spencer Research Library where I can use all these skills and knowledge, plus learn even more from the excellent staff here. In a way, I’ve come full circle and now I’m back home.

What is one of the most interesting items you’ve come across in Spencer’s collections?
It’s hard to narrow down one, because I find it all so interesting! I have worked on some great collections since starting here in late October. But, I would have to say that I am most interested in the territorial Kansas and also the early KU history material. In the lobby of the Spencer Research Library there is a map of Lawrence from 1854 that I love to look at—especially since “Kansas” is spelled with a “z”—“Kanzas.” I also like to walk in the North Gallery and see a cross-section of all the fascinating collections that are in the library. I love looking at all of the books and exhibits in that beautiful space. 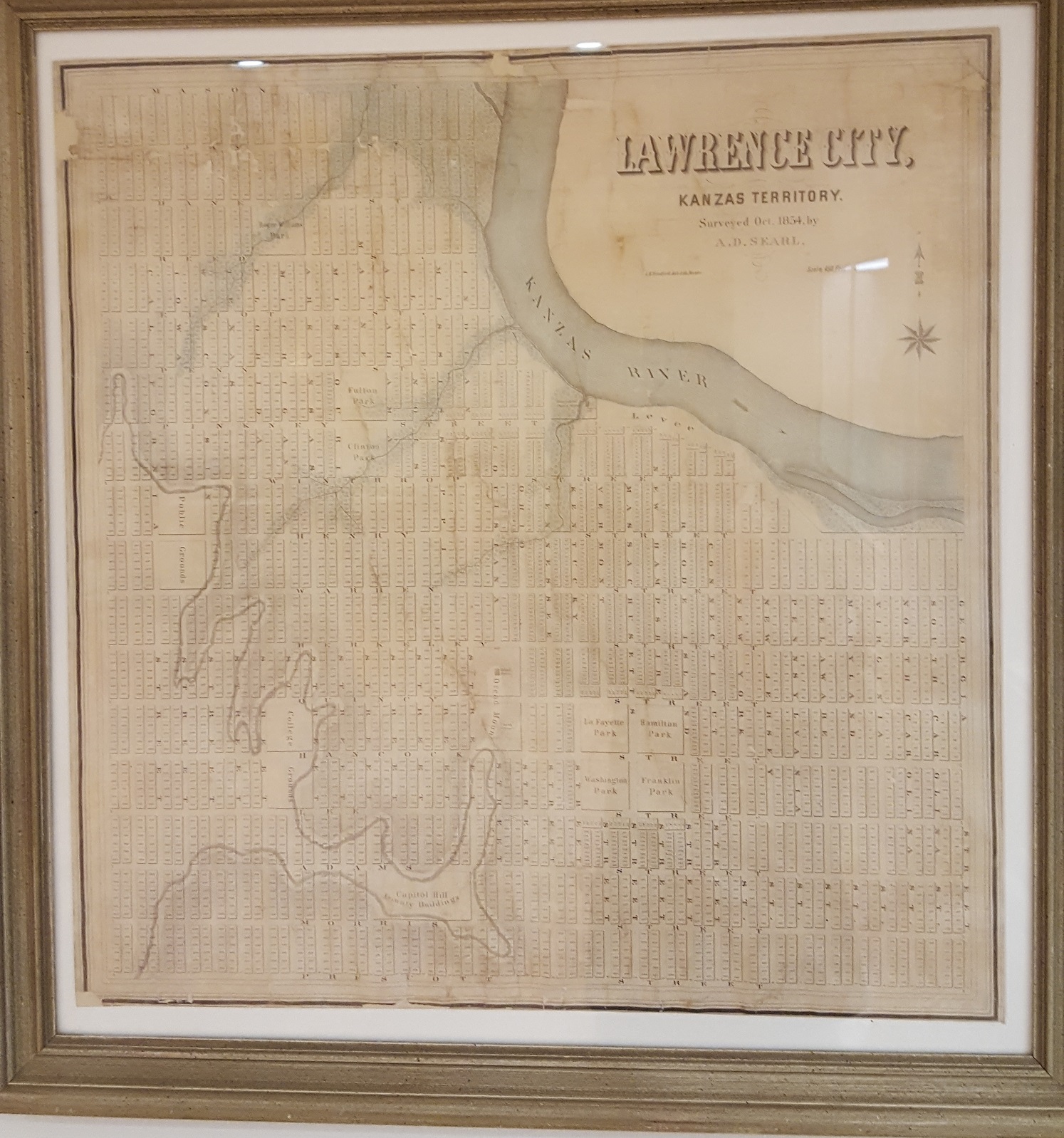 What part of your job do you like best?
I like the feeling of being part of a team. We are all working to make the collections accessible so that everyone—the public, historians, students, genealogists—can benefit from them.

What are some of your favorite pastimes outside of work?
I love, love, love to travel and explore. I’m happy going anyplace and doing anything. For example, a few weeks ago, I went with a friend on a fun daytrip exploring territorial history in Big Springs, Kansas. And last summer, my daughter and I found a cool shark’s tooth near Hays, Kansas. (I’m a huge dinosaur and prehistoric life fan.) I enjoy little adventures like that! I’ve got two teenage kids, so my husband and I spend a lot of our time involved in their activities. I also read a lot—mostly books about Kansas history—but I do enjoy a good historical fiction or a Michael Creighton novel, too!

Tags: 19th century Kansas, A.D. Searl, About Us, Behind the Scenes, Careers in Libraries, Kansas History, Lynn Ward, Meet the Staff, Processing
Posted in Processing |
No Comments Yet »