In this week’s incomplete letter, Milo writes about “thirteen days on active service on some Front.” He mentions going through the “experience of shell fire and gas,” describing it as “great” and possibly masking the true horror and terror of the situation. 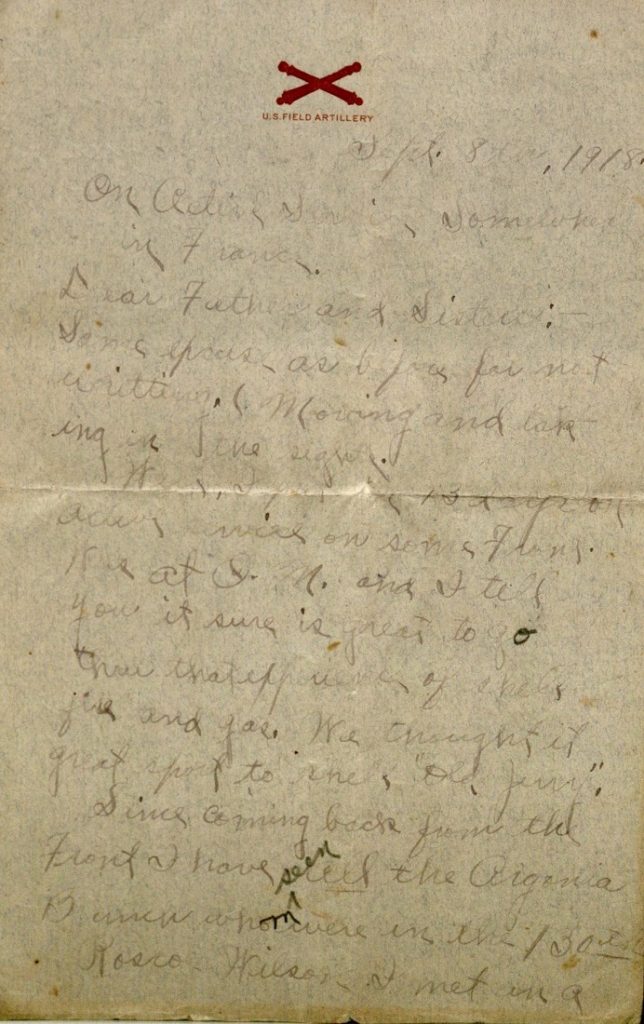 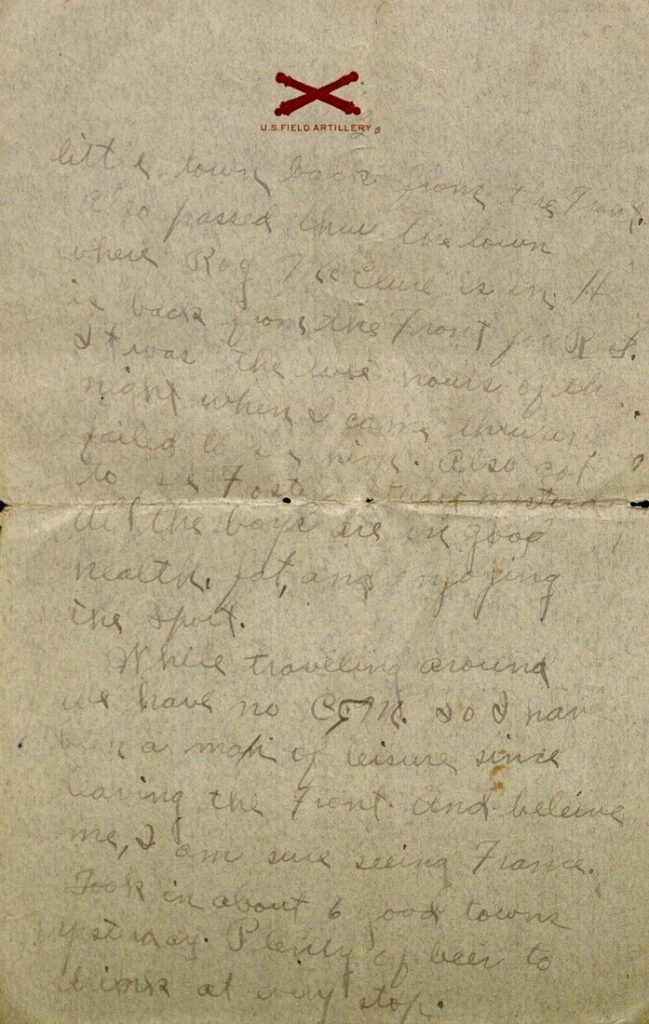 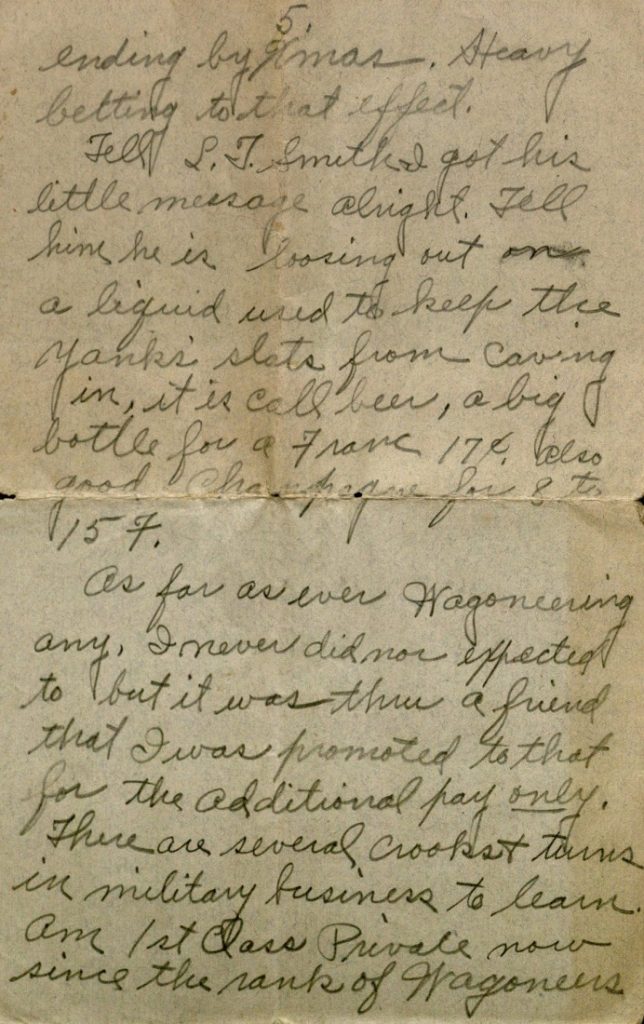 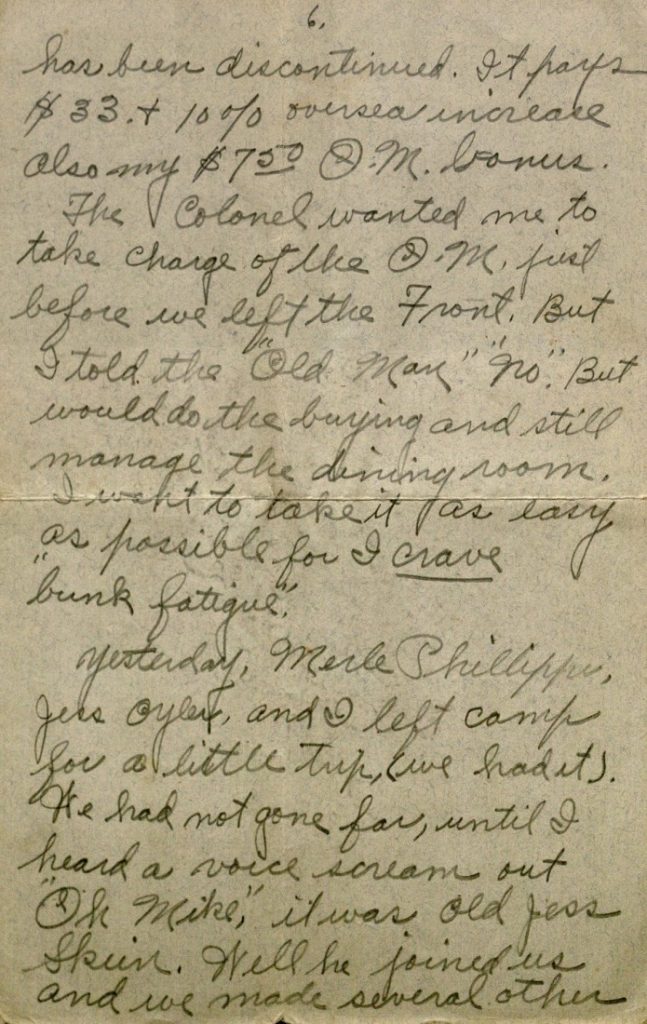 Same excuse as before for not writting. (Moving and taking in the sights.

Well, I [illegible] 13 days on active service on some Front. Was at O.M. and I tell you it sure is great to go thru that experience of shell fire and gas. We thought it great sport to shell “Old Jerry.” [Germans]

Also passed thru the town where Roy McClure (2) is in. He is back from the Front for Rest. It was the wee hours of the night when I came thru and failed to see him. Also got to see Foster Stuart (3) yesterday. All the boys are in good health, fat, and enjoying the sport.

While traveling around we have no O.M. So I have been a man of leisure since leaving the Front. And believe me, I am sure seeing France. Took in about 6 good towns yesterday. Plenty of beer to drink at every stop.

ending by Xmas. Heavy betting to that effect.

Tell L.T. Smith (4) I got his little message alright. Tell him he is loosing out on a liquid used to keep the Yanks’ slats from caving in, it is call beer, a big bottle for a Franc 17¢. Also good Champagne for 8 to 15 F.

As far as ever Wagoneering any, I never did nor expected to but it was thru a friend that I was promoted to that for the additional pay only. There are several crooks & turns in military business to learn. Am 1st Class Private now since the rank of Wagoneers has been discontinued. It pays $33. + 10% oversea increase. Also my $7.50 O.M. bonus.

The Colonel wanted me to take charge of the O.M. just before we left the Front. But I told the “Old Man” “No”. But would do the buying and still manage the dining room. I want to take it as easy as possible for I crave “bunk fatigue.”

Yesterday, Merle Phillippi (5), Jess Oyler (6), and I left camp for a little trip, (we had it). We had not gone far, until I heard a voice scream out “Oh Mike,” it was old Jess Skein (7). Well he joined us and we made several other

(1) According to his World War I draft registration card, Roscoe Wilson was born in Colorado on January 19, 1890. He was employed by the Atchison, Topeka and Santa Fe Railway, working as a clerk. During the war he served in Co. L, 139th Infantry Regiment.

(2) Milo mentioned Roy McClure in his letter of July 24, 1918. Biographical information about him can be found in that blog post.

(3) According to his World War I draft registration card, Foster Stewart (elsewhere spelled Stuart) was born in Wellington, Sumner County, Kansas, on December 27, 1888. When his father, John T. Stewart, died in 1905, the Wellington Daily News called him the “richest man in Kansas.” A strongly-worded condemnation in the newspaper in August 1917 argued that the Stewart family’s wealth and influence had protected Foster from punishment, despite running afoul of the law several times. During the war, Stewart served in Co. M, 139th Infantry.

(4) Lewis T. Smith was a postmaster in Argonia.

(5) Milo mentioned Merle Phillippi in his letter of August 11, 1918. Biographical information about him can be found in that blog post.

(6) According to his World War I draft registration card and other sources, Jesse Ralph Oyler was born in Gentryville, Gentry County, Missouri, on January 23, 1894. Previously a student at the Wichita Business College, Oyler was working as an auditor in Wichita in 1917. During the war he served in Battery F, 130th Field Artillery with Milo.

(7) According to his World War I draft registration card, Jesse Barlow Skean was born in Prairie City, Illinois, on January 19, 1887. Other sources indicate that Jesse spent his childhood in Illinois before his family relocated to Wichita around 1910. By 1917, he was farming in Argonia. During the war, Jesse and his brother Byron served in Co. C, 110th Field Signal Battalion. Their brother Russell served in Russia.

This entry was posted on Monday, September 3rd, 2018 at 8:00 am and is filed under Kansas Collection. You can skip to the end and leave a response. Pinging is currently not allowed.