In this week’s letter, Milo reports on changes to his rank and pay, writing that he “received an increase of pay from Mess, but our Battery has no use for Wagoneers at present and we Wagoneers were reduced to Privates.” Milo also informs his family that he had “my first cigarette to smoke since being in the service and French Wines I have not drank since July 4th, two habits which are very injurious to good health over here.” 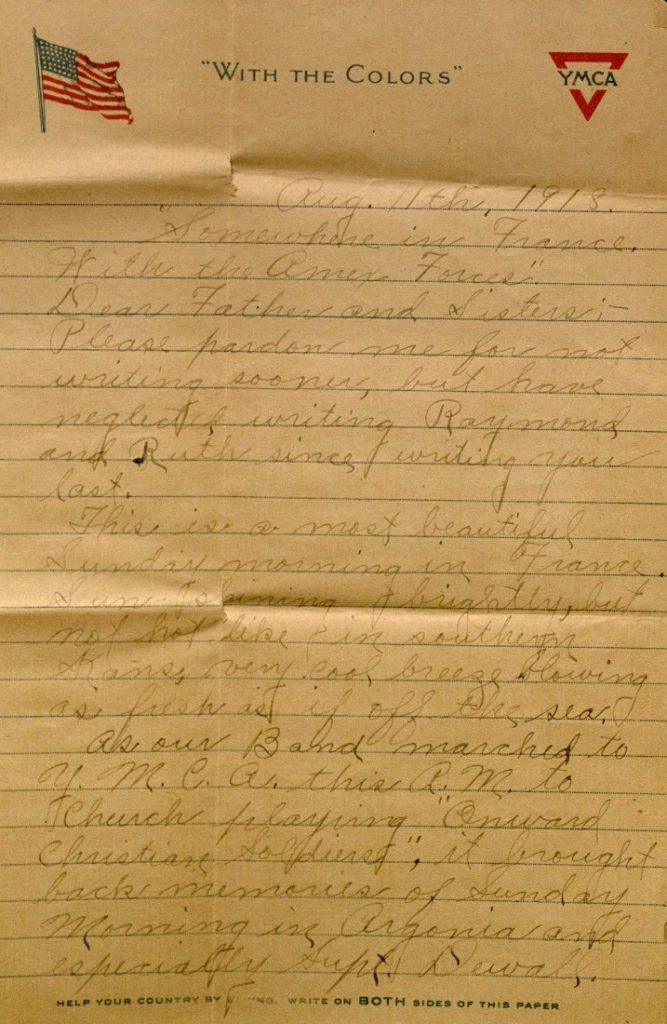 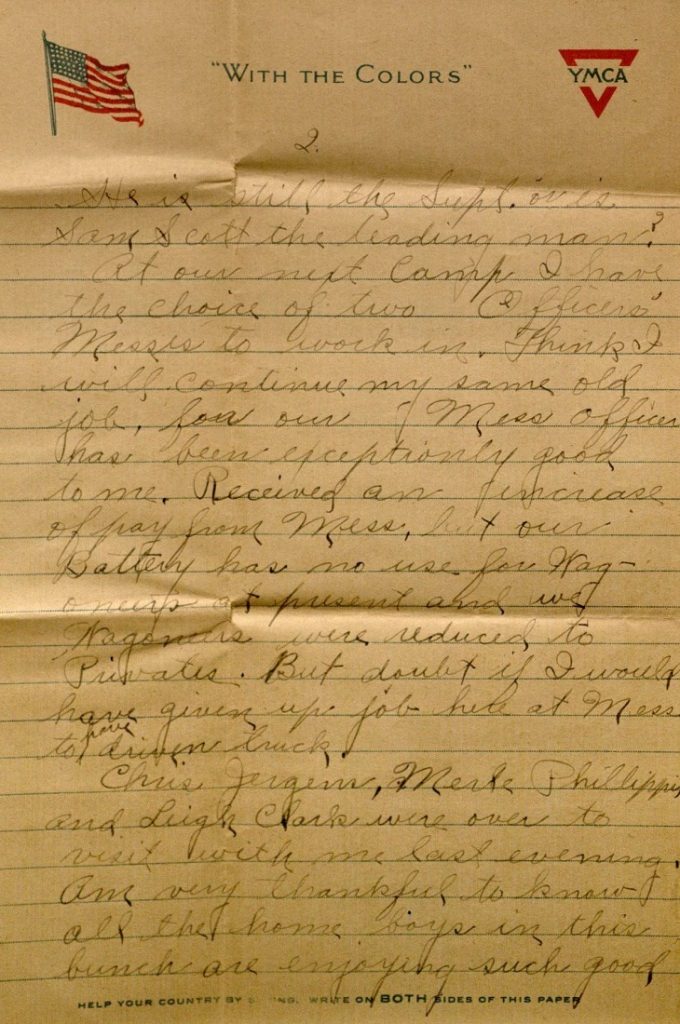 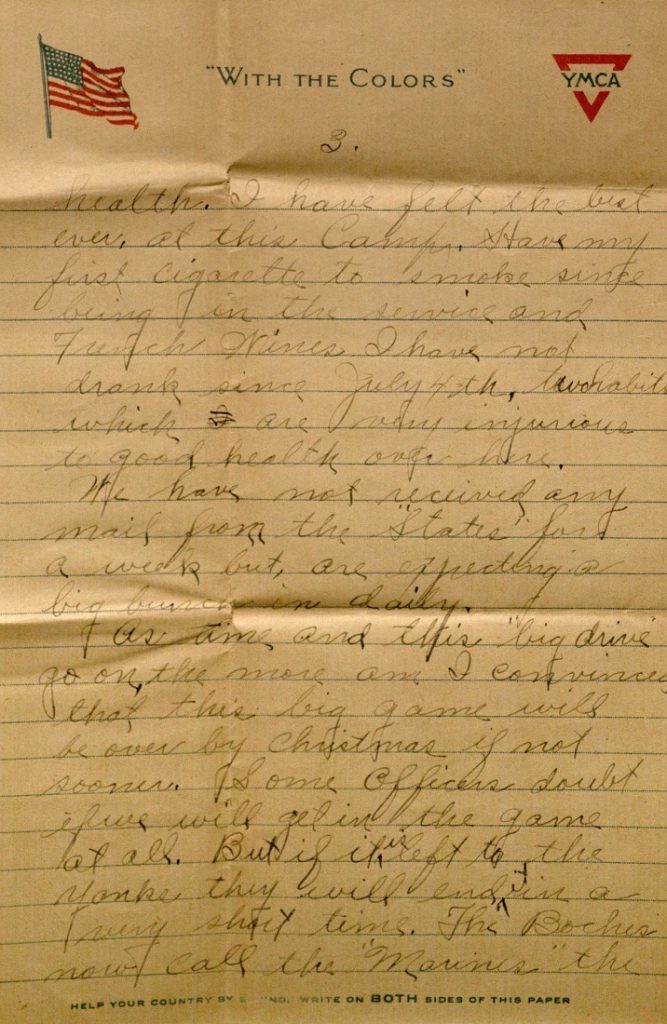 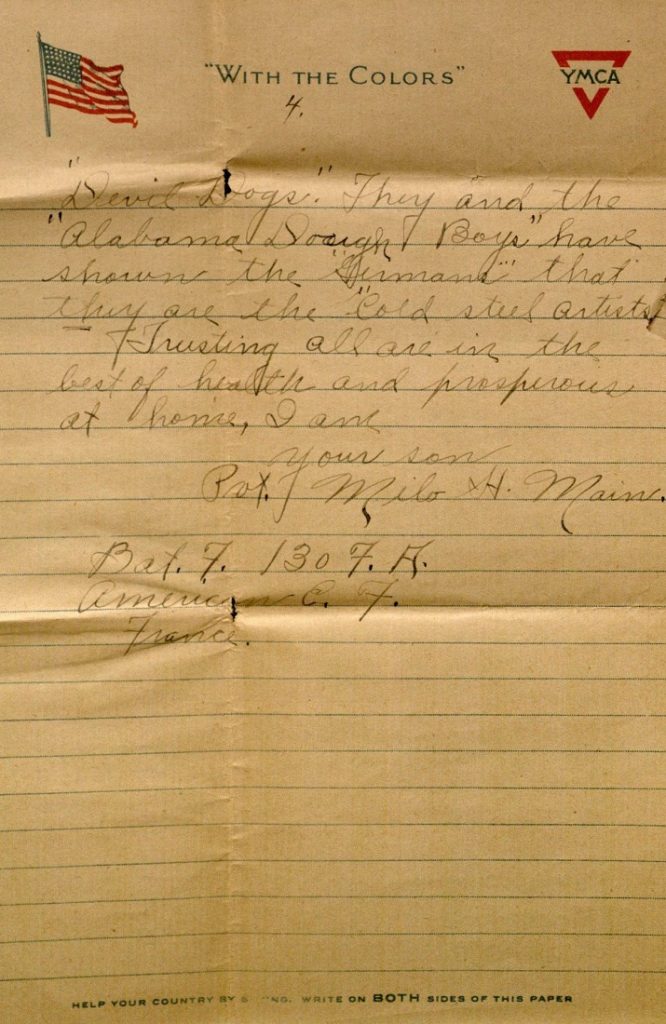 Please pardon me for not writing sooner, but have neglected writing Raymond (1) and Ruth since writing you last.

This is a most beautiful Sunday morning in France. Sun – shining brightly, but not hot like in southern Kans, very cool breeze blowing as fresh as if off the sea.

As our Band marched to Y.M.C.A. this A.M. to Church playing “Onward Christian Soldiers,” it brought back memories of Sunday Morning in Argonia and especially Supt. Dewall. He is still the Supt. or is Sam Scott the leading man?

At our next Camp I have the choice of two Officers’ Messes to work in. Think I will continue my same old job, for our Mess officer has been exceptionly good to me. Received an increase of pay from Mess, but our Battery has no use for Wagoneers at present and we Wagoneers were reduced to Privates. But doubt if I would have given up job here at Mess to have driven truck.

Chris Jergem (2), Merle Phillippi (3), and Leigh Clark (4) were over to visit with me last evening. Am very thankful to know all the home boys in this bunch are enjoying such good health. I have felt the best ever, at this Camp. Have my first cigarette to smoke since being in the service and French Wines I have not drank since July 4th, two habits which are very injurious to good health over here.

We have not received any mail from the “States” for a week but, are expecting a big bunch in daily.

As time and this “big drive” go on, the more am I convinced that this big game will be over by Christmas if not sooner. Some Officers doubt if we will get in the game at all. But if it is left to the Yanks they will end it in a very short time. The Boches now call the “Marines” the “Devil Dogs.” They and the “Alabama Dough Boys” have shown the “Germans” that they are the “Cold steel artists.”

Trusting all are in the best of health and prosperous at home, I am

(1) Possibly Raymond Flory, mentioned in several of Milo’s previous letters. Biographical information about him can be found with Milo’s letter of June 2.

(2) According to his World War I draft registration card, Chris Jurgens was born in Iowa on December 1, 1894. (Other sources state he was born in 1893.) He gave his home address as Argonia but stated he was farming in nearby Harper County, Kansas. According to the 1910 federal census, Chris’s parents were both born in Germany and immigrated to the United States around 1890-1892. During World War I, Chris served as a wagoner in Battery A, 130th Field Artillery. Like Milo, he sailed for Europe in May 1918 on board the Ceramic.

(3) According to his World War I draft registration card, Murrell Lewis Phillippi was born in Argonia in January 1895. (Elsewhere his birth date is listed as January 31, 1896.) In 1917 he was working as a waiter at a cafe. During the war he served with Milo as a private in Battery F, 130th Field Artillery. References in some of Milo’s letters suggest that Murrell was Jewish.

(4) Milo previously mentioned Leigh Clark in his letter of July 24th. Biographical information about him can be found in that blog post.

This entry was posted on Monday, August 6th, 2018 at 11:03 am and is filed under Kansas Collection. You can skip to the end and leave a response. Pinging is currently not allowed.