In this week’s letters, Milo summarizes his journey to England and provides some observations about the country, especially how he perceived it to be different than the United States. “Many things of interest of our voyage and this country I would like to write about,” he says, “but owing to the censor will have to wait until I return to tell you.” 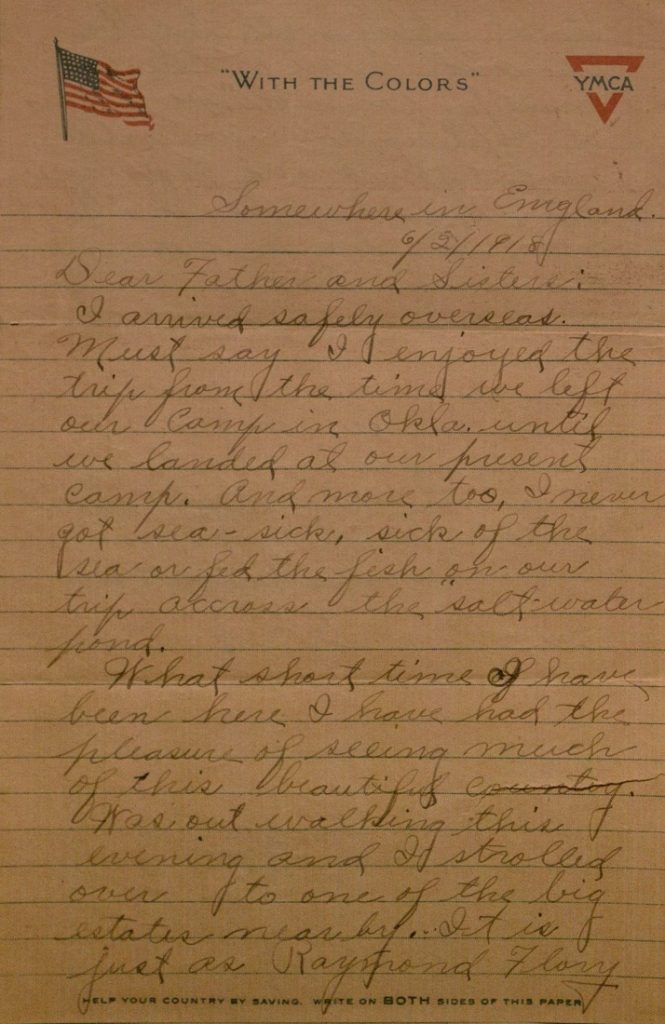 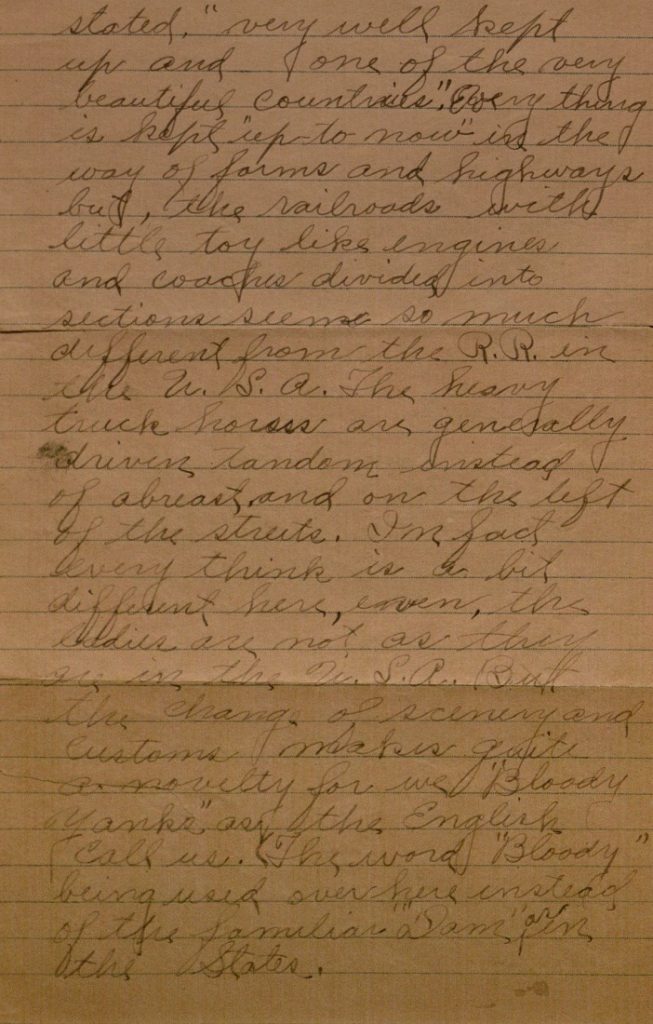 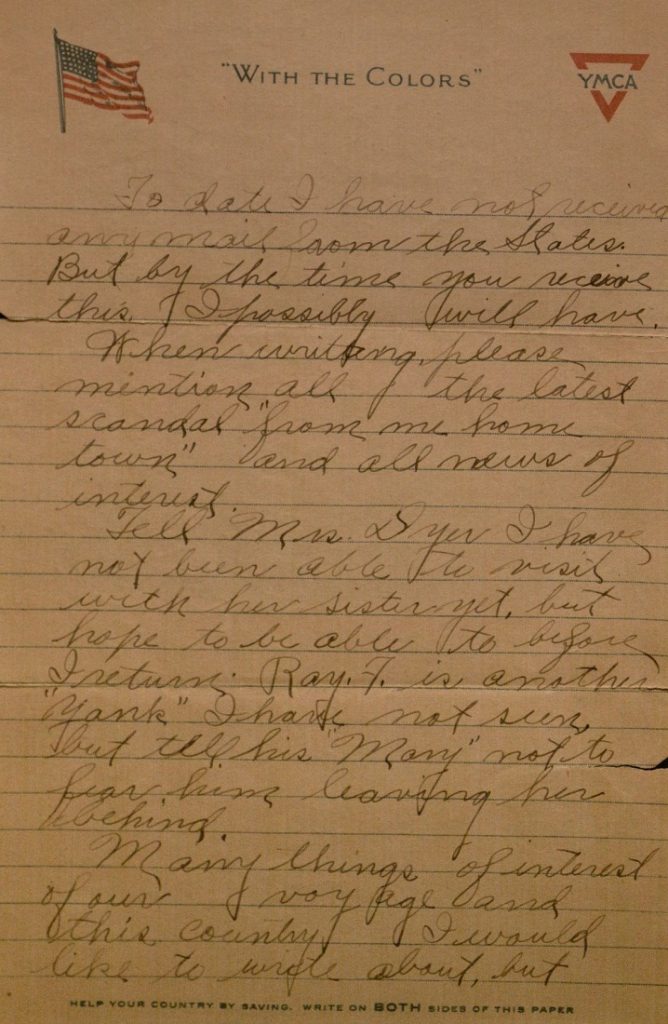 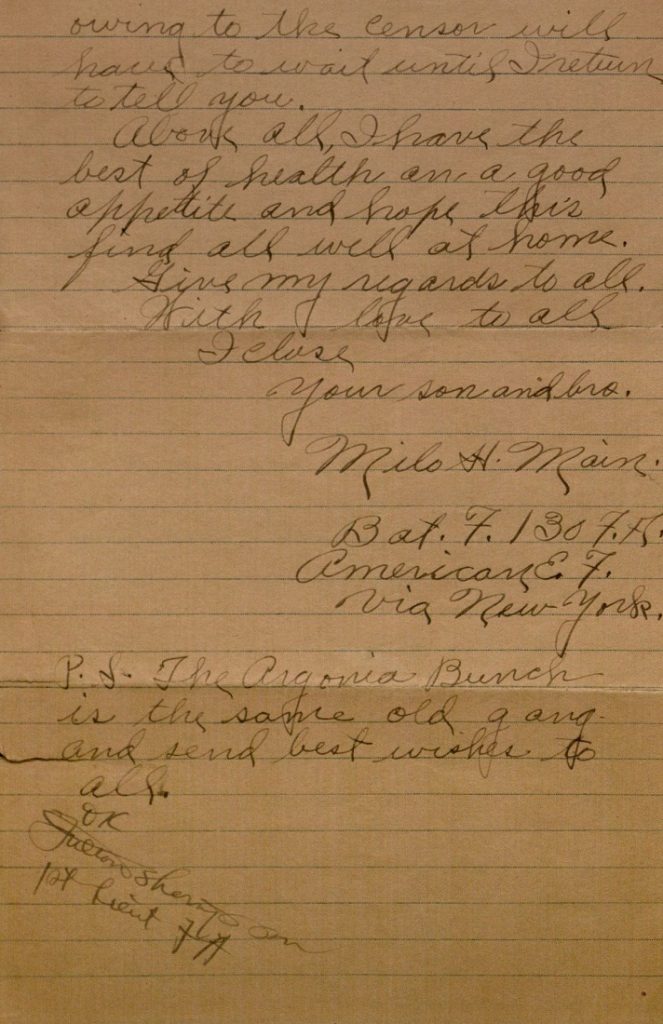 I arrived safely overseas. Must say I enjoyed the trip from the time we left our Camp in Okla. until we landed at our present camp. And more too, I never got sea-sick, sick of the sea or fed the fish on our trip across the salt-water pond.

What short time I have been here I have had the pleasure of seeing much of this beautiful country. Was out walking this evening and I strolled over to one of the big estates near by. It is just as Raymond Flory* stated, “very well kept up and one of the very beautiful countries.” Every thing is kept “up-to-now” in the way of farms and highways but, the railroads with little toy like engines and coaches divided into sections seem so much different from the R.R. in the U.S.A. The heavy truck horses are generally driven tandom instead of abreast and on the left of the streets. In fact every think is a bit different here, even, the ladies are not as they are in the U.S.A. But the change of scenery and customs makes quite a novelty for we “Bloody Yanks” as the English call us. (The word “Bloody” being used over here instead of the familiar “Dam” as in the States.

To date I have not received any mail from the States. But by the time you receive this, I possibly will have.

When writing, please mention all the latest scandal “from me home town” and all news of interest.

Tell Mrs. Dyer I have not been able to visit with her sister yet, but hope to be able to before I return. Ray F. [probably Raymond Flory] is another “Yank” I have not seen, but tell his “Mary” not to fear him leaving her behind.

Many things of interest of our voyage and this country I would like to write about, but owing to the censor will have to wait until I return to tell you.

Above all, I have the best of health an a good appetite and hope this find all well at home.

Give my regards to all.

With love to all
I close
Your son and bro.

P. S. The Argonia Bunch is the same old gang and send best wishes to all.

*Raymond Henry Flory and Milo were likely childhood neighbors and may have been friends. The two had very similar histories: Raymond was born in Iowa on February 28, 1892. By 1900 his family was living in Sumner County, Kansas. Raymond’s mother died in 1906, and by 1910 he was living with his aunt and uncle in Wichita. Raymond’s father and brother, both named Benjamin, continued to live in Argonia, and area newspapers reported that he periodically visited them. Raymond enlisted in December 1917, reporting that he was living in Wichita and working as a truckman for the Missouri Pacific Railroad. He served in the 137th Aero Squadron, Aviation Section, Signal Corps – leaving New York on March 6, 1918, presumably bound for England.

This entry was posted on Monday, June 4th, 2018 at 11:04 am and is filed under Kansas Collection. You can skip to the end and leave a response. Pinging is currently not allowed.