In this week’s letters, Milo speculates about the potential end of the war. Despite being on the front, Milo also tells his family “[I] am also satisfied with my present position. For my duties are few, boo-coo of good eats, and cozy little hut to sleep in, as well as, a big fire-place and plush settee to read and write by.” 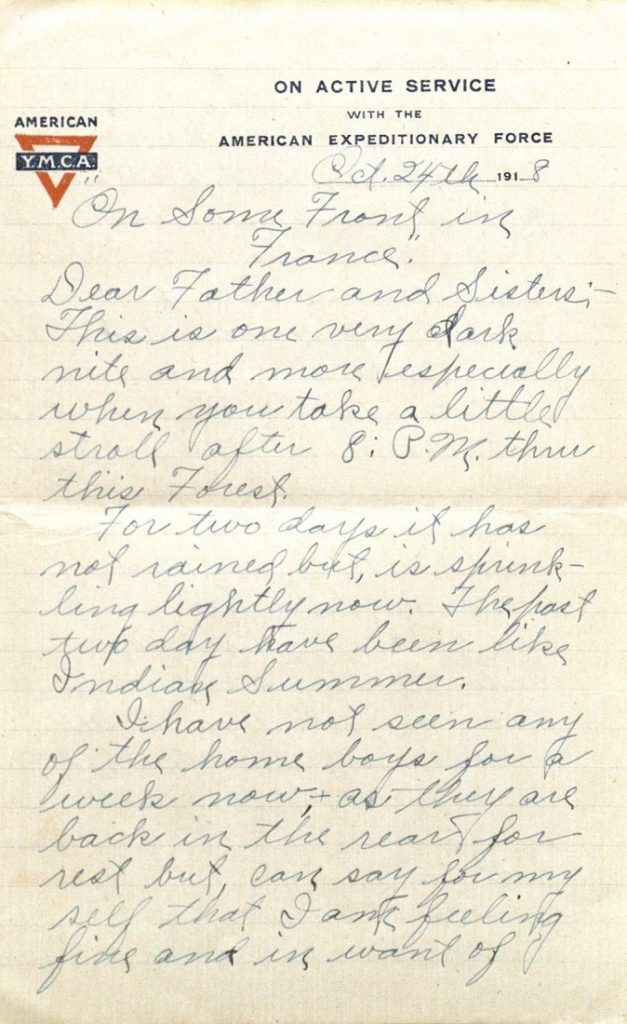 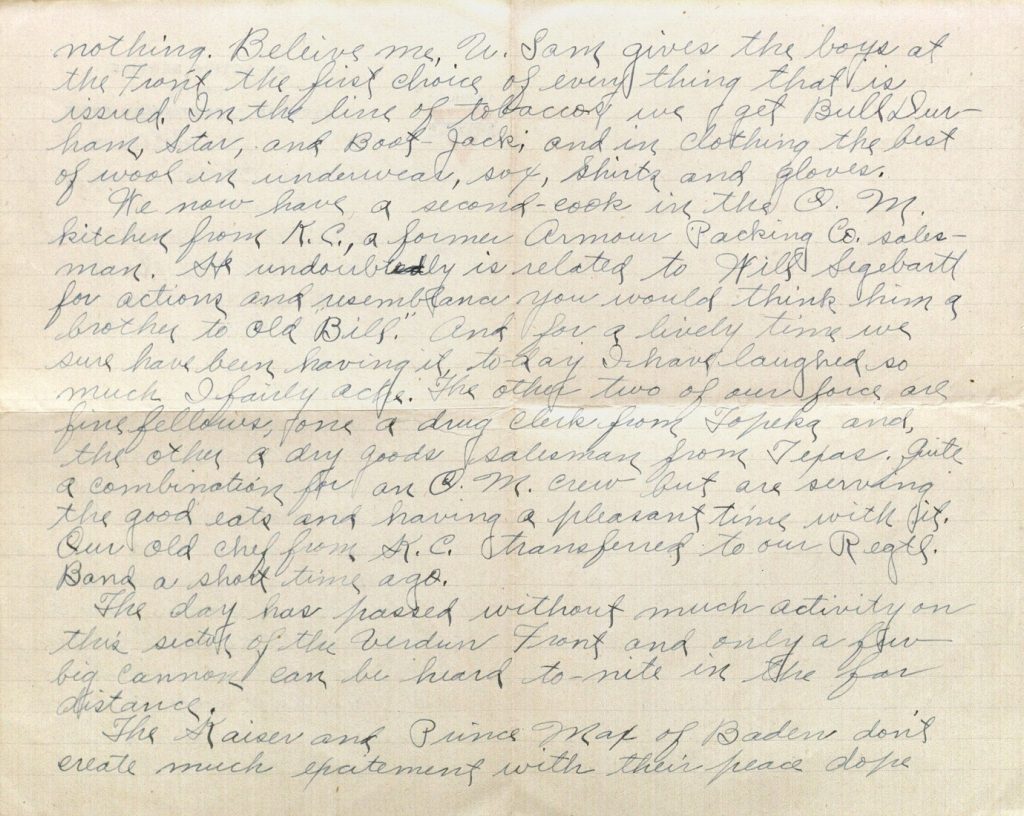 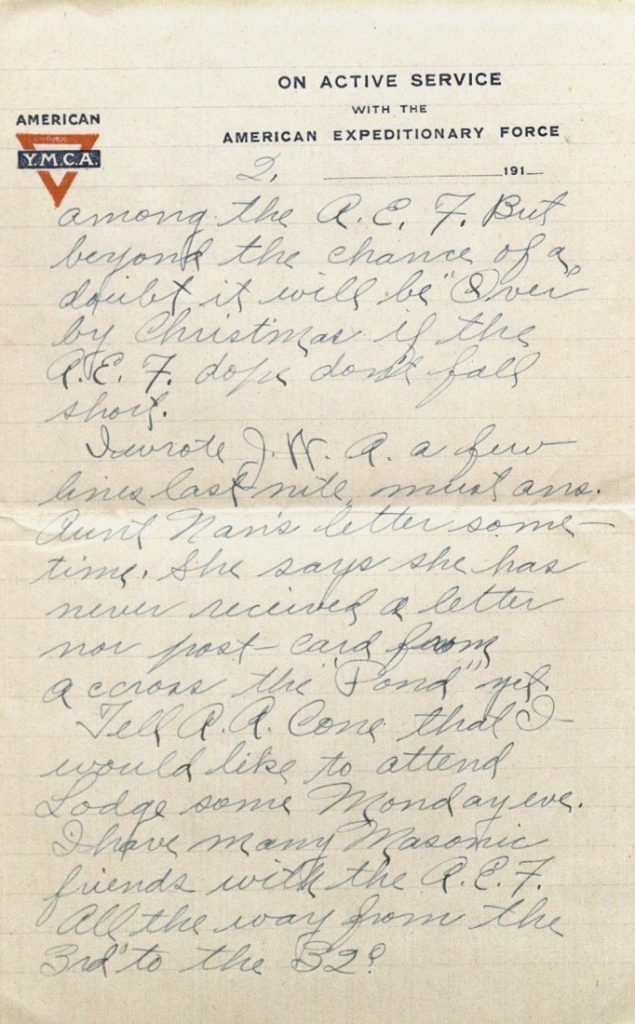 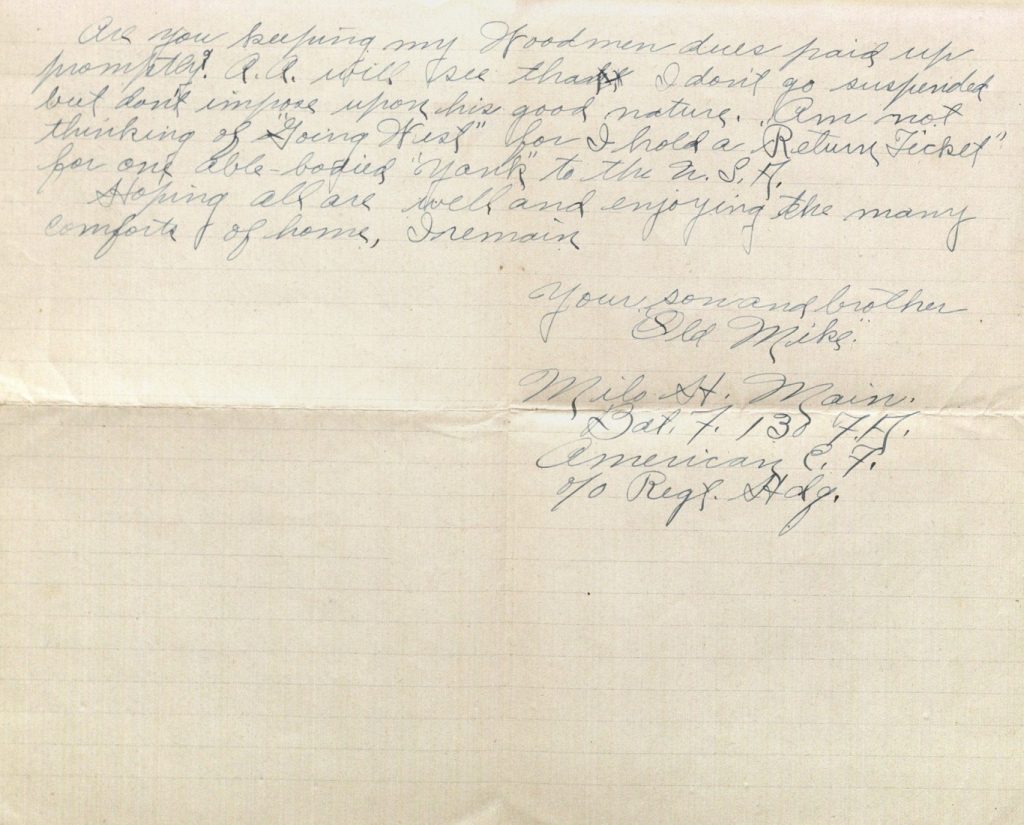 This is one very dark nite and more especially when you take a little stroll after 8: P.M. thru this Forest.

For two days it has not rained but, is sprinkling lightly now. The past two day have been like Indian Summer.

I have not seen any of the home boys for a week now – as they are back in the rear for rest but, can say for my self that I am feeling fine and in want of nothing. Believe me U. Sam gives the boys at the Front the first choice of every thing that is issued. In the line of tobaccos we get Bull Durham, Star, and Boot-Jack; and in clothing the best of wool in underwear, sox, shirts and gloves.

We now have a second-cook in the O.M. kitchen from K.C., a former Armour Packing Co. salesman. He undoubtedly is related to Will Segebartt (1) for actions and resemblance you would think him a brother to old “Bill.” And for a lively time we sure have been having it, to-day I have laughed so much I fairly ache. The other two of our force are fine fellows, one a drug clerk from Topeka and, the other a dry goods salesman from Texas. Quite a combination for an O.M. crew but are serving the good eats and having a pleasant time with it. Our old chef from K.C. transferred to our Regtl. Band [Regimental Band] a short time ago.

The day has passed without much activity on this section of the Verdun Front and only a few big cannon can be heard to-nite in the far distance.

The Kaiser and Prince Max of Baden don’t create much excitement with their peace dope [inside information] among the A.E.F. But beyond the chance of a doubt it will be “Over” by Christmas if the A.E.F dope don’t fall short.

I wrote J.W.A. (2) a few lines last nite, must ans. Aunt Nan’s (3) letter sometime. She says she has never received a letter nor post-card from a cross the “Pond” yet.

Tell A.A. Cone (4) that I would like to attend Lodge some Monday eve. I have many Masonic friends with the A.E.F. all the way from the 3rd° to the 32°!

Are you keeping my Woodmen dues paid up promptly? A.A. will see that I don’t go suspended but don’t impose upon his good nature. Am not thinking of “Going West” for I hold a “Return Ticket” for one able-bodied “Yank” to the U.S.A.

Hoping all are well and enjoying the many comforts of home, I remain

(1) According to his World War I draft registration card, William Jess Segebartt was born in Argonia on December 31, 1891. In 1917 he was working as a farmer in Sumner County.

(2) Probably J. W. Achelpohl, a storeowner in Argonia who was Milo’s former employer when he worked as a clerk. He has been mentioned in some of Milo’s previous letters.

(3) Preliminary research indicates this was Nancy Main, a younger sister of Milo’s father William. Nancy Main was born in 1869 and lived her entire life in Pike County, Illinois. The 1910 census lists her in the same household as Milo’s younger sister Fern.

(4) Possibly Ashley A. Cone. Cone was born in Ohio in 1870, although his family relocated to Sumner County by the time he was ten years old. Cone worked as a mail carrier.

Dear Father and Sisters:- I put out my “Sunny Monday” washing of 18 pieces this morning and have the afternoon and evening to write. I lost my set of sad [heavy] irons after we came down from the Alsace Front, will purchase a French iron when I go to the city again.

Wrote Aunt Nan and Miss Jo’ this week. Sorry to think I am so lazy about writting.

On this paticular sector of the Verdun Front it has been exceptionly quiet up to an hour ago. At that time “Jerry” [Germans] sent over some “iron rations” to our Battery- positions. “Believe Old Mike” he will regret it before the sun rises again.

Am certainly well pleased with our present O.M. position and accommodations, but the way the Yanks are advancing on our right and left we will be obliged to move up before many moons.

Am also satisfied with my present position. For my duties are few, boo-coo of good eats, and cozy little hut to sleep in, as well as, a big fire-place and plush settee to read and write by.

On the 25th inst. I was called into Regtl. Hdq. [Regimental Headquarters] and presented with the first “Overseas” furlough to be given in the 130 F.A. I refused to sign it at that time, thinking possibly there might be a big show staged for “Jerry” by the Yanks. Understand, that I have again been recommended for furlough soon. Possibly I will go this time for it is a break of 10 days with board, room, and transportation charges paid to a famous French resort where the many American Tourists spent their summers prior to 1914. No kidding, there are a bunch of officers here that sure are loyal to me, in fact, they treat me more like a son, rather than a solider.

I came up here on the 10/17 and have not seen any of the Argonia Bunch since. Am at liberty to go back to rear achelon where they are stationed but like it so well here I have never gone down for any thing. Always send by the P.O.’s chauffer for any little thing I need. He also carries my mail both ways.

Well- I guess I am a big expense to Uncle Sam and some of his officers. You should have seen my breakfast this morning. Angel-food (white bread) toast, creamery butter, Jap rice with “Monarch” brand preserved strawberries and pure cream, crisp and brown bacon, and good black coffee. In fact I’m a mean feeder at all times. We now have enough canned goods, fresh vegetables and fresh, frozen U.S. beef on hand to start a B.D. Shore store.

Your son and brother
“Mike.”

As I failed to mail my letter this morning I will add a bit more to it.

Received the word at our Radio Station late last night that Austria-Hungary is crying to accept Pres. Wilson’s peace terms. Also rumored this evening that “Kaiser Bill” and his gang are thinking seriously of quitting their post. U.S. now means more than United States, “Unconditional Surrender.”

A Masonic friend with our Red Cross detachment and I walked down to our “rear achelon,” which has moved up with in 7 kilometers of us. My mission was to get more new clothing as you might know. Sure have some fine light weight woolen underwear, had drawn some extra heavy wear, but the weather here now is far warmer than in southern Kans. at this time. While down below, I met Warlow (1) and Aurthur Knox (2), all the boys are quite well and are located in a beautiful little camp. Was informed that my mail had been sent to Bat 7’s Hdq. at the Front. It will be forwarded here in the morning most likely.

Our Regtl. Commander sent his touring car to Nancy (a young Paris) this morning for eats and drinks. The car arrived a few minutes ago. It was ladden with any thing from wine to a fatted live goose. Also a basket of eggs, they are valued at more than a $1.00 per dozen now. The R.C. [Regimental Commander] stated at dinner to-nite that, we were feeding to much. Think he is right for some of Bat. F. Boys whom had not seen me for two weeks said I was getting fatter, so fat that I resembled a fattened porker, at that they envied me of my eats. My motto has never changed, Eat, drink, and be merry to-day, for to-morrow Jerry may have your number on one of his shells.

I am subscribing for the “Stars and Stripes,” and “Overseas” weekly paper edited by the Yanks for the Yanks which I will have sent to you. Every solider of this, the 35th division, has pledged to give at least 1 franc (about 20¢), to be distributed among the “poor” of France, as his Christmas celebration.

One sight on my way back to the Front this evening was a Yank lying in the breech of a huge gun polishing the rifles there in. Her name is “Reinne Elizabeth” and her sister gun is named “Joan of Arch.” They were firing at noon. The concussion was so great that you could see the side of our kitchen wall push in from the pressure.

Am enclosing the metal top from a cognac bottle. It is a French liquor used very much. So strong that it will eat the varnish off of the table. cannot say as to the effect on ones stomach, but has a powerful winding ability on ones head. Can truthfully say, I am drinking only beer and champagne.

I close to-nite feeling fine after my little hike this afternoon. Thinking such a walk would do me good daily.

(1) Alvin Lee Warlow, who Milo has mentioned previously. Biographical information about him can be found with Milo’s letter of October 9th.

(2) Milo has mentioned Arthur Knox previously. Biographical information about him can be found in Milo’s letter of July 7th.

This entry was posted on Monday, October 22nd, 2018 at 8:44 am and is filed under Kansas Collection. You can skip to the end and leave a response. Pinging is currently not allowed.