In this week’s letter, Milo describes French women and expresses his desire to visit Spain before leaving Europe and returning home to Kansas. 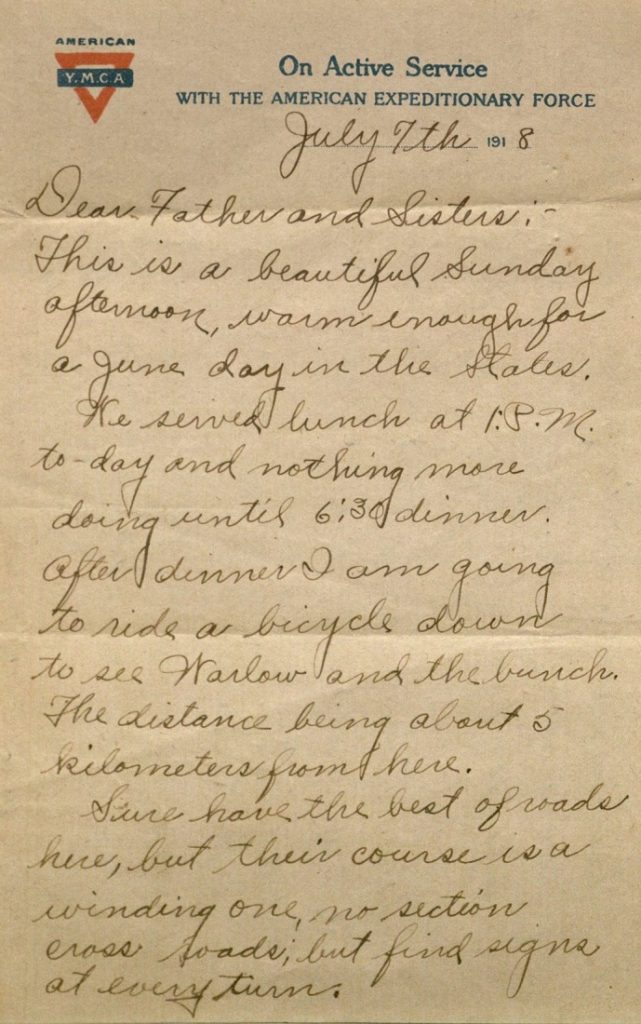 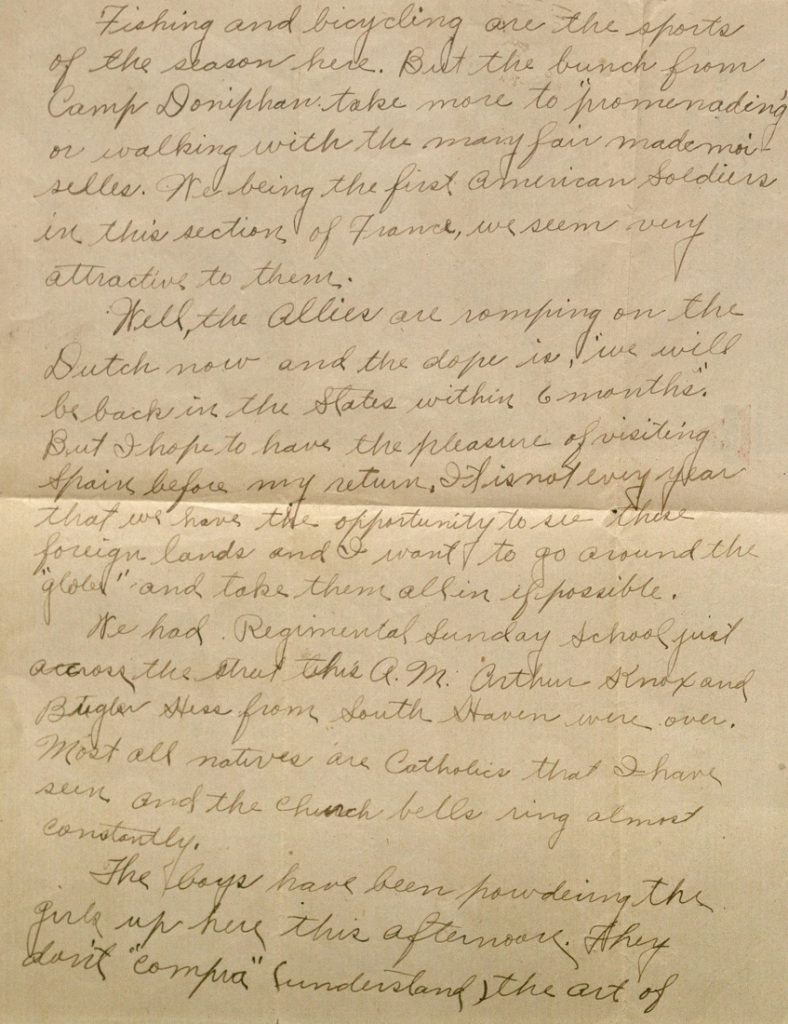 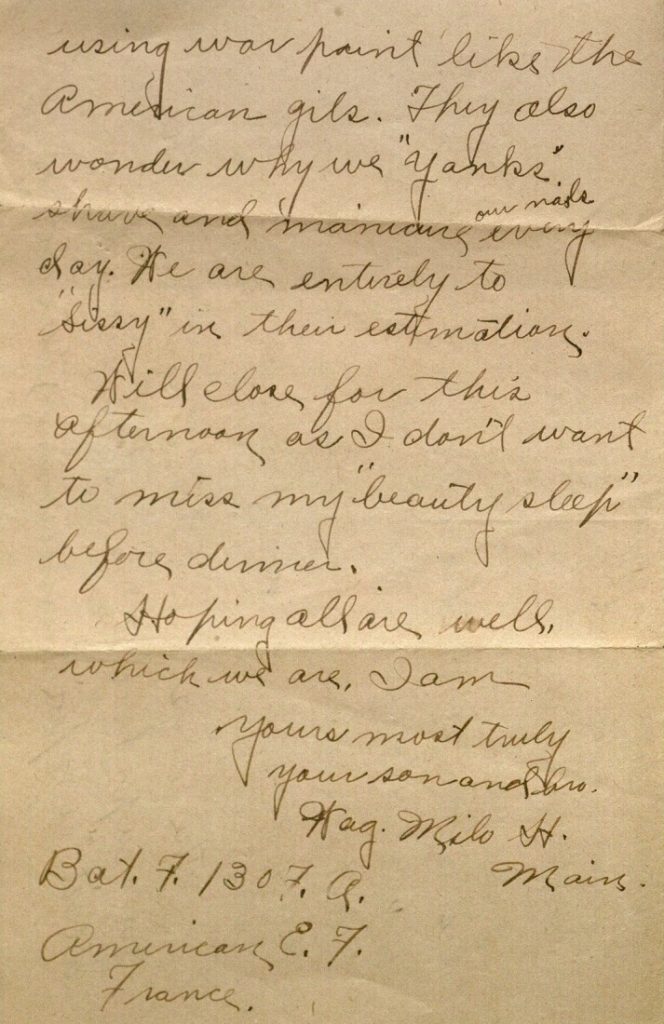 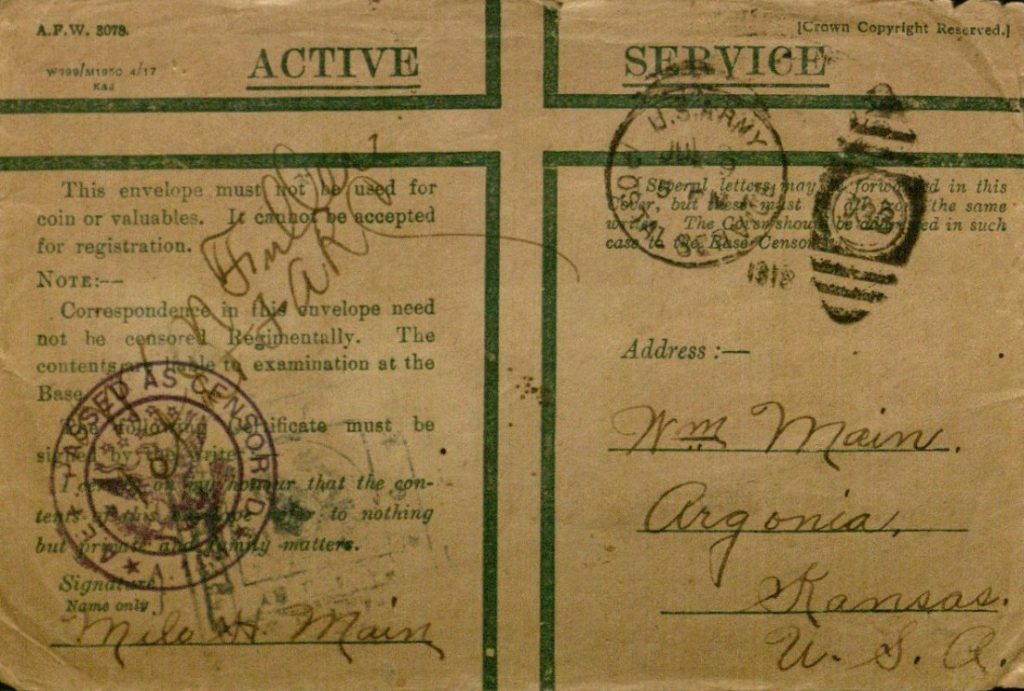 This is a beautiful Sunday afternoon, warm enough for a June day in the States.

We served lunch at 1:P.M. to-day and nothing more doing until 6:30 dinner. After dinner I am going to ride a bicycle down to see Warlow and the bunch. The distance being about 5 kilometers from here.

Sure have the best of roads here, but their course is a winding one, no section cross roads; but find signs at every turn.

Fishing and bicycling are the sports of the season here. But the bunch from Camp Doniphan take more to “promenading” or walking with the many fair mademoiselles. We being the first American Soldiers in this section of France, we seem very attractive to them.

Well, the Allies are romping on the Dutch [Germans] now and the dope [inside information] is, “we will be back in the States within 6 months.” But I hope to have the pleasure of visiting Spain before my return. It is not every year that we have the opportunity to see these foreign lands and I want to go around the “globe” and take them all in if possible.

We had Regimental Sunday School just across the street this A.M. Arthur Knox and Bugler Hess* from South Haven [Sumner County, Kansas] were over. Most all natives are Catholics that I have seen and the church bells ring almost constantly.

The boys have been powdering the girls up here this afternoon. They don’t “compra” (understand) the art of using war paint [makeup] like the American girls. They also wonder why we “Yanks” shave and manicure our nails every day. We are entirely to “Sissy” in their estimation.

Will close for this afternoon as I don’t want to miss my “beauty sleep” before dinner.

Hoping all are well, which we are. I am

yours most truly
your son and bro.
Wag. Milo H. Main

This entry was posted on Monday, July 2nd, 2018 at 8:00 am and is filed under Kansas Collection. You can skip to the end and leave a response. Pinging is currently not allowed.