In the letters from these two weeks, we catch up with Milo after not hearing from him during the previous month. (He says that “the last letter I wrote you was dated Sept. 28th,” but that letter is not in Spencer Research Library’s collection.) Milo describes being on the “Argonne Front near Verdun” for ten days: “We sure put over some barrage on the night the big drive started. We, the Yanks regained in 27 hours what the French and British had been fighting for for four years.” Back behind the lines, Milo writes that “all are glad to get where they can’t hear the huge cannon and don’t have to wear steel helmets and carry gas masks.”

October, 6th, 1918.
Somewhere in France but, soon Everywhere in Germany.

This Sunday afternoon I received nine letters from you, dated: Sept. 2nd, 3rd, 4th, 5th, 6th, 10th, 11th, and two the 9th. Also one from Fern [Milo’s youngest sister, living in Illinois] and Ruth. I certainly appreciate hearing from you so often and keeping me in touch the local news. Sorry tho’, that I don’t write to you oftener. The last letter I wrote you was dated Sept. 28th on the “Front.”

Last night we arrived in a little French village, Hargeville, and started our O.M. in the Mayor’s home. Some place too, it is built like most French buildings, of huge stone with tile roof but, it is about 150 ft. square complete with home, horse, cow, sheep and poultry apartments under the one roof. And too, a small threshing machine driven by a tread mill.

I was up on the Argonne Front near Verdun ten days. Beleive me we sure put over some barage on the night the big drive started. We, the Yanks regained in 27 hours what the French and British had been fighting for for four years. One of the Enemy’s strong points, a hill, with an arsenal and a city 7. stories deep, we dug out a cut wide enough for 12 railroads and many feet deep. The German’s thought it impossible for it to ever be taken for it was fixed up modern. I visited the under ground city personally and found it equipped with electric lighting systems, water works and railroad leading up from the rear. They left in such haste that their morning meal was left on their tables uneaten and liquor half drank. American can milk and jams were found on their tables like it was later discovered in a German canteen we captured. The only souvenir that I am carrying at present is a blouse button off a Jerry’s [German’s] blouse. He is now located in a permanent rest camp. Many of the boys are loaded to the hubs with German helmets and other articles of the Dutch. After we advanced, the cook and I were ordered to stay behind with our Mess Equipment but, I stole up with in sight of the fleeing enemy more than once.

Glad to tell, all the Argonia bunch in the Artillery came out with out a wound. No wonder tho, for “Jack” Gen. Pershing was in command.

Please send me a copy of the chaplain’s letter, as our 2nd class mail matter has been delayed for many weeks.

Shows, yes, when in or near the larger cities we visit them quite often.

There are some beautiful French women here, more tho in the largest cities but, as to many of the Yanks marrying them, I have my first one to see that ever had a thought about it.

Perfectly alright with me if you give the Pike Bros. all my old clothing.

I will not need my leather vest, heavy underwear, or any candies as Uncle Sam looks after that for us “Overhere” much different than in the States. We will be issued heavy wool under wear in a few days. Had a leather vest, but, let a friend have it, will get another later on, and candies, I have been sick this afternoon from eating so much cholates [chocolates] and smoking Roi-Tans [cigars].

The boys at O.M. to-nite have been singing so, one could hardly think. All are glad to get where they can’t hear the huge cannon and don’t have to wear steel helmets and carry gas masks. Think we will be motorized now, if so, it will be months before we get in the lines again.

Please send my Liberty Bond to the Guthrie Consistory in Care of Frank H. Den, Sec. at Guthrie, Okla.

Ruth sent me some kodak pictures of her and her chums eating water melons, sure made my mouth water (for the melon).

Have talked to all the “Argonia Bunch” since leaving the Front and can vouch for the good health of them all. We will do our ____est to be home soon.

(1) Rollie Hillard Holt was born in Sumner County on May 12, 1901. Most records indicate that he served for roughly seven months in Co. A, 110th Military Police in the Kansas National Guard at Camp Doniphan. He was honorably discharged from the army in December 1917/January 1918 on account of disabilities. Holt was the focus of several stories in local newspapers during the spring and summer of 1918; on September 9, The Wichita Beacon seems to have reported on the operation referenced by Milo.

Rollie Holt, the seventeen-year-old boy who was recently sent by Judge Sargent to the federal penitentiary charged with being criminally insane, has been brought back to Wichita by Sheriff Sarver and was this morning released from custody under bond, pronounced cured, according to his attorney. Holt was arraigned in the District Court six weeks ago for setting fire to several buildings. He entered a plea of guilty in Judge Sargent’s court at his first trial, but the judge refused it, entered him in the case as not guilty, and found him criminally insane. After being in Lansing prison for several days, an operation was performed upon Holt and he is now pronounced cured from his mental disability. 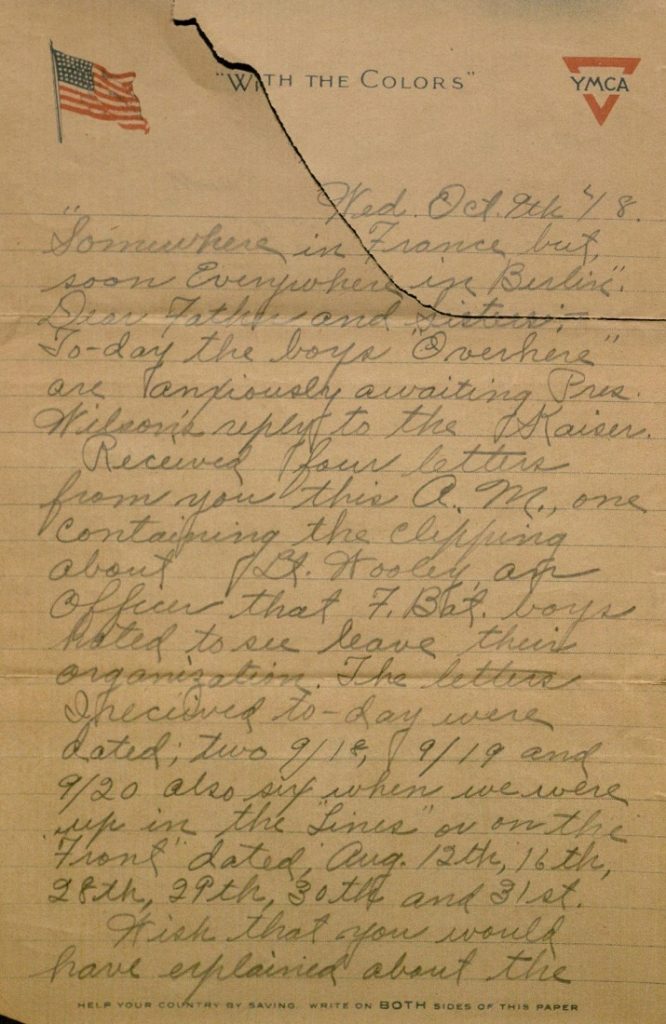 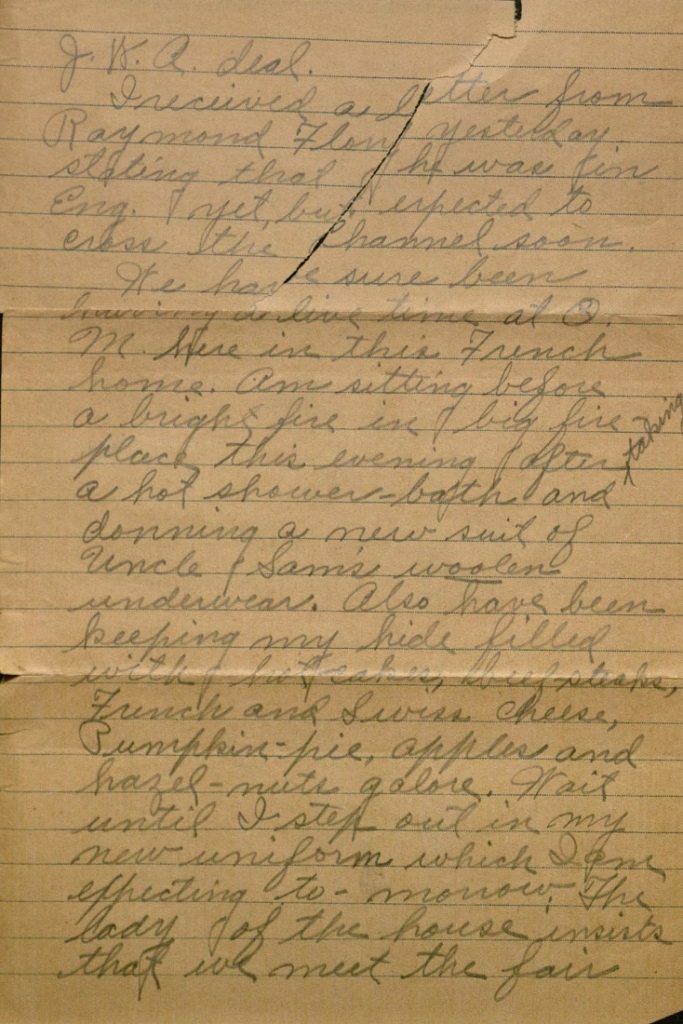 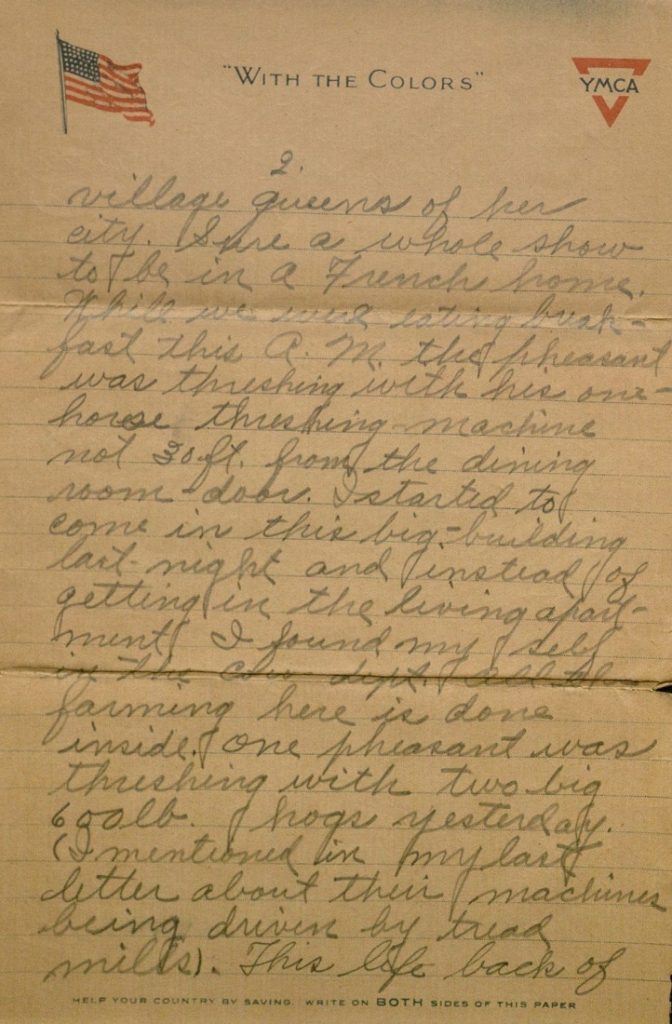 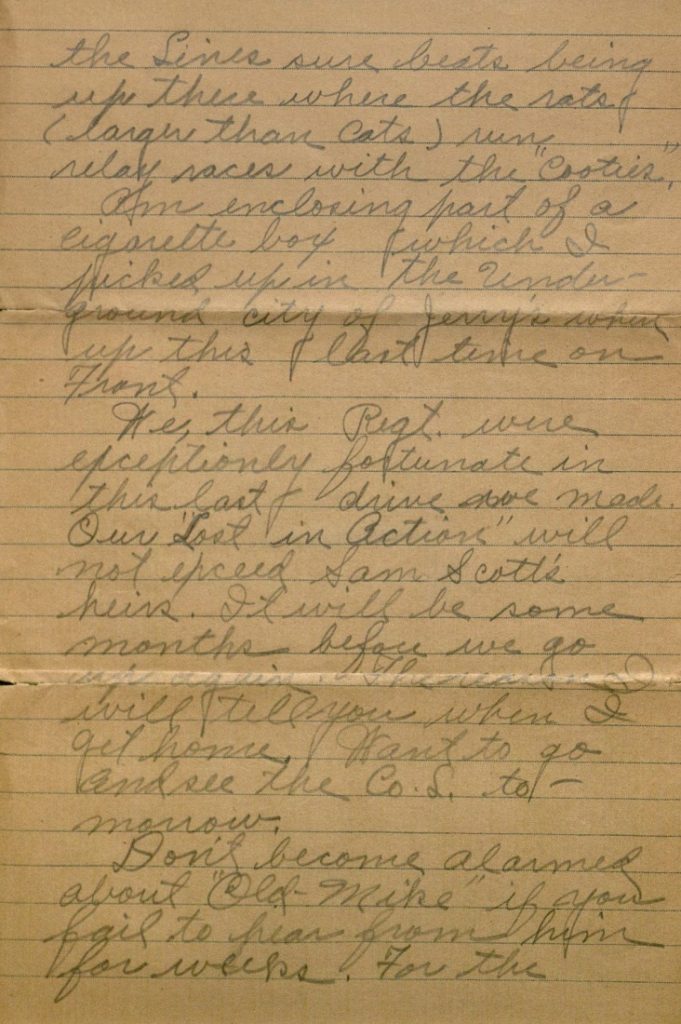 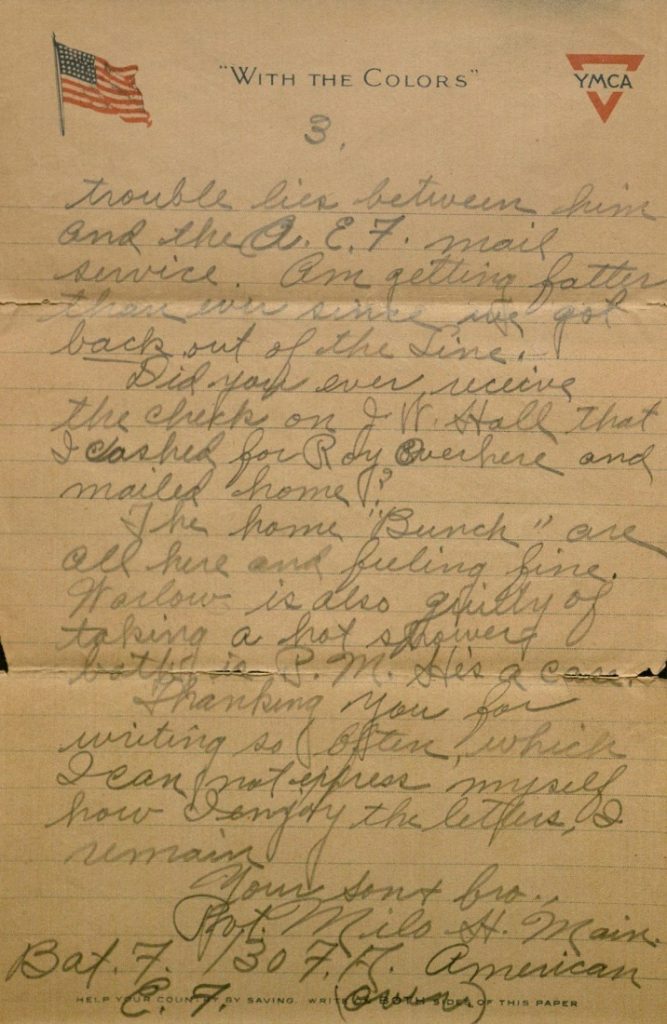 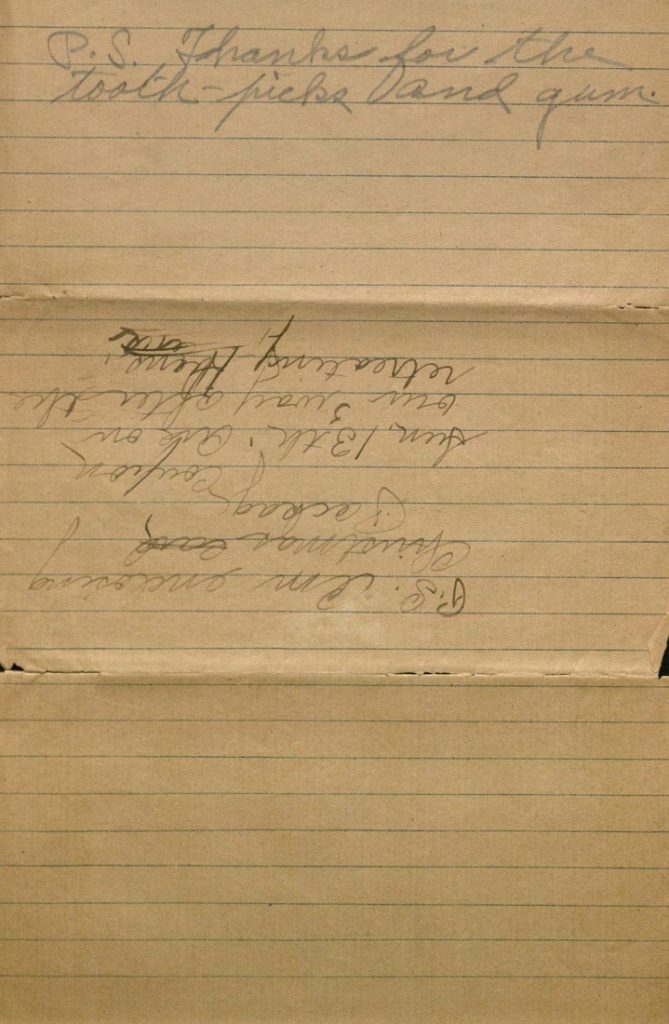 To-day the boys “Overhere” are anxiously awaiting Pres. Wilson’s reply to the Kaiser.

Wish that you would have explained about the J.W.A. (2) deal.

I received a letter from Raymond Flory (3) yesterday stating that he was in Eng. [England] yet, but expected to cross the Channel soon.

We have sure been having a live time at O.M. here in this French home. Am sitting before a bright fire in big fire place this evening after taking a hot shower-bath and donning a new suit of Uncle Sam’s woolen underwear. Also have been keeping my hide filled with hot-cakes, beef-steaks, French and Swiss cheese, Pumpkin-pie, apples and hazel-nuts galore. Wait until I step out in my new uniform which I am expecting to-morrow. The lady of the house insists that we meet the fair village queens of her city. Sure a whole show to be in a French home. While we were eating breakfast this A.M. the pheasant [peasant?] was threshing with his one-horse threshing machine not 30 ft. from the dining room-door. I started to come in this big-building last night and instead of getting in the living apartment I found my self in the cow dept. All the farming here is done inside. One pheasant was threshing with two big 600 lb. hogs yesterday. (I mentioned in my last letter about their machines being driven by tread mills). This life back of the Lines sure beats being up there where the rats (larger than cats) run relay races with the “Cooties.”

Am enclosing part of a cigarette box which I picked up in the underground city of Jerry’s [Germans] when up there last time on Front.

We, this Regt. were exceptionly fortunate in this last drive we made. Our “Lost in Action” will not exceed Sam Scott’s heirs (4). It will be some months before we go up again. The reason I will tell you when I get home. Want to go and see the Co. L. tomorrow.

Don’t become alarmed about “Old-Mike” if you fail to hear from him for weeks. For the trouble lies between him and the A.E.F. mail service. Am getting fatter than ever since we got back out of the Line.

Did you ever receive the check on J.W. Hall that I cashed for Roy Overhere and mailed home?

The home “Bunch” are all here and feeling fine. Warlow (5) is also guilty of taking a hot shower-bath in P.M. He’s a case.

Thanking you for writing so often, which I can not express myself how I enjoy the letters, I remain

P.S. Thanks for the tooth-picks and gum.

P.S. Am enclosing Christmas package coupon
Sun. 13th. Are on our way after the retreating Huns [Germans].

(1) The referenced clipping may have appeared in The Wichita Daily Eagle on September 17, 1918: “Lieutenant William Wooley who has been in France since March with members of Battery F, which he joined over a year ago, has returned to the United States where he will assist in organizing batteries at Camp Mead, Maryland.”

(2) Probably J. W. Achelpohl, a storeowner in Argonia who was Milo’s former employer when he worked as a clerk. He has been mentioned in some of Milo’s previous letters.

(3) Possibly Raymond Flory, mentioned in several of Milo’s previous letters. Biographical information about him can be found with Milo’s letter of June 2.

(4) This appears to be Sam C. Scott, one of Milo’s former coworkers; both were clerks at J. W. Achelpohl’s store in Argonia. According to his World War I draft registration card and other documentation, Scott was born in Michigan on May 22, 1881. By 1918 he was married to Ollie May Westrup.

(5) Alvin Lee Warlow served with Milo in Co. F. According to his World War I draft registration card, Warlow was born in Sumner County on December 8, 1893. In 1917, he was farming in Argonia.

This entry was posted on Monday, October 8th, 2018 at 8:41 am and is filed under Kansas Collection. You can skip to the end and leave a response. Pinging is currently not allowed.