In last week’s letter, Forrest asked Marie “would your Mother let you use my .25 cal. automatic? If you want to shoot, and your folks don’t object, you’re welcome to it.” The answer to the question was apparently “yes,” because in this week’s letters Forrest instructs Marie on how to handle, load, and clean the gun. “I am going into detail so as to be sure you will know how to take good care of it,” he writes, “you know how ‘fussy’ I am about my ‘junk.’”

I managed to get hold of a Colt instruction sheet and will try to give you a clear explanation of it. (Seeing as how you are only a girl.)

I am going into detail so as to be sure you will know how to take good care of it – you know how “fussy” I am about my “junk.”

Let’s know what the names of the main parts of the pistol are. On the second page is a diagram showing:

When the gun is taken apart you will have the loose parts shown on the third page. The firing pin – 7, 8 and 9 – will not always fall out.

The end of the barrel where the cartridge is “seated” when fired is the chamber. The other end is the muzzle end.

The magazine – No 23 – is the little box that holds the six cartridges. It must never be in the gun (empty or not) when the gun is being taken apart or put together.

Push it back far enough so that the muzzle end of the barrel shows as in picture on p. 4. Now, if you placed your thumb and finger right, you can hold the slide back and at the same time turn the barrel to the right a quarter turn, so that the 3 catches show, (as I have marked.)

Let the slide come forward and the gun will fall apart, exactly as shown on p. 3.

Now remove the barrel from the slide by turning the barrel a quarter turn to the left and drawing it out to the rear.

Put the cleaning rod in the barrel with its ring end at the muzzle. Put a small patch of soft cloth (no lint) in the slot and moisten it well with “Hoppe’s Nitro Powder Solvent – No. 9.” Draw this thru the barrel several times – always from the chamber toward the muzzle.

Now wipe dry and apply 3-1 oil in the same manner, leaving a thin coat in the barrel. The first dope cleans only – 3-1 oil lubricates and prevents rusting. <- PLEASE

Now before you put the gun together be sure there are no bits of lint or threads in barrel or working parts. Read the above instructions Chinese fashion and you will know how to put the pistol together. Put the magazine – empty – in last and take the whole outfit to bed with you.

Always be careful to keep dirt out of the barrel so don’t put gun in a dirty sweater pocket.

Don’t let anyone stand at your right hand where he may get hit in the eye by the empty shell which is thrown out.

If the gun is ice-cold, warm it up before cleaning.

Do I get your goat at last? 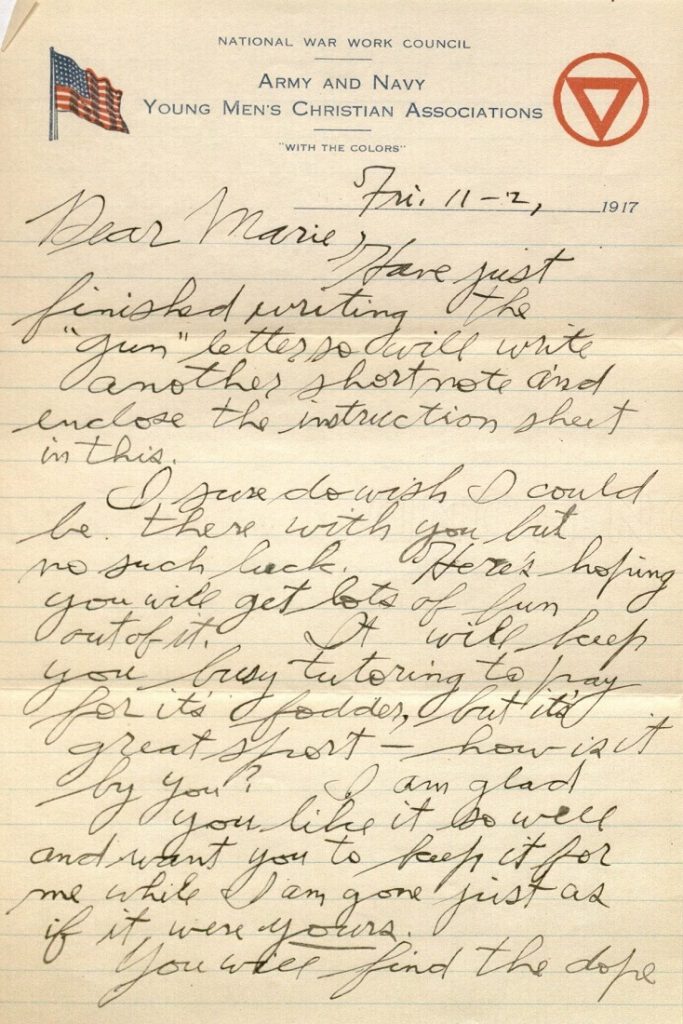 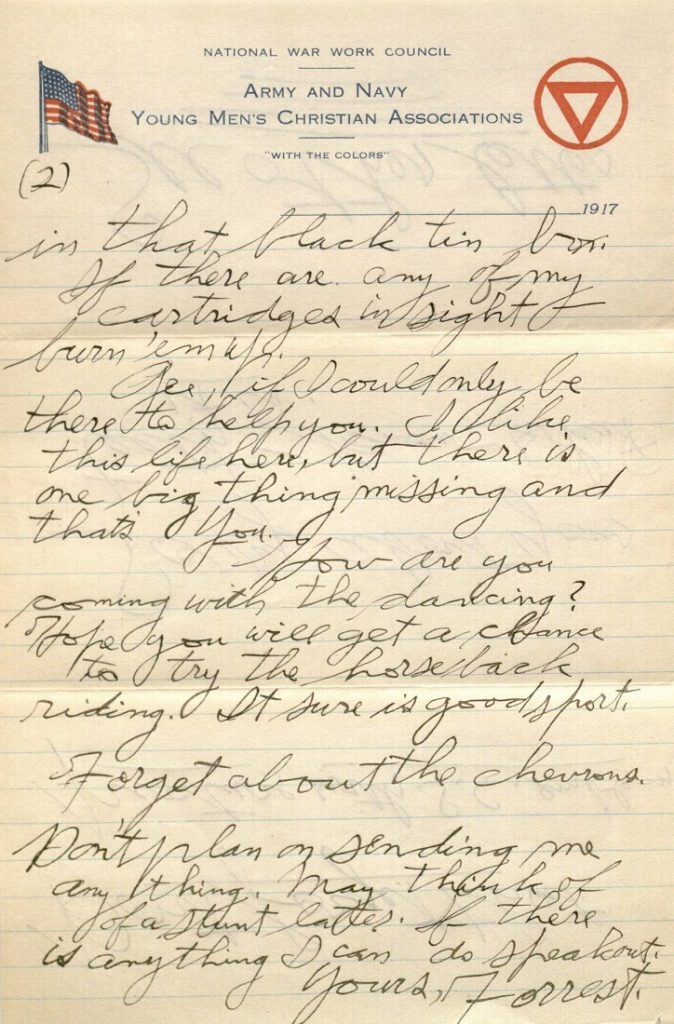 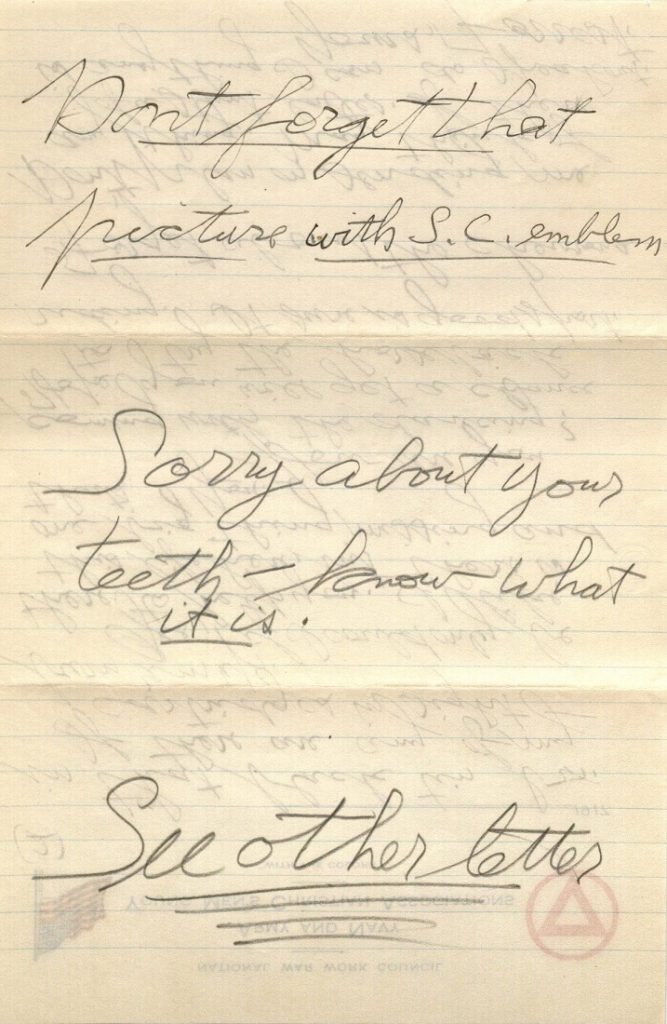 Have just finished writing the “gun” letter so will write another short note and enclose the instruction sheet in this.

I sure do wish I could be there with you but no such luck. Here’s hoping you will get lots of fun out of it. It will keep you busy tutoring to pay for its fodder, but it’s great sport – how is it by you? I am glad you like it so well and want you to keep it for me while I am gone just as if it were yours.

You will find the dope in that black tin box. If there are any of my cartridges in sight burn ‘em up. Gee, if I could only be there to keep you. I like this life here, but there is one big thing missing and that’s You.

How are you coming with the dancing? Hope you will get a chance to try the horseback riding. It sure is good sport.

Forget about the chevrons.

Don’t plan on sending me anything. May think of a stunt later. If there is anything I can do speak out.

Sorry about your teeth – know what it is.

This entry was posted on Monday, October 30th, 2017 at 8:00 am and is filed under Kansas Collection. You can skip to the end and leave a response. Pinging is currently not allowed.