Highlights from this week’s letters include speculation that Forrest’s unit will soon leave for Europe, partially based on the departure of other soldiers from Fort Leavenworth, and discussion about the new .45 caliber Colt automatic pistol he was issued (“Now don’t you wish I could come home and go shooting with you? I can hardly wait for the target practice”).

We are celebrating Washington’s birthday by taking the day off. We are having regular Spring weather after a short cold snap. Every few minutes this morning someone would remark “’Wish we had them durn horses back,” and believe me “them’s my sentiments,” too. You should see our radio class in the new stables. We have big tables and a number of buzzers and a large blackboard nailed on the wall. We have fifty minute periods, the same as in High School, do assigned problems in electricity, and have buzzer practice in here.

The Fifth Battalion, S.C. [Signal Corps] left for the coast a few days ago. There were quite a number of the boy’s mothers, wives and “best girls” to see them off. Believe me, those fellows looked pretty “blue.” Not very much “Where-do-we-go-from-here-boys” spirit in the whole outfit.

We expect to go within the next four weeks. Our mess sergeant has orders to be prepared to provide us with one days rations at the port of Embarkation and five days rations in England. I quit helping the Supply Sergeant Monday with the clerical and strong back stuff. We know now just what we lack and the requisition was sent in last week. We will get our guns in U.S. but new French radio equipment on the other side.

We were issued thirty .45 cal. Colt automatic pistols, yesterday, for practice on the range. These will be returned to the Ordnance Dept. before we leave. They sure are some guns. When you take the barrel of one out to clean it, it looks like a piece of young gas pipe. In appearance the .45 Colt is the same as yours, which is a .25 cal., but the working parts inside are altogether different. The hammer is outside and can be cocked with the thumb.(?) The .45 caliber bullet only lacks 5/100 of an inch of being twice the diameter of the .25 cal., so you can see how large the cartridge is. Now don’t you wish I could come home and go shooting with you? I can hardly wait for the target practice. Did you get the S.C. Drill book yet? I know the package got there alright.

No, I don’t care to learn to dance at any time. To have a share in making the Kaiser dance is the height of my ambition and I don’t care two whoops after that.

Glad you are having good luck with your elocution. Did “Bat” perform, he is “right there” when he does.

Stock is getting along great at Champaign, Ill. I will send his letter to Mother as soon as I answer it.

Say, if you ever get a chance to see Elsie Ferguson in “Rose of the World,” don’t miss it.

Well I must drop a line to Blanche. 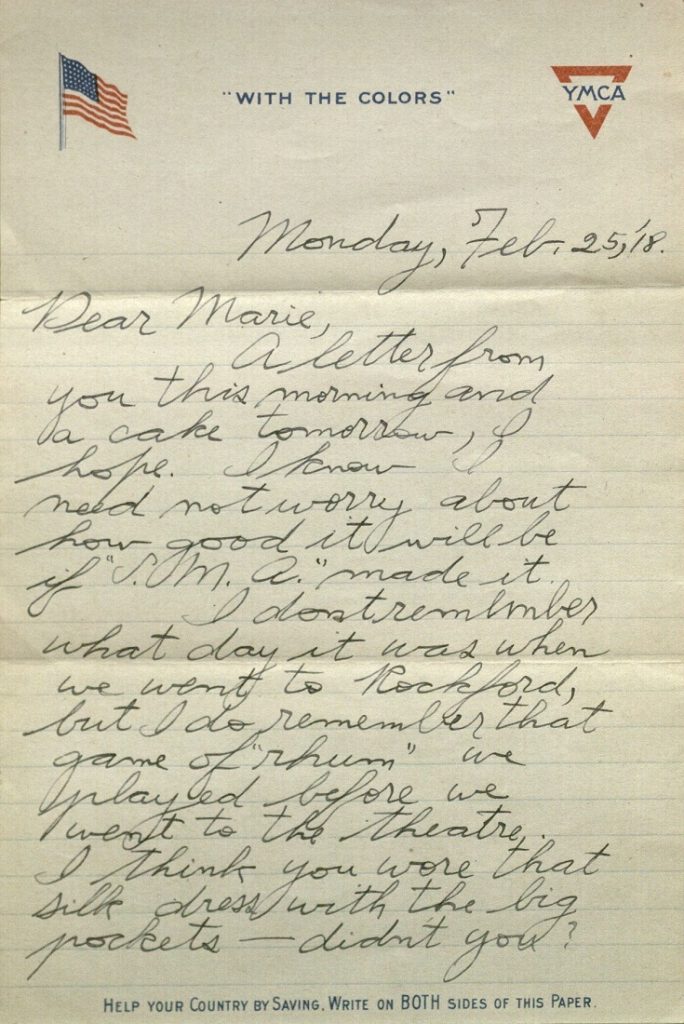 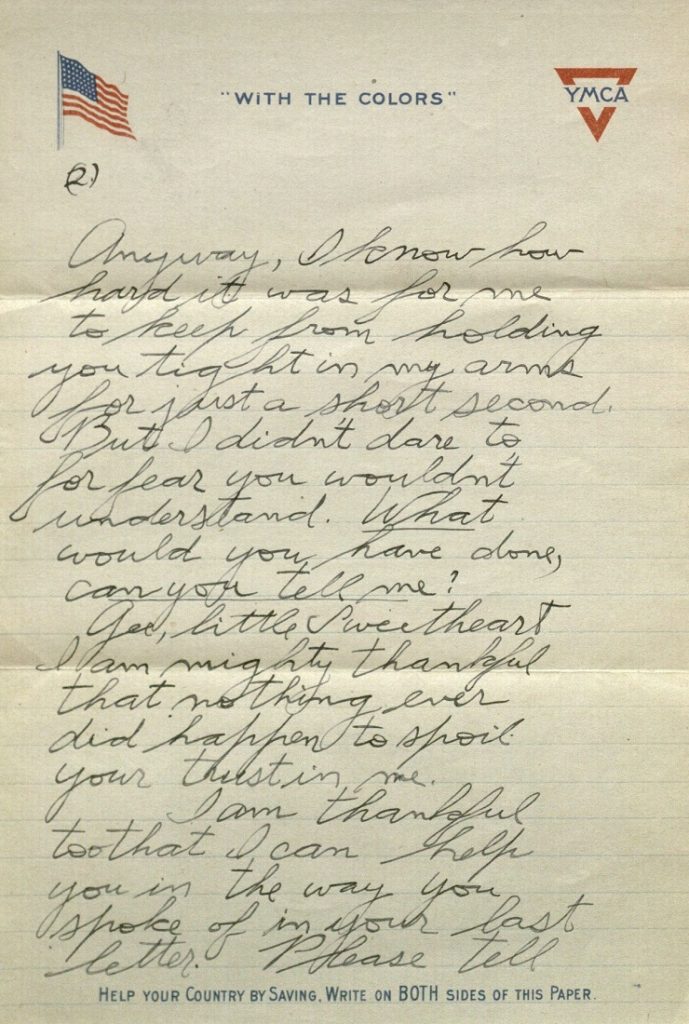 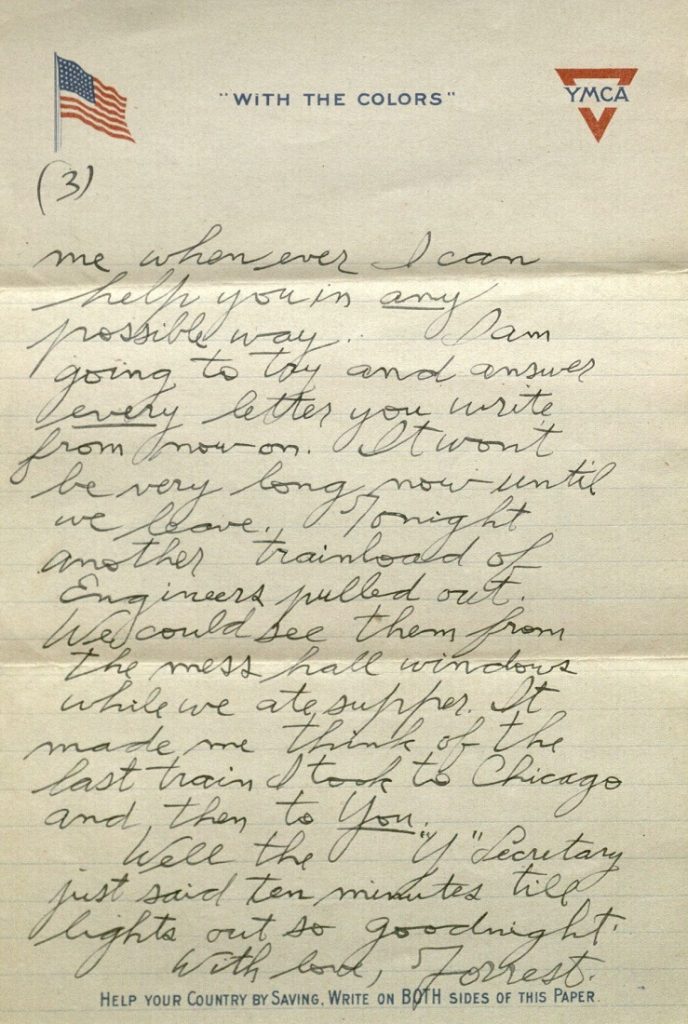 A letter from you this morning and a cake tomorrow, I hope. I know I need not worry about how good it will be if “S.M.A.” [Ava Marie Shaw, backwards] made it.

I don’t remember what day it was when we went to Rockford, but I do remember that game of “rhum” we played before we went to the theatre. I think you wore that silk dress with the big pockets – didn’t you? Anyway, I know how hard it was for me to keep from holding you tight in my arms for just a short second. But I didn’t dare to for fear you wouldn’t understand. What would you have done, can you tell me?

Gee, little Sweetheart I am mighty thankful that nothing ever did happen to spoil your trust in me.

I am thankful too that I can help you in the way you spoke of in your last letter. Please tell me when ever I can help you in any possible way. I am going to try and answer every letter you write from now on. It won’t be very long now until we leave. Tonight another trainload of Engineers pulled out. We could see them from the mess hall windows while we ate supper. It made me think of the last train I took to Chicago and then to You.

Well the “Y” Secretary just said ten minutes till lights out so goodnight.

This entry was posted on Monday, February 19th, 2018 at 2:06 pm and is filed under Kansas Collection. You can skip to the end and leave a response. Pinging is currently not allowed.