Highlights from this week’s letters include Forrest arguing for the importance of sleep to good health (“that is one reason why all of us here gain in weight and health”), discussing new service radio equipment (“it is all for use in the trenches, while our training radio apparatus was all for open field service”), and advising Marie about his sister Blanche (“don’t let a few little sharp words hurt your feelings”). 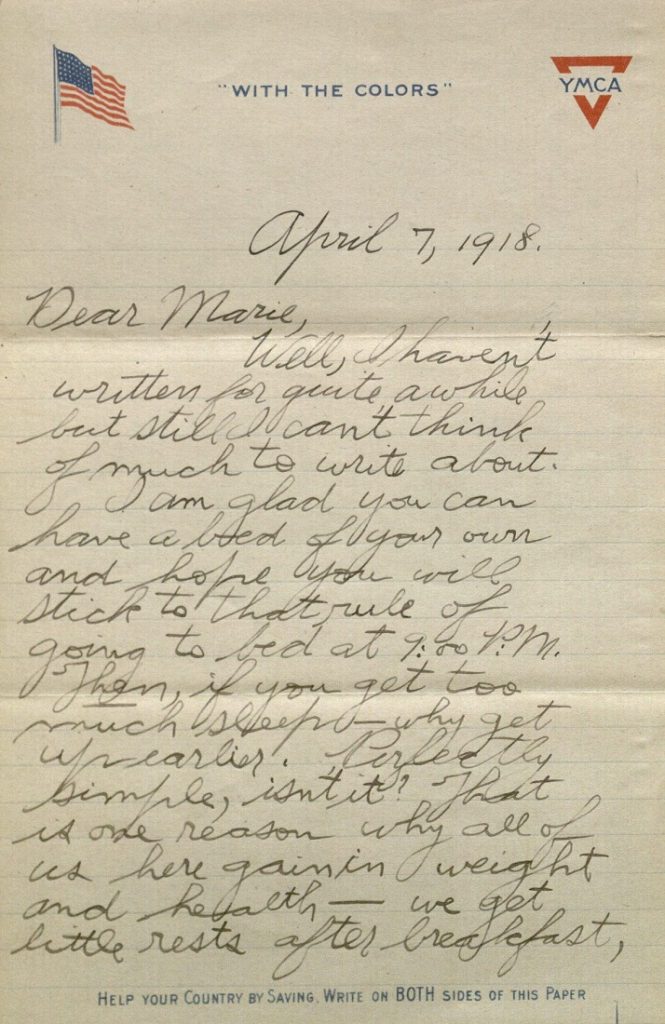 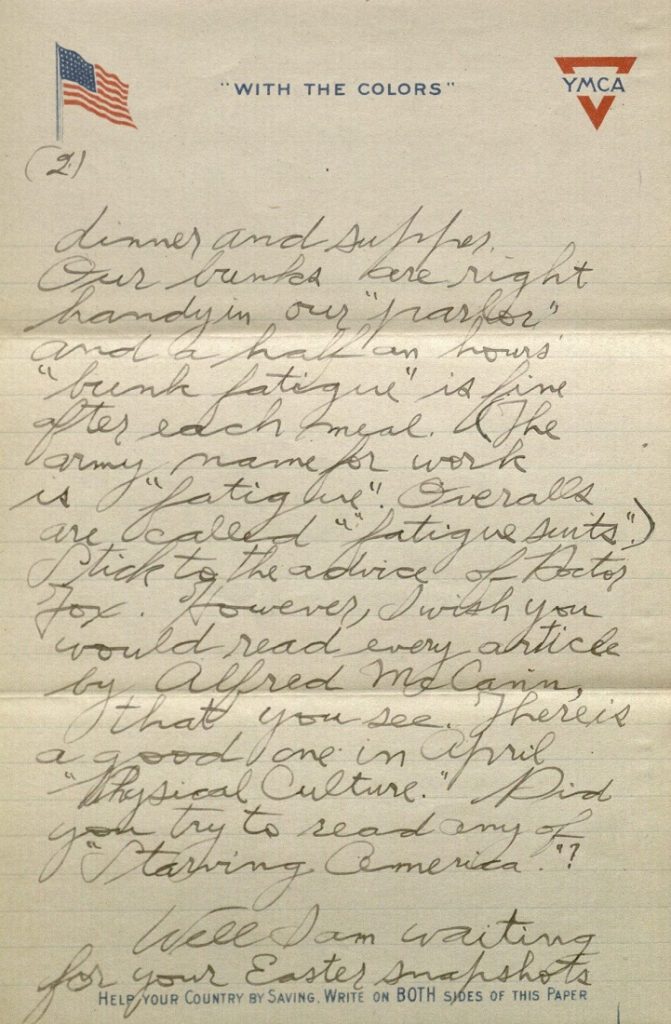 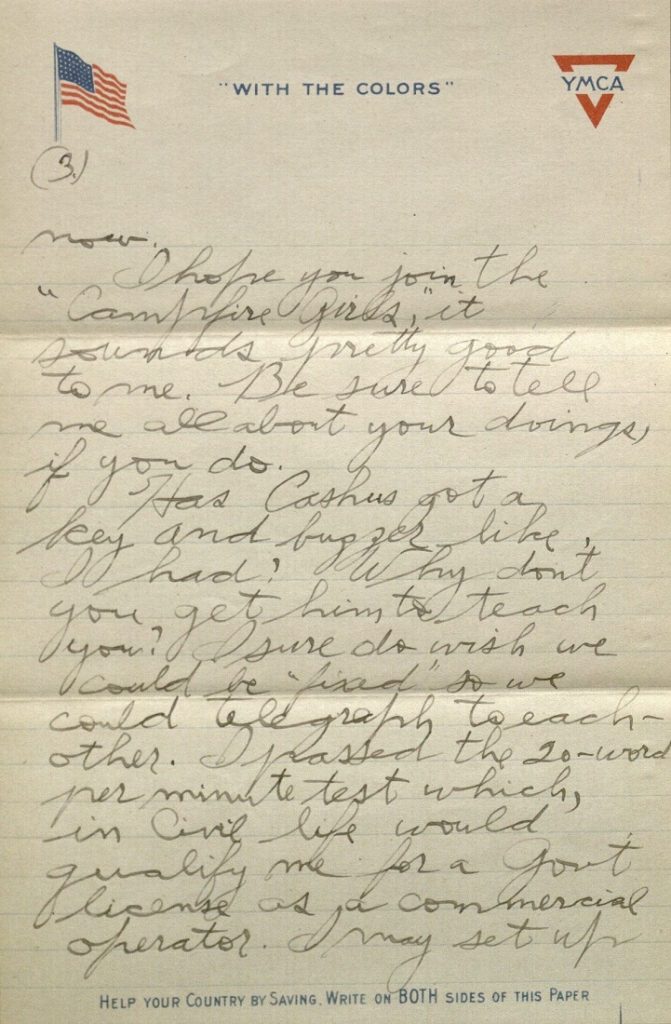 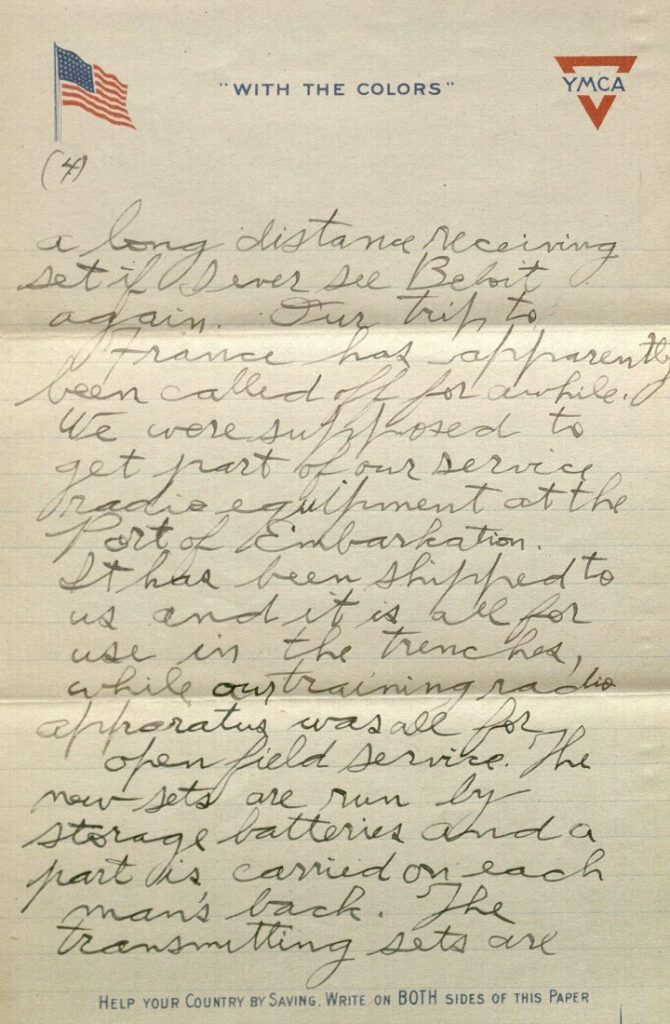 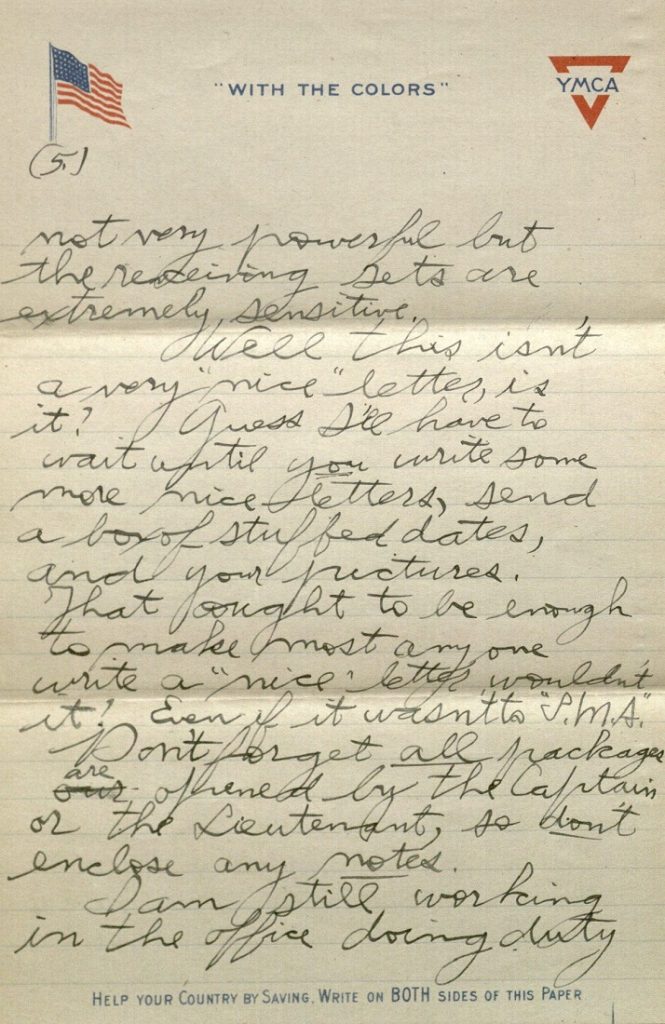 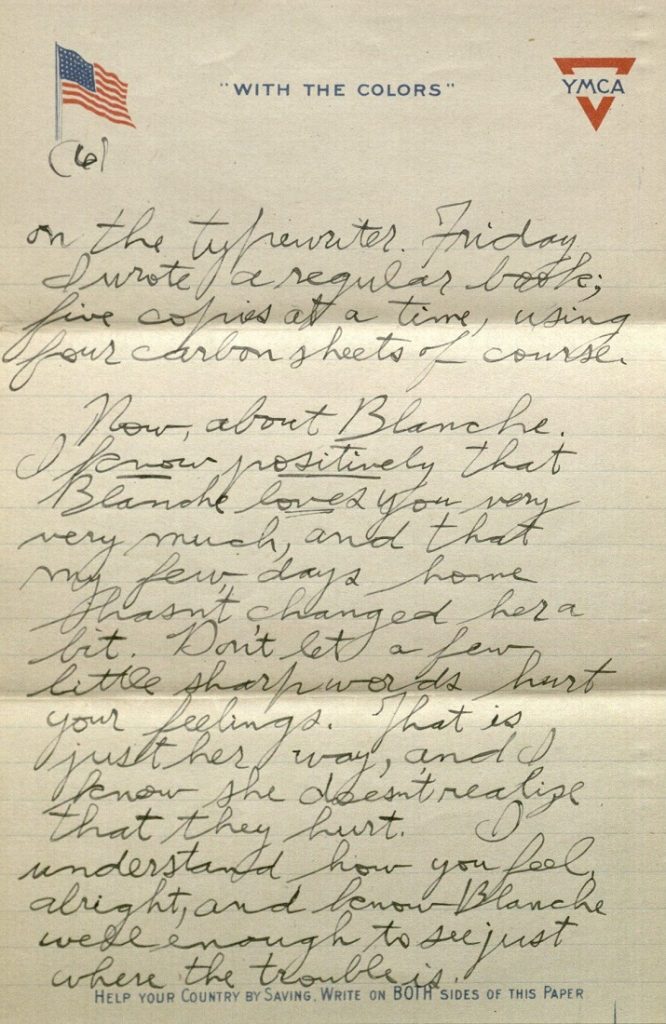 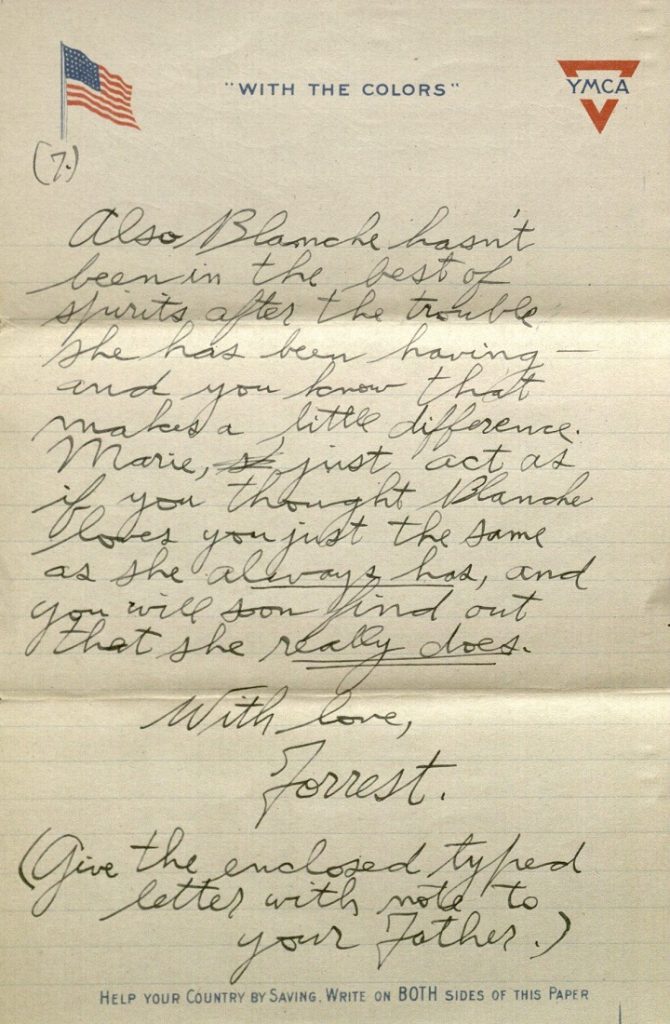 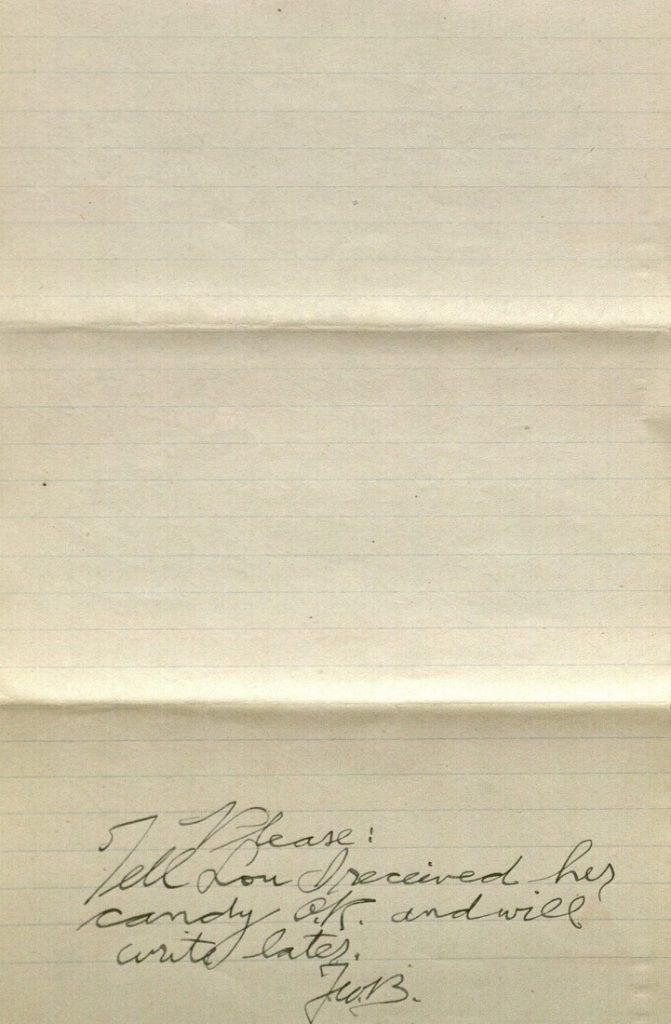 Well, I haven’t written for quite awhile but still I can’t think of much to write about.

I am glad you can have a bed of your own and hope you will stick to that rule of going to bed at 9:00 P:M. Then, if you get too much sleep – why get up earlier. Perfectly simple, isn’t it? That is one reason why all of us here gain in weight and health – we get little rests after breakfast, dinner and supper. Our bunks are right handy in our “parlor” and a half an hours “bunk fatigue” is fine after each meal. (The army name for work is “fatigue.” Overalls are called “fatigue suits.”) Stick to the advice of Doctor Fox. However, I wish you would read every article by Alfred McCann, that you see. There is a good one in April “Physical Culture.” Did you try to read any of “Starving America”?

Well I am waiting for your Easter snapshots now.

I hope you join the “Campfire Girls,” it sounds pretty good to me. Be sure to tell me all about your doings, if you do.

Has Cashus got a key and buzzer like I had? Why don’t you get him to teach you? I sure do wish we could be “fixed” so we could telegraph to eachother. I passed the 20-word per minute test which, in civil life would qualify me for a Gov’t license as a commercial operator. I may set up a long distance receiving set if I ever see Beloit again. Our trip to France has apparently been called off for awhile. We were supposed to get part of our service radio equipment at the Port of Embarkation. It has been shipped to us and it is all for use in the trenches, while our training radio apparatus was all for open field service. The new sets are run by storage batteries and a part is carried on each man’s back. The transmitting sets are not very powerful but the receiving sets are extremely sensitive.

Well this isn’t a very “nice” letter, is it? Guess I’ll have to wait until you write some more nice letters, send a box of stuffed dates, and your pictures. That ought to be enough to make most anyone write a “nice” letter wouldn’t it? Even if it wasn’t to “S.M.A.” Don’t forget all packages are opened by the Captain or the Lieutenant, so don’t enclose any notes.

I am still working in the office doing duty on the typewriter. Friday I wrote a regular book; five copies at a time, using four carbon sheets of course.

Now, about Blanche [Forrest’s older half-sister]. I know positively that Blanche loves you very much, and that my few days home hasn’t changed her a bit. Don’t let a few little sharp words hurt your feelings. That is just her way, and I know she doesn’t realize that they hurt. I understand how you feel, alright, and know Blanche well enough to see just where the trouble is.

Also Blanche hasn’t been in the best of spirits after the trouble she has been having – and you know that makes a little difference. Marie, just act as if you thought Blanche loves you just the same as she always has, and you will soon find out that she really does.

(Give the enclosed typed letter with note to your Father.)

Please: Tell Lou I received her candy O.K. and will write later.  FWB.

This entry was posted on Monday, April 2nd, 2018 at 10:41 am and is filed under Kansas Collection. You can skip to the end and leave a response. Pinging is currently not allowed.