In this letter, Milo discusses a harrowing experience he had in battle the previous September. “About 4 A.M. [the Germans] put over a real barrage,” he writes. “It was then I found partial safty [safety] from flying fragments in an old gun position. Had I staid out as Randall did I would no doubt of got mine.” 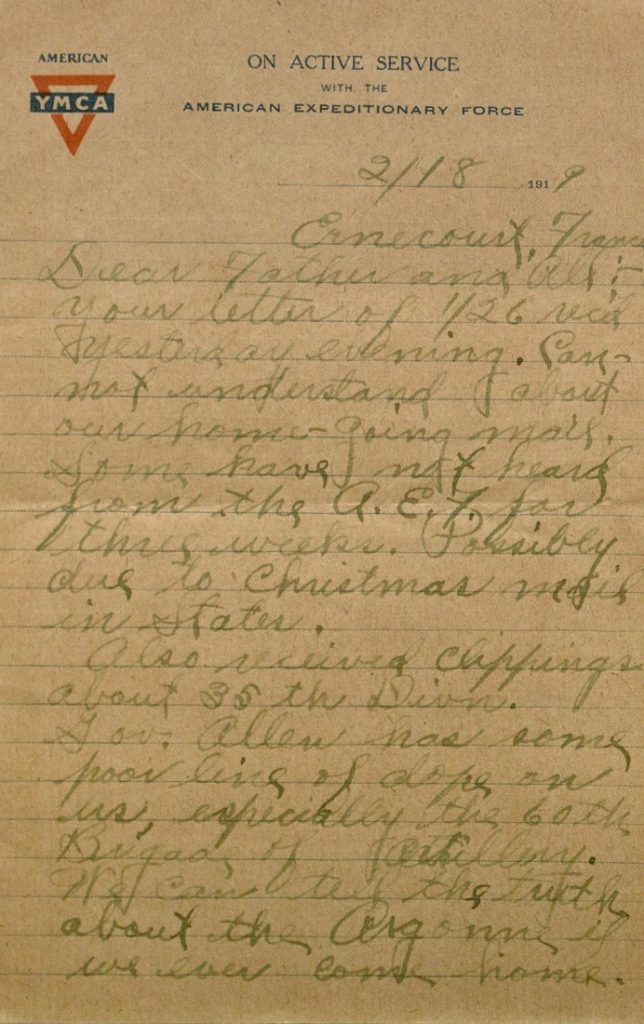 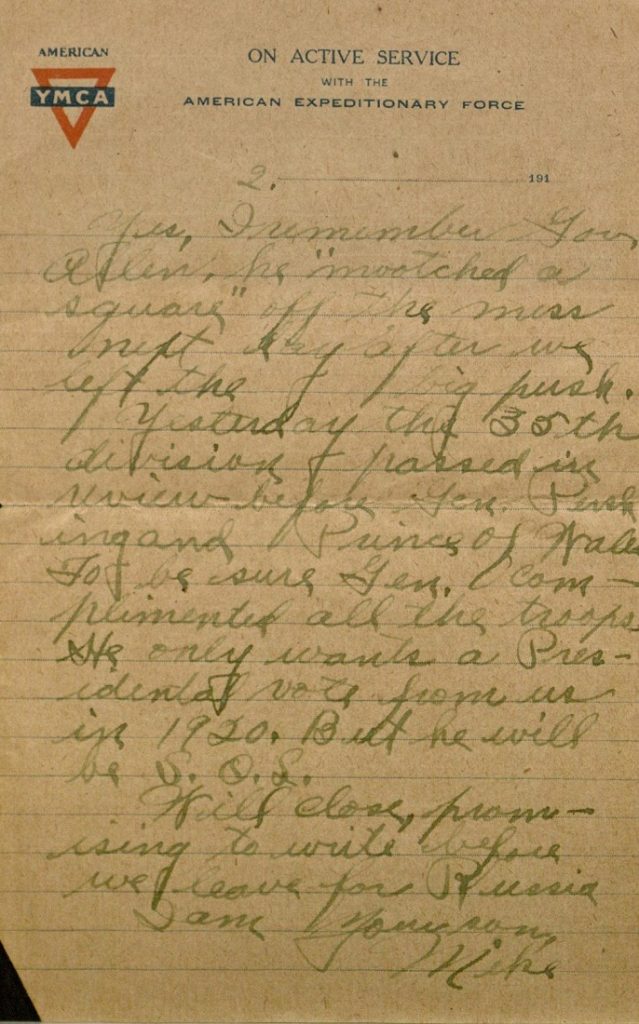 Dear Father and All:-

Your letter of 1/26 rec’d [received] yesterday evening. Cannot understand about our home-going mail. Some have not heard from the A.E.F. for three weeks. Possibly due to Christmas mail in States.

Also received clippings about 35th Divn [Division]. Gov. Allen has some poor line of dope [information] on us, especially the 60th Brigade of Artillery. We can tell the truth about the Argonne if we ever come home (1).

Yes, I remember Gov. Allen, he “mootched a square [meal]” off the mess next day after we left the big push.

Yesterday the 35th division passed in review before Gen. Pershing and Prince of Wales. To be sure Gen. complimented all the troops. He only wants a Presidental vote from us in 1920. But he will be S.O.L.

Will close, promising to write before we leave for Russia.

I am your son,
Mike

(1) One of the clippings may have been a lengthy January 14th article from the Wellington Daily News that reported on a talk given by Governor Allen in Topeka the same day. Allen talked about “the experiences of the Thirty-fifth and Eighty-first divisions” based on his time with the units while he was in France with the Red Cross. “Quite informally and in his inimitable style,” the article stated, “Governor Allen began his story of the deeds of Kansas men in the great war for humanity…The story held the audience almost breathless at times. At other moments they cheered or laughed. It was a story that Kansas had been waiting for.”

Last night I received one letter from you under date of 1/24, also one from W.E. Hankins (1), and Roy McClure (2). Roy’s address is Rumelange, Luxembourg.

The clipping you enclosed about the return of the 35th and 89th divisions is quite true. Don’t think we will leave here until Mar. 15th now.

Mrs. J.W. Reams (3) surely was getting very old and feeble. Fine old lady to be sure.

The article about Ralph Randall is quite true, I can vouch for his statement, for I was Johnny on the spot. It was about 4 o’clock on the morning of Sept. 24th after our arrival late the evening before. Ammution [ammunition] trucks had been bringing up high explosives all night and Jerry [Germans] had been sending us a few reminders of war all night, but about 4 A.M. he put over a real barrage, it was then I found partial safty from flying fragments in an old gun position. Had I staid out as Randall did I would no doubt of got mine. After the boy was shot up he was brought in this old gun position for 1st aid and it was there that I gave the Lt. Dr. and Red Cross boys one of my blankets to wrap him in. He was rushed to hospital soon, same as several others were that morning. It was early that night that I was sent to mud hole by one of the Hun’s [Germans’] big shells. Some concussion I witnessed.

How is Genevieve getting along? Bet she is some girl now.

Will close for now, only hoping you have received some of the many letters I have written since returning from Paris.

Assuring you I am well and have any kind of a tonic here in this cafe necessary for perfect health and happiness.

(2) Milo has mentioned Roy McClure in several previous letters. Biographical information about Roy can be found in the blog post featuring Milo’s letter of July 24, 1918.

(3) The Argonia Argosy reported on January 23, 1919, that “Mrs. Rebeccah A. Ream, aged 78 years old, who has been living alone on her farm 9 miles southeast of Argonia since the death of her husband about four years ago, was found dead, Tuesday morning by Emery Young, a neighbor, who had gone to her home to see her about a colt she had asked him to break for her. When Mr. Young knocked on the door it swung back and he saw Mrs. Ream sitting in a chair by the stove dead.”

This entry was posted on Monday, February 18th, 2019 at 10:07 am and is filed under Kansas Collection. You can skip to the end and leave a response. Pinging is currently not allowed.