In this week’s letter, Milo describes reaching the Alps. “Wish you could see how we are located in these foot hills of the silver shinning Alp Mountains,” he wrote. “I can sit on my bed, not bunk, and look out a glass front down the mountain slope just as many millionaire tourists from America did up until 1914.” 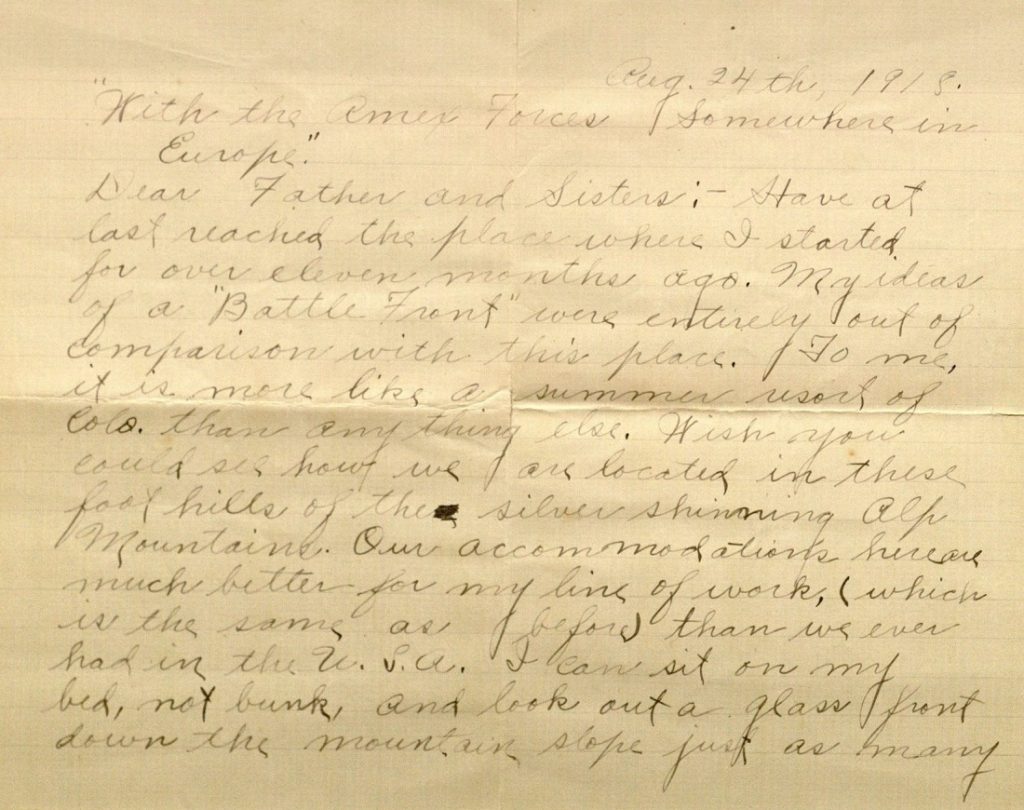 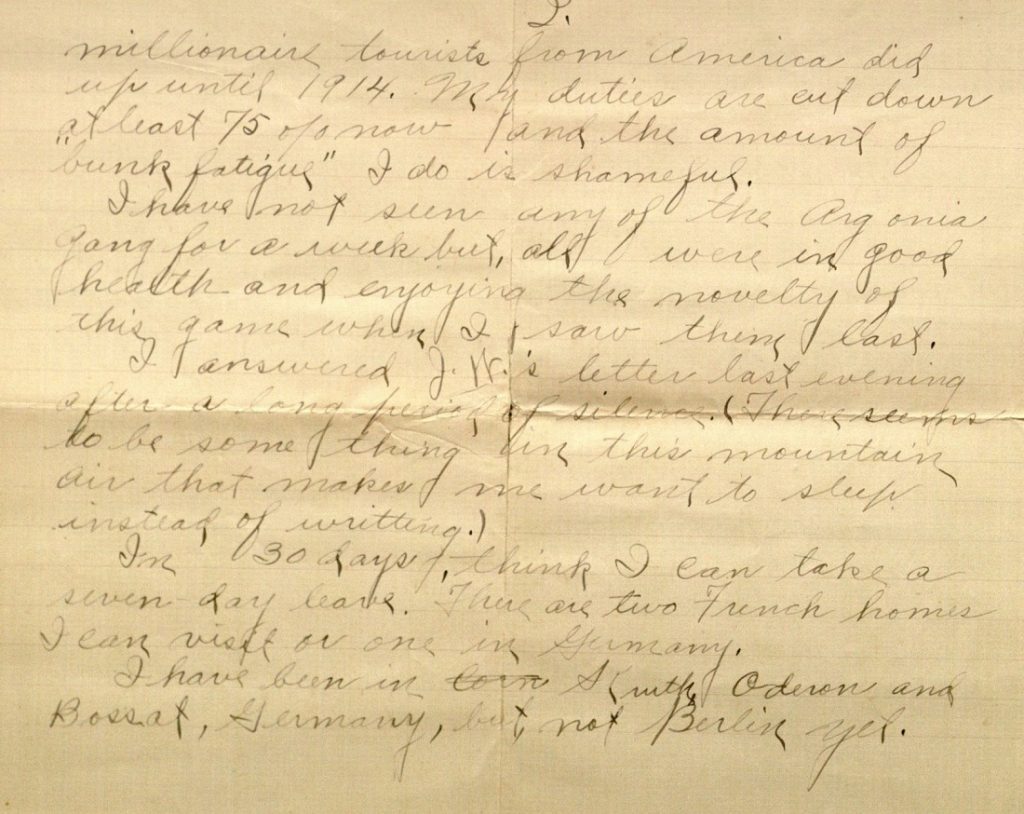 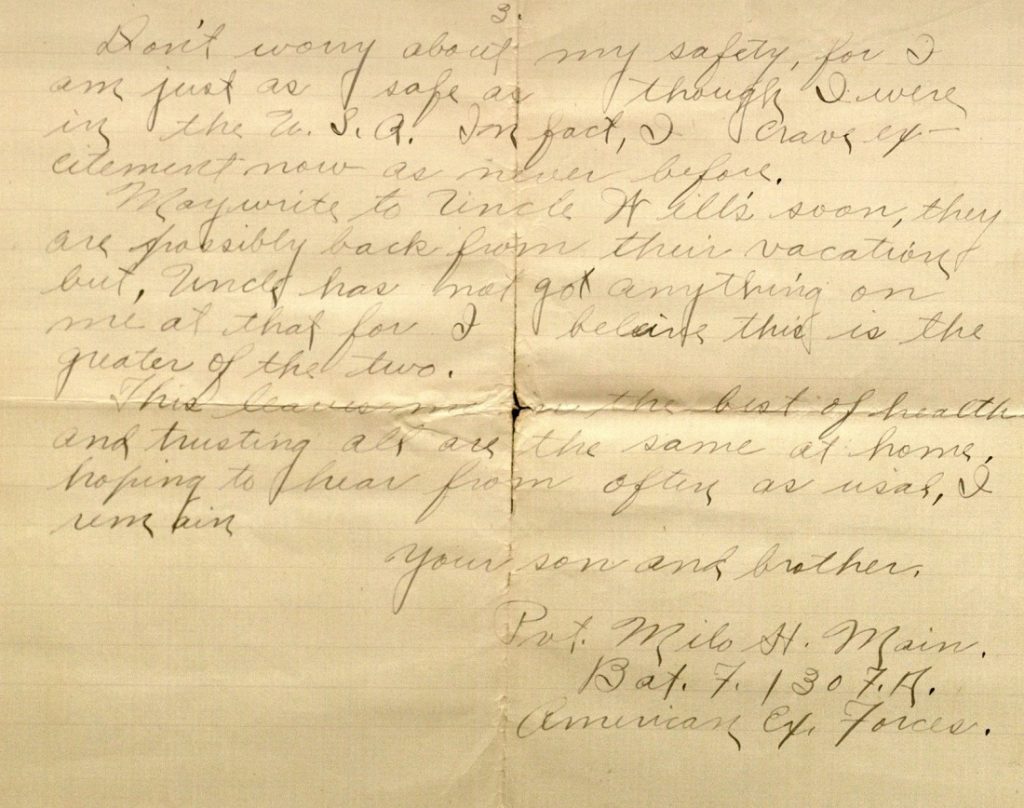 Dear Father and Sisters:- Have at last reached the place where I started for over eleven months ago. My ideas of a “Battle Front” were entirely out of comparison with metformin-online.com. To me, it is more like a summer resort of Colo. than any thing else. Wish you could see how we are located in these foot hills of the silver shinning Alp Mountains. Our accommodations here are much better for my line of work, (which is the same as before) than we ever had in the U.S.A. I can sit on my bed, not bunk, and look out a glass front down the mountain slope just as many millionaire tourists from America did up until 1914. My duties are cut down at least 75% now and the amount of “bunk fatigue” I do is shameful.

I have not seen any of the Argonia gang for a week but, all were in good health and enjoying the novelty of this game when I saw them last.

I answered J.W.’s (1) letter last evening after a long period of silence. (There seems to be some thing in this mountain air that makes me want to sleep instead of writting.)

In 30 days, think I can take a seven-day leave. There are two French homes I can visit or one in Germany.

Don’t worry about my safety, for I am just as safe as though I were in the U.S.A. In fact, I crave excitement now as never before.

May write to Uncle Will’s (4) soon, they are possibly back from their vacation but, Uncle has not got anything on me at that for I beleive this is the greater of the two.

This leaves me in the best of health and trusting all are the same at home, hoping to hear from often as usal, I remain

Your son and brother,

(1) Possibly J. W. Achelpohl, a storeowner in Argonia mentioned in Milo’s letter of August 19th. According to Milo’s World War I draft registration card, Achelpohl was his employer when he worked as a clerk.

(2) Milo may be referring to Kreuth in southern Germany.

(3) It’s not clear what places Milo is referencing here.

(4) Probably William M. Henry, a brother of Milo’s mother mentioned in his letter of August 19th. Born in Illinois in 1861, William relocated to Sumner County, Kansas, with his wife and children around 1900.

This entry was posted on Monday, August 20th, 2018 at 8:00 am and is filed under Kansas Collection. You can skip to the end and leave a response. Pinging is currently not allowed.

These letters are interesting, I currently am reading “The Great Influenza” written by John M. Berry and the history both are covering is WW1. Very good to see Milo H. Main was in good health when this was written as fellow soldiers were dying of influenza in the pandemic across Europe, America, Africa.

Thank you for your comment. Watch our blog for an upcoming post about the influenza epidemic during the time of World War I and how it affected soldiers from Kansas as well as life at the University of Kansas. If you are interested in this topic, you might look into the history of Fort Riley and Camp Funston in Kansas. Also, the University of Michigan Center for the History of Medicine has an interesting online encyclopedia about the influenza epidemic of 1918-1919 in the U.S. at https://www.influenzaarchive.org/index.html.