Leonard Henry Hollmann from Eudora, Kansas was passionate about photography and collecting photographs, especially those about Kansas or by Kansas photographers.

Mr. Hollmann donated his photographic collection to the Spencer Research Library shortly before he passed away in January 2016. Containing over 10,000 images, the collection is a gem. Hollmann had carefully collected images from across Kansas (and some from Missouri and Nebraska), with a concentration on Lawrence and Douglas County. Most of the images date from the 1850s-1930s.

The collection contains many types of photographic formats including ambrotypes, tintypes, cartes de visite, cabinet cards, postcards, and stereoviews. The arranging and describing of the collection, because of its enormity, took seven months.

This amazing collection is now available for researchers. View the finding aid here: Guide to the Leonard Hollmann photograph collection. At the very top of the finding aid there is a search box where you can enter any keyword to search the document. Try typing in a town name or something else, like “dog” or “bicycle.”

A selection of the Hollmann photograph collection is on exhibit in the North Gallery of the Spencer Research Library until the end of August. The temporary exhibit highlights about 35 images of Lawrence, Kansas and other Kansas towns. The photographs on view date from 1862 to 1918. Some of them are rare and have not been viewed by the public before.

Our two-part blog will feature Lawrence photographs in the first installment and Kansas images in the second installment. 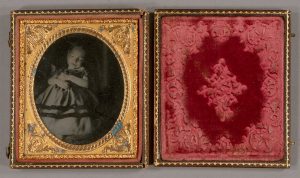 One of the most defining moments in Lawrence’s history was Quantrill’s Raid in 1863. Before and during the Civil War, Kansas and Missouri had many unofficial skirmishes between each other. William Quantrill’s raid on the free-state town of Lawrence, Kansas (also known as the Lawrence Massacre) was a defining moment in this time period. At dawn on August 21, 1863, Quantrill and his guerrillas rode into Lawrence, where they burned much of the town and killed between 160 and 190 men and boys.

An early type of photograph, ambrotypes were produced by placing a glass negative against a dark background. Although they were more affordable for families, it was uncommon to have an ambrotype photograph taken. Unlike tintypes, only one ambrotype was produced during a photographic sitting. It is possible that this is the first time that this photograph of Freddie Read has ever been published, or been on exhibit! 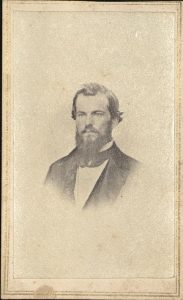 Originally from Connecticut, John Lewis Crane was a partner in a shoe store in Lawrence before he was killed during Quantrill’s raid. Photographs of two of his siblings and brother-in-law Gurdon Grovenor are also in this collection. 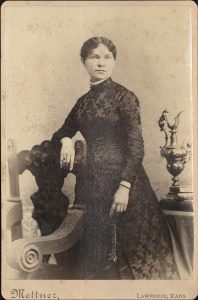 A Quantrill’s raid survivor, Hannah Oliver received her Bachelor of Arts in 1874 and her Master of Arts in 1888 from the University of Kansas. She joined the faculty of KU in 1890, teaching Latin. She retired in 1931. The finding aid for her personal papers at Spencer Research Library can be accessed through this link: Guide to the Hannah Oliver collection.

The “New Building,” as it was called when it was built in 1872, was later called “Fraser Hall” after KU’s second chancellor, General John Fraser. In these images, several covered buggies and horses are visible next to the building. It was demolished in 1965.

The Hollmann photograph collection contains thousands of stereoview cards. These were popular as a form of entertainment from the 1850s to the 1930s. To view the image, the card was inserted into a stereoviewer. When the two separate images depicting left-eye and right-eye views of the same scene are viewed through the viewer, the brain merges both together, creating one three-dimensional image. While stereoview cards in general are common, the cards in the Hollmann photograph collection are mostly of rarer scenes. Some may even be one-of-a-kind.

Now known as the Haskell Indian Nations University, images of this important Lawrence school and college are represented in the Hollmann photograph collection. 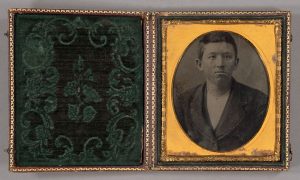 Little is known of the cased tintype of Standing Fox, also known as Ephram Cloud, Junior. According to paperwork with the image, he may be associated with Haskell Institute. 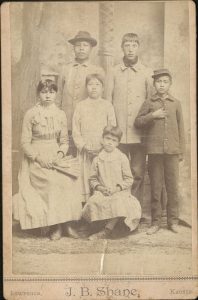