“This is Halloween night in the U.S.A.,” writes Milo in this week’s letter. He also describes some souvenirs he is sending to his family: covers or tops from bottles of French wine, a “pipe or cigar lighter made from the brass casing of a big shell,” and a “lighter…made of two round buckle ornaments from belts of German prisoners.” 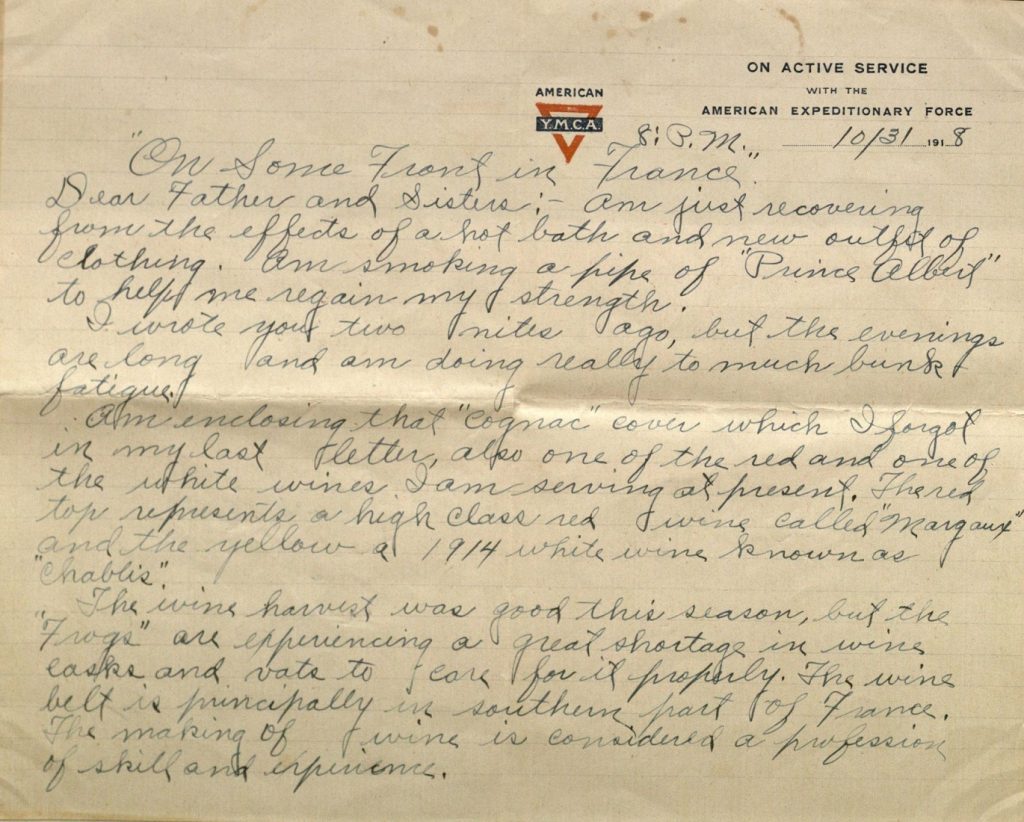 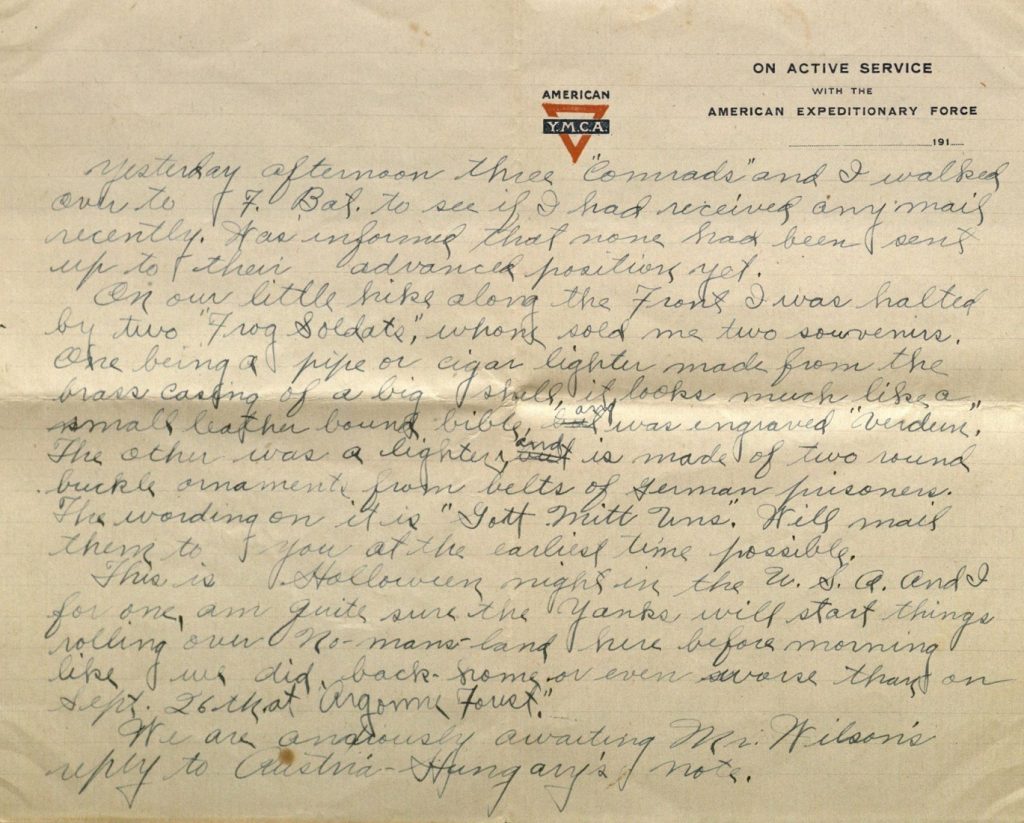 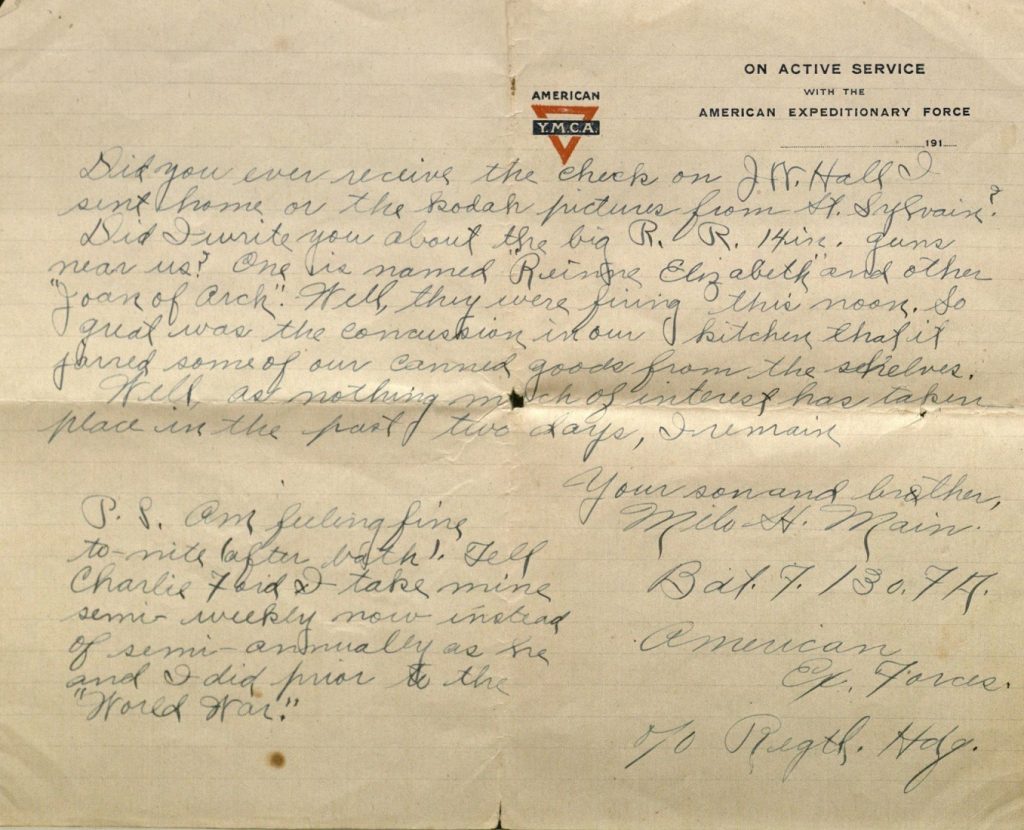 “On Some Front in France.”

Dear Father and Sisters:- Am just recovering from the effects of a hot bath and new outfit of clothing. Am smoking a pipe of “Prince Albert” to help me regain my strength.

I wrote you two nites ago, but the evenings are long and am doing really to much bunk-fatigue.

Am enclosing that “cognac” cover which I forgot in my last letter, also one of the red and one of the white wines. I am serving at present. The red top represents a high class red white called “Margaux” and the yellow a 1914 white wine known as “Chablis.”

The wine harvest was good this season, but the “Frogs” [French] are experiencing a great shortage in wine casks and vats to care for it properly. The wine belt is principally in southern part of France. The making of wine is considered a profession of skill and experience.

Yesterday afternoon three “comrads” and I walked over to F. Bat. to see if I had received any mail recently. Was informed that none had been sent up to their advanced position yet.

On our little hike along the Front I was halted by two “Frog Soldats,” [French soldiers] whom sold me two souvenirs. One being a pipe or cigar lighter made from the brass casing of a big shell, it looks much like a small leather bound bible, and was engraved “Verdun.” The other was a lighter, and is made of two round buckle ornaments from belts of German prisoners. The wording on it is “Gott Mitt Uns.” Will mail them to you at the earliest time possible.

This is Halloween night in the U.S.A. and I for one, am quite sure the Yanks will start things rolling over No-mans-land here before morning like we did back home or even worse than on Sept. 26th at “Argonne Forest.”

We are anxiously awaiting Mr. Wilson’s reply to Austria-Hungary’s note.

Did you ever receive the check on J.W. Hall I sent home or the kodak pictures from St. Sylvain? Did I write you about the big R.R. 14in. guns near us? One is named “Reinne Elizabeth” and other “Joan of Arch.” Well, they were firing this noon. So great was the concussion in our kitchen that it jarred some of our canned goods from the shelves.

Well, as nothing much of interest has taken place in the past two days, I remain

P.S. Am feeling fine to-nite (after bath). Tell Charlie Ford I take mine semi-weekly now instead of semi-annually as he and I did prior to the “World War.”

This entry was posted on Monday, October 29th, 2018 at 9:43 am and is filed under Kansas Collection. You can skip to the end and leave a response. Pinging is currently not allowed.