In this week’s letter, Milo describes how he survived some severe winter weather. “Yesterday morning it started snowing again,” he wrote, “and by noon it was a ‘Royal Kansas Blizzard.’ And last night it was some cold, but don’t worry about me, for I was in the hay for true. Big Texan fighter and I were buried up in hay-mow under boo-coo blankets in the hay. Kept as warm as pair of ‘Kittens.’ Many of boys slept on on hard floors and no fires.” Looking ahead, Milo writes that he hopes to “have the pleasure of eating July 4th dinner with you.” 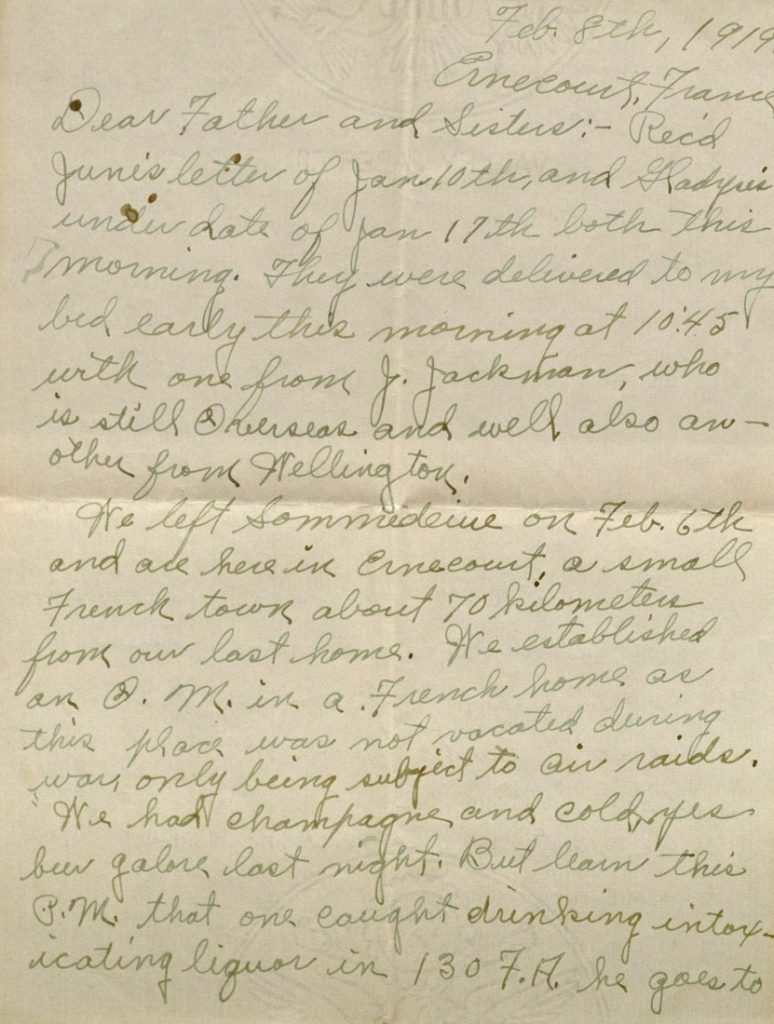 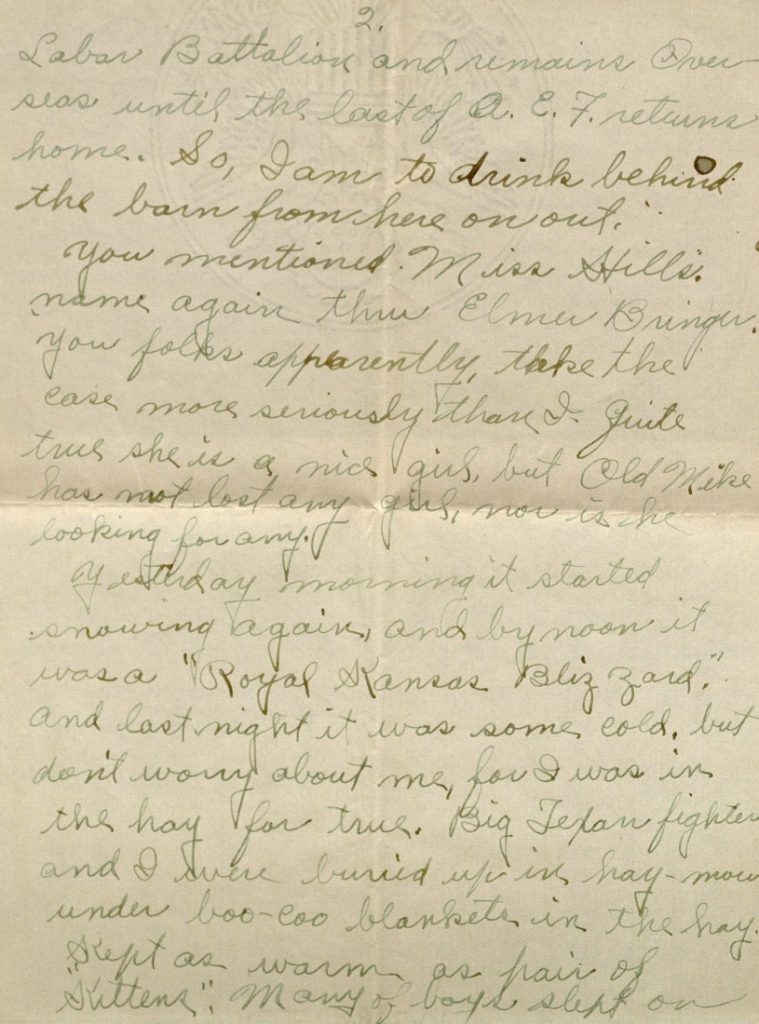 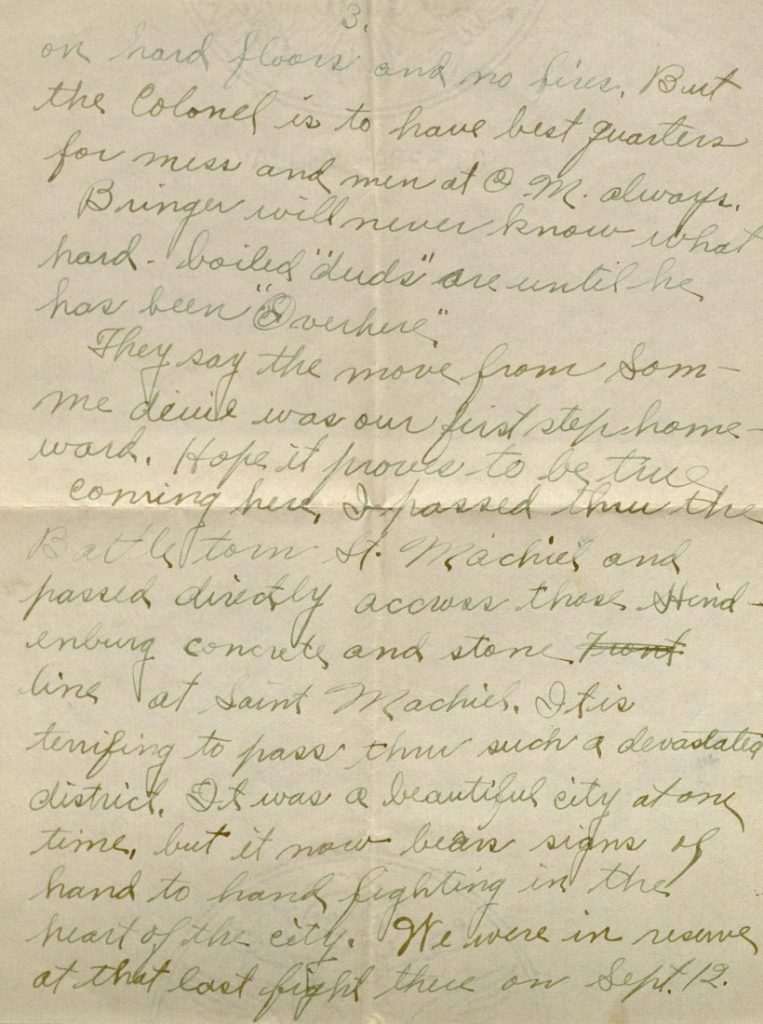 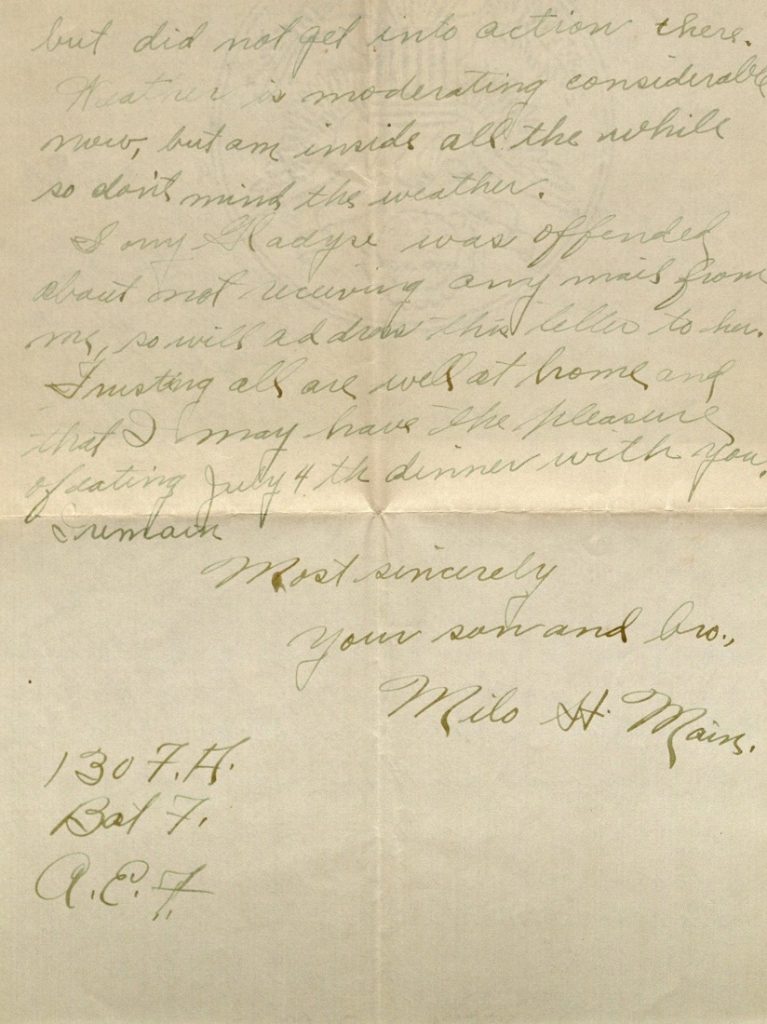 Dear Father and Sisters:- Rec’d June’s letter of Jan 10th, and [sister] Gladyse’s under date of Jan 17th both this morning. They were delivered to my bed early this morning at 10:45 with one from J. Jackman (1), who is still Overseas and well, also another from Wellington.

We left Sommedeiue on Feb. 6th and are here in Ernecourt, a small French town about 70 kilometers from our last home. We established an O.M. in a French home as this place was not vacated during war, only being subject to air raids.

We had champagne and cold, yes beer galore last tonight. But learn this P.M. that one caught drinking intoxicating liquor in 130 F.A. he goes to Labor Battalion and remains Overseas until the last of A.E.F. returns home. So, I am to drink behind the barn from here on out.

You mentioned Miss Hills name again thru Elmer Bringer (2). You folks apparently, take the case more seriously than I. Quite true she is a nice girl, but Old Mike has not lost any girl, nor is he looking for any.

Yesterday morning it started snowing again, and by noon it was a “Royal Kansas Blizzard.” And last night it was some cold, but don’t worry about me, for I was in the hay for true. Big Texan fighter and I were buried up in hay-mow under boo-coo blankets in the hay. Kept as warm as pair of “Kittens.” Many of boys slept on on hard floors and no fires. But the Colonel is to have best quarters for mess and men at O.M. always.

Bringer will never know what hard-boiled “duds” are until he has been “Overhere.”

They say the move from Somme deuie was our first step homeward. Hope it proves to be true

Coming here, I passed thru the Battle torn St. Machiel and passed directly across those Hindenburg concrete and stone line at Saint Machiel. It is terrifying to pass thru such a devastated district. It was a beautiful city at one time, but it now bears signs of hand to hand fighting in the heart of the city. We were in reserve at that last fight there on Sept. 12. but did not get into action there.

Weather is moderating considerable now, but am inside all the while so don’t mind the weather.

Sorry [sister] Gladyse was offended about not receiving any mail from me, so will address this letter to her.

Trusting all are well at home and that I may have the pleasure of eating July 4th dinner with you.

I remain
Most sincerely
Your son and bro.,
Milo H. Main

(1) According to his World War I draft registration card, Sumner County native John Earl Jackman was born on August 3, 1893. In 1917, he was working as a mechanic in an Argonia shop that possibly belonged to his father. Other documentation shows that during the war John served in Company I of the 349th Infantry regiment, 88th Division.

(2) According to his World War I draft registration card, Sumner County native August William Elmer Bringer was born on December 12, 1894. In 1917, he was working as a farmer near Argonia. Other documentation indicates that during the war Elmer served in a Fire Truck and Hose Company in the Quartermaster Corps. The Argonia Argosy reported in late January 1919 that Bringer was stationed at Camp Travis, Texas, but was home on a brief furlough. In a January 23rd article, the newspaper mentioned that Bringer “is one of our soldier boy’s [sic] that we are justly proud of.” He “was too late to get ‘over there’ but is doing his bit for Uncle Sam in Camp.” Elmer Bringer married Milo’s sister June on March 26, 1921.

This entry was posted on Monday, February 4th, 2019 at 12:47 pm and is filed under Kansas Collection. You can skip to the end and leave a response. Pinging is currently not allowed.