The Liberty Boys of “76”: Dime Novel Set During the American Revolution 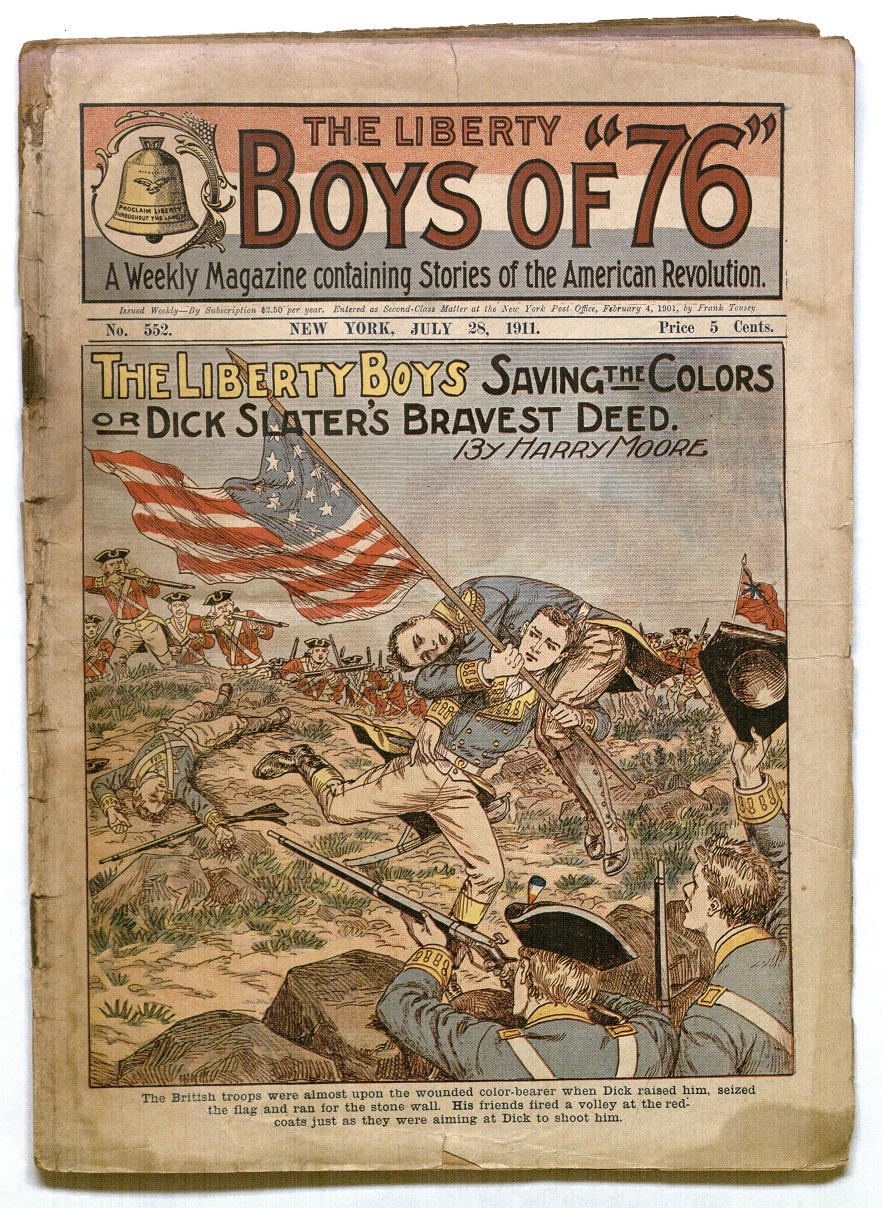 Harry Judson bore the colors, and was the proudest boy in all the troop as he advanced, waving them over the heads of the brave boys who followed…. Suddenly a shot struck Harry and he was seen to fall, the flag trailing upon the ground…. Dick flew across the open space toward Harry, who was beginning to revive, not having been killed, but only wounded…. It was Dick Slater’s bravest deed, and now both redcoats and Liberty Boys cheered as he ran toward the wall, bearing Harry across his shoulders and waving the colors triumphantly.

The term “dime novel” began as a serial title. Beadle’s Dime Novels (1860-1874) were small paper books, published in a series and sold for ten cents each. They laid the groundwork for what would come to be known as the dime novel. Every Beadle’s edition contained a fast-paced, fictional story with an exaggerated, melodramatic plot, and included a beautifully illustrated cover. Rival publishers soon began to produce their own versions of dime novels, resulting in an explosion of cheaply produced fiction in the latter half of the nineteenth century, and into the twentieth century, most of it aimed at young, male readers. Among them was The Liberty Boys of “76.”

From 1901 to 1925, young readers could follow the adventures of the Liberty Boys. Published every week by Frank Tousey, this dime novel told the stories of a fictional group of young Patriots that consisted of up to 100 members, all doing their part in the war for American independence. Their leader in every issue was Captain Dick Slater. The stories were ghost written by Cecil Burleigh and Stephen Angus Douglas Cox, under the pen name of Harry Moore. The authors drew heavily on Benson John Lossing’s Pictorial Field-Book of the Revolution for their research, and as a result, many historical figures appear in the stories, and most of the stories take place during actual battles and events of the Revolution. Thomas Worth, who also was an illustrator for Harper’s Weekly, produced many of the illustrated covers. Ironically, and sadly, as popular as the covers of dime novels became, the identity of most of the cover artists is unknown. 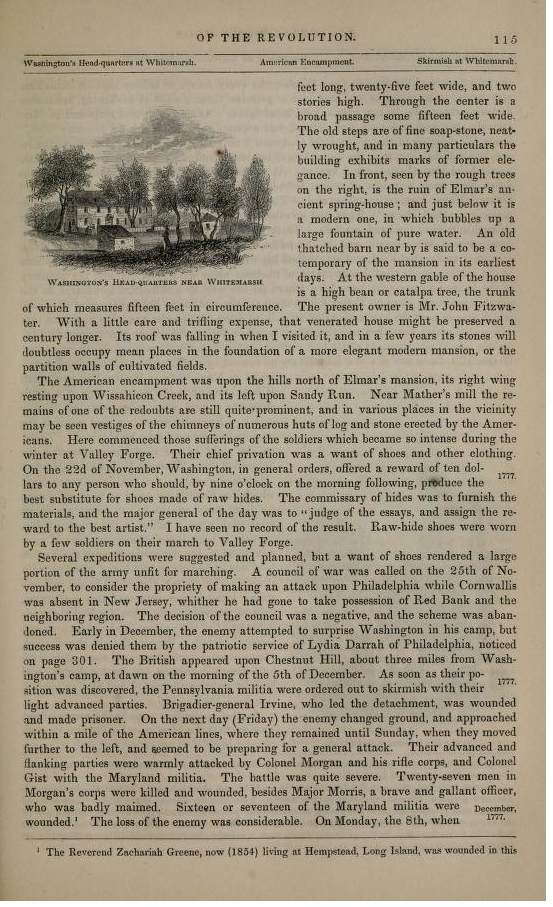 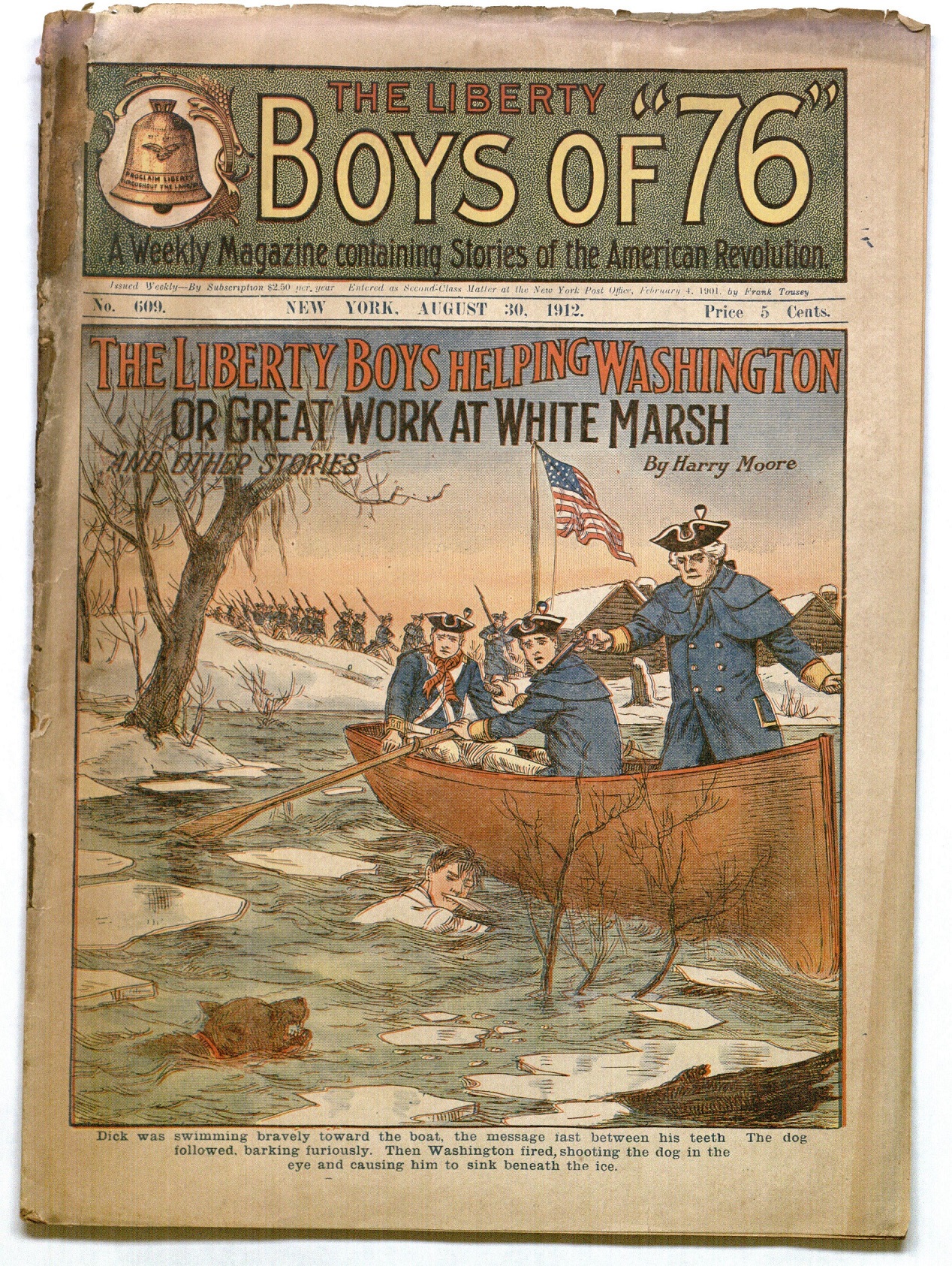 Left: A page from Lossing’s book, Pictorial Field-Book of the Revolution, describing events of the
Battle of White Marsh, part of the Philadelphia campaign of 1777 from a copy contributed to the
Internet Archive by the University of Illinois Urbana-Champaign (Vol. 2, p. 115).
Right: The fictional account of the Liberty Boys’ participation at
White Marsh, No. 609 (August 30, 1912). Call Number: Children 6112. Click images to enlarge. 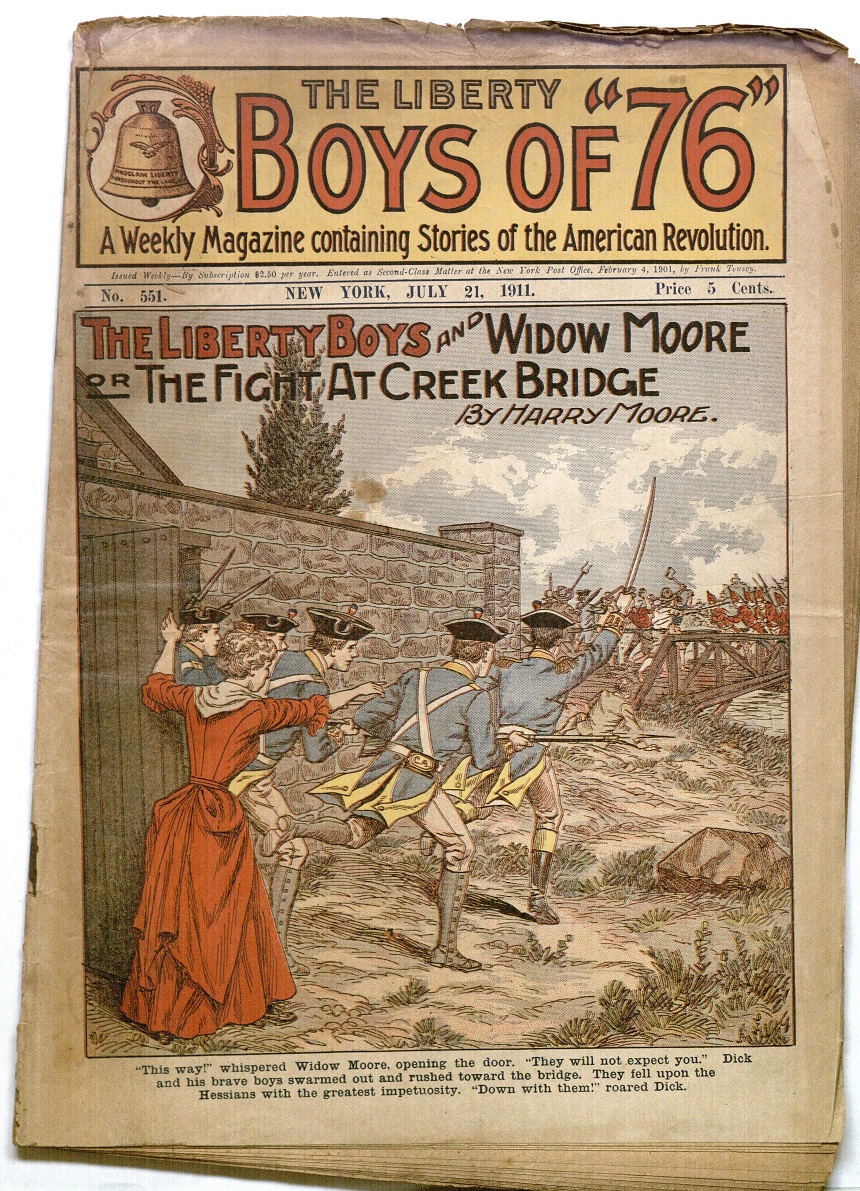 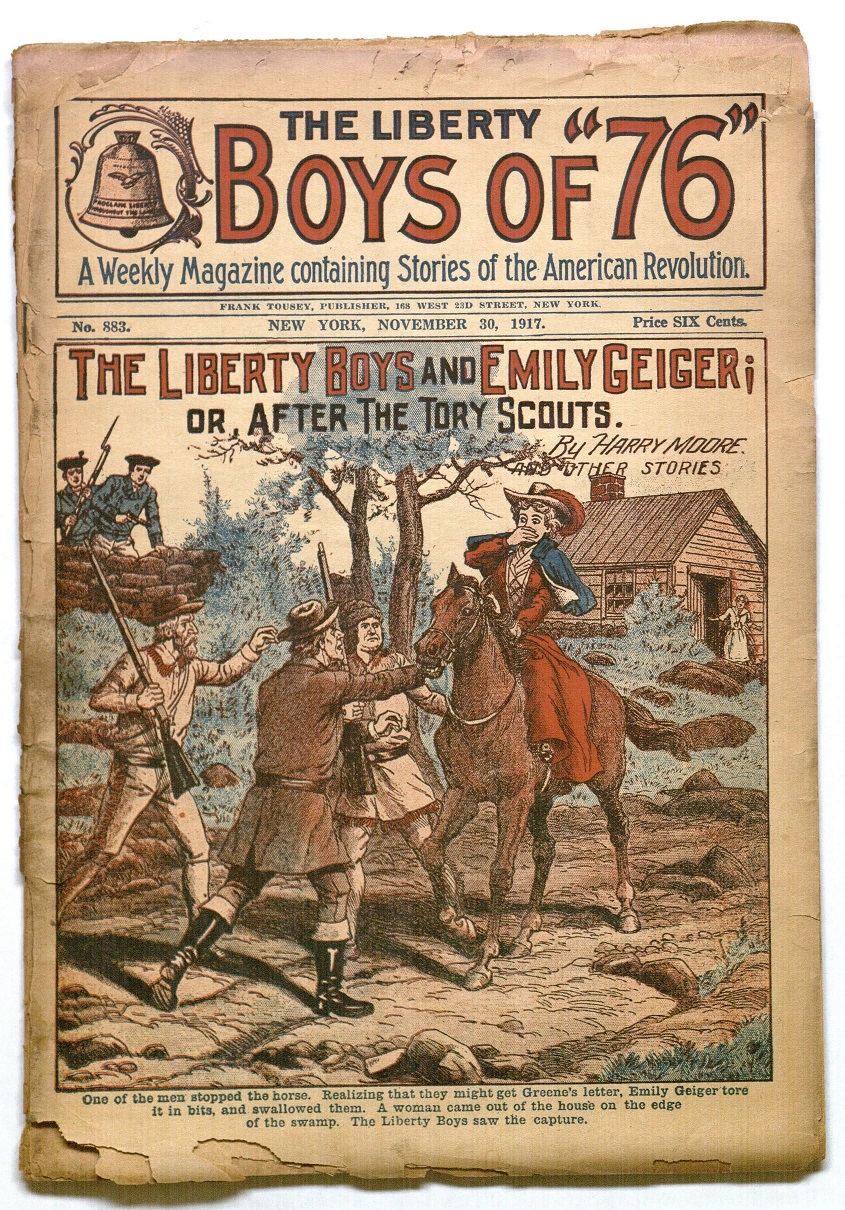 While most of the stories were about the Liberty boys, a lot of them were about girls and women.
The novel on the right is based on the story of Emily Geiger, an actual Patriot hero.
Call Number: Children 6112. Click images to enlarge. 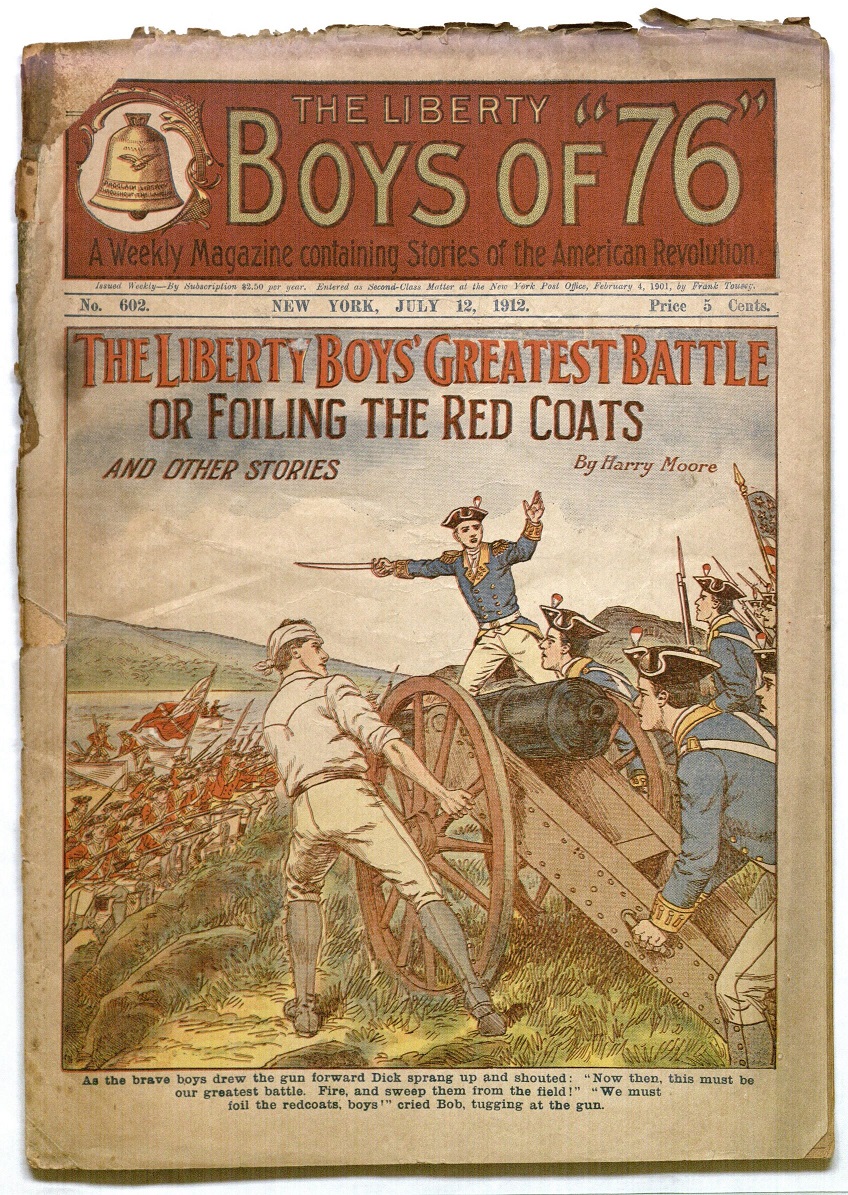 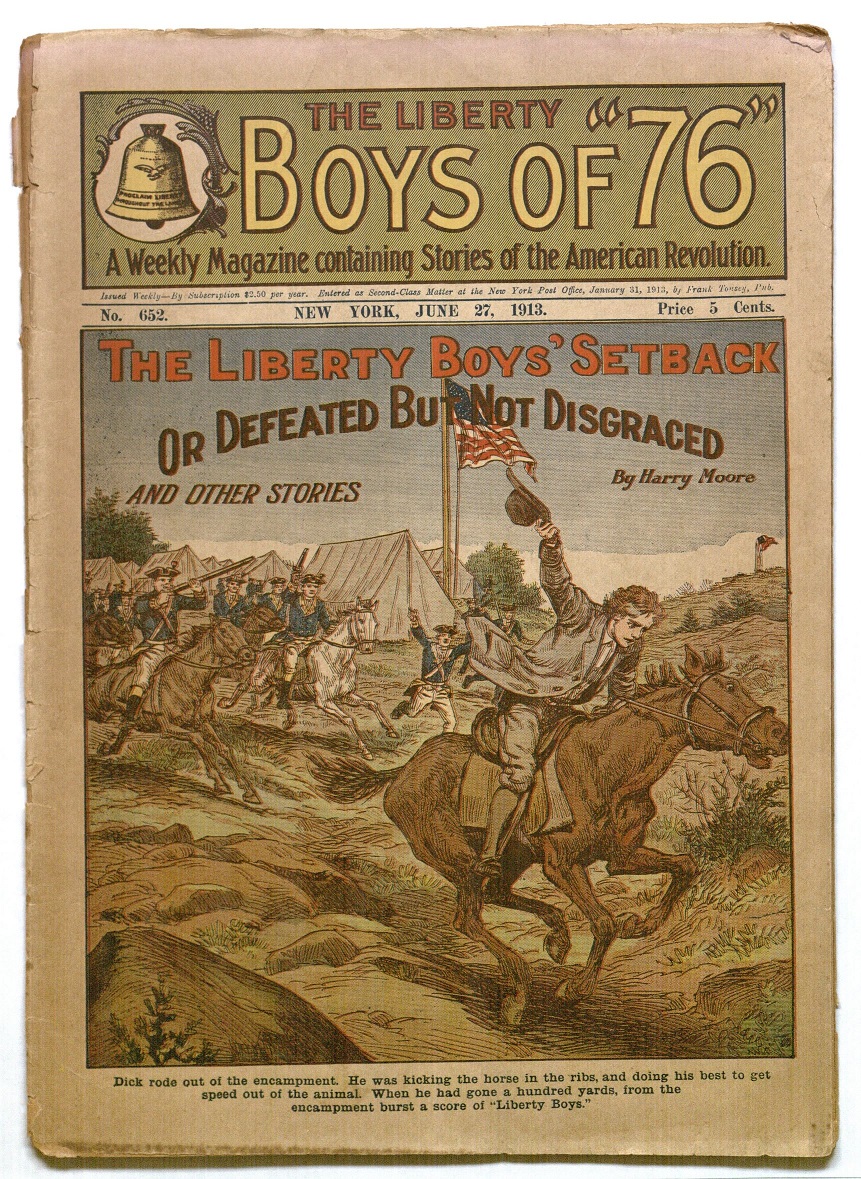 The Liberty Boys of “76” provided children with entertaining reading material, but also slipped in a history lesson at the same time. This approach is still used in today’s historical fiction for children.

The publishers liked to keep their audiences coming back for more tales of adventure.  The July 28th, 1911 issue whose cover is featured at the top of this post ended with the following teaser:  “Next week’s issue will contain “THE LIBERTY BOYS’ SWAMP ANGELS; OR, OUT WITH MARION AND HIS MEN.”