Spencer Research Library holds three letters written by American abolitionist John Brown, who was born in Connecticut on May 9, 1800. Brown was raised in a deeply religious family, and his father taught him that slavery was a great sin. This conviction was so ingrained in Brown that he worked his entire life to end it. “Though a white gentleman,” Frederick Douglass said, Brown “is in sympathy, a black man, and as deeply interested in our cause, as though his own soul had been pierced with the iron of slavery.” Eventually, Brown came to believe that the only way to rid the United States of slavery was through violence. He played a large role in the chaos that reigned in Kansas during the late 1850s. 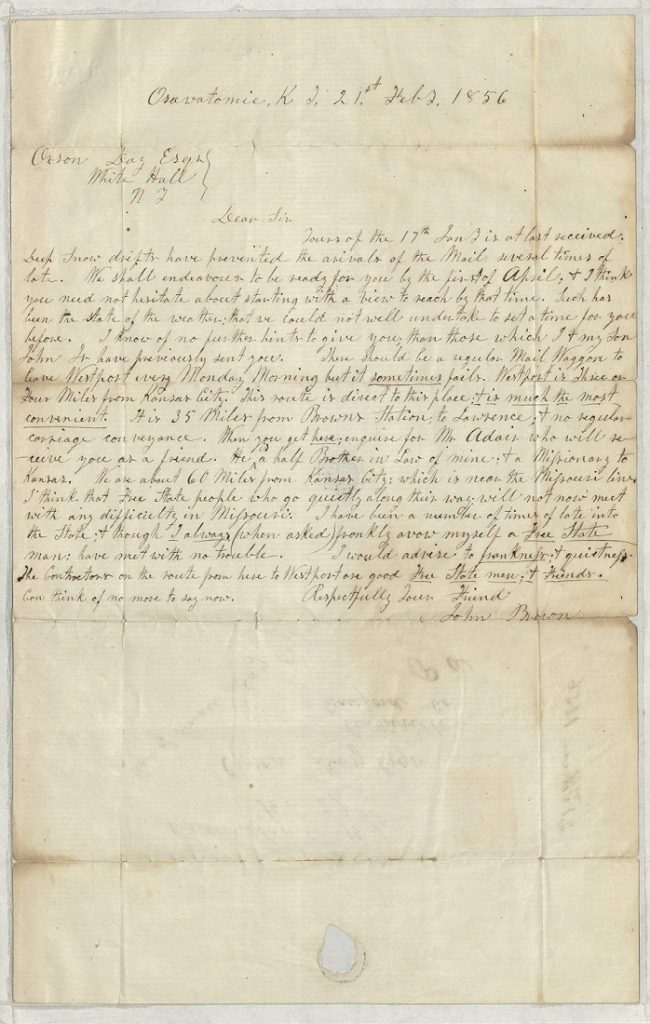 John Brown wrote the first letter in Spencer’s collections approximately four months after he arrived in Kansas in October 1855. He joined his five sons and his brother-in-law, Samuel Adair. Brown’s eldest son, John Brown, Jr., had moved to Kansas in the summer of 1854, after the passage of the Kansas-Nebraska Act. He named his settlement Brown’s Station, and, like his father, was heavily involved in the abolition cause.

Yours of the 17th Jany is at last received. Deep Snow drifts have prevented the arrival of the Mail several times of late. We shall endeavour to be ready for you by the first of April; & I think you need not hesitate about starting with a view to reach by that time. Such has been the state of the weather; that we could not well undertake to set a time for you before. I know of no further hints to give you; than those which I & my Son John Jr have previously sent you. There should be a regular Mail Waggon to leave Westport every Monday Morning but it sometimes fails. Westport is Three or Four Miles from Kansas City. This route is direct to this place; & is much the most convenient. It is 35 Miles from Browns Station, to Lawrence; & no regular carriage conveyance. When you get here; inquire for Mr Adair who will receive you as a friend. He is a half Brother in Law of mine; & a Missionary to Kansas. We are about 60 Miles from Kansas City; which is near the Missouri line. I think that Free State people who go quietly along their way will not now meet with any difficulty in Missouri. I have been a number of times of late into the State; & though I always (when asked) frankly avow myself a Free State man; have met with no trouble. I would advise to frankness; & quietness. The Contractors on the route from here to Westport are good Free State men; & Friends. Can think of no more to say now. 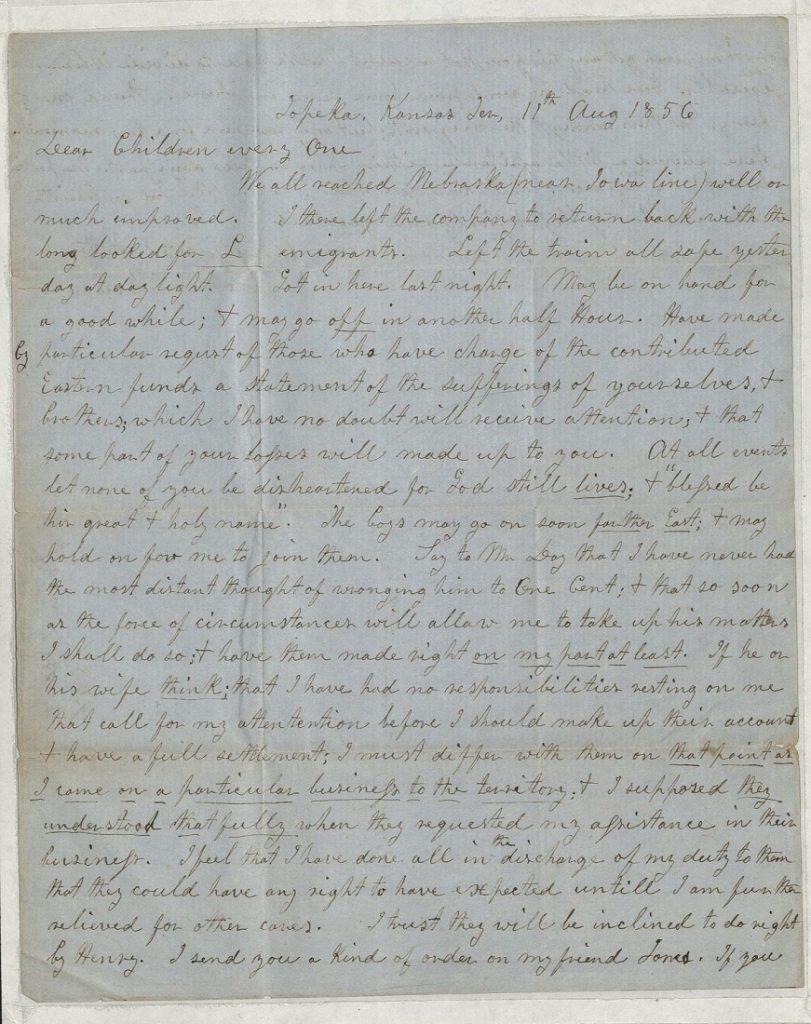 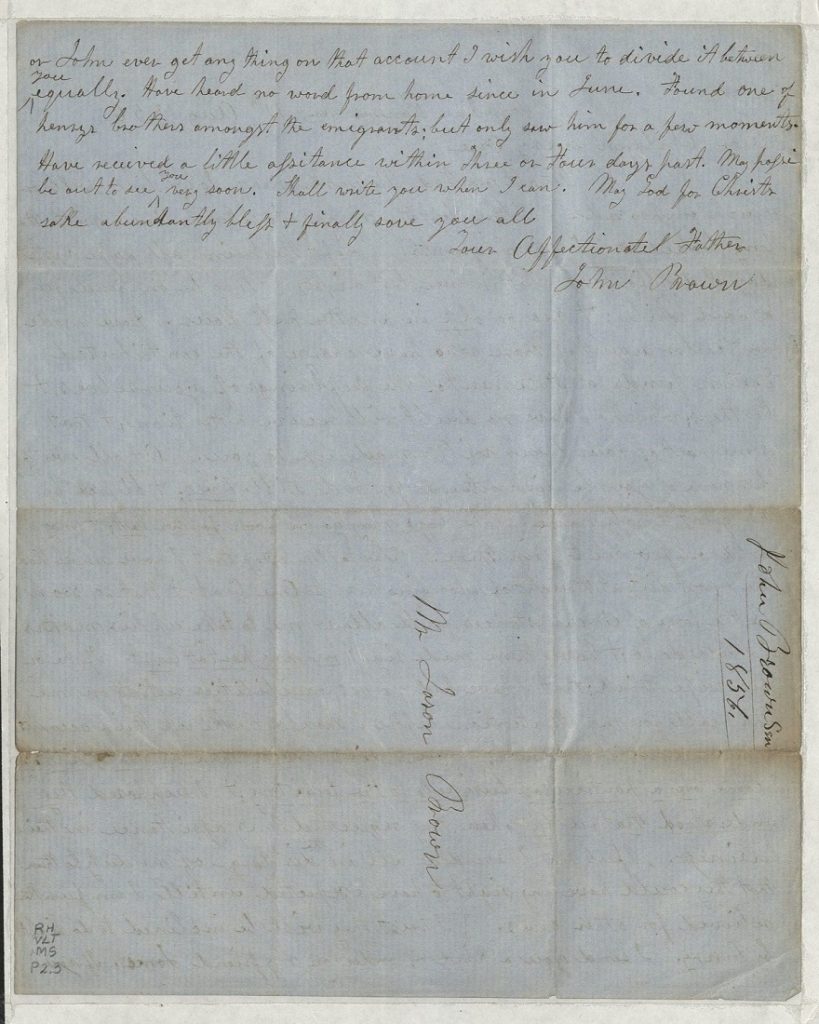 The second letter in Spencer’s collections illustrates Brown’s single-minded focus on destroying slavery and his increasing militancy. Much had occurred in the six months since the first letter. On May 22, 1856, South Carolina Representative Preston Brooks severely beat Massachusetts Senator Charles Sumner on the floor of the U.S. Senate, responding to Sumner’s “Crime Against Kansas” speech days earlier. When he heard of this, Brown said that “we must fight fire with fire. Something must be done to show these barbarians that we, too, have rights.” On the same day, Lawrence, Kansas, a free-state headquarters, was raided and sacked by Missouri pro-slavery men. Two days later, on May 24th, Brown – with four of his sons and three others – directed the brutal murder of five pro-slavery settlers in a settlement near Pottawatomie Creek, Kansas. On June 2nd, Brown and his men defeated a larger pro-slavery force at the Battle of Black Jack, Kansas.

Dear Children every One

We all reached Nebraska (near Iowa line) well or much improved. I there left the company to return back with the long looked for L [Lawrence] emigrants. Left the train all safe yesterday at day light. Got in here last night. May be on hand for a good while; & may go off in another half hour. Have made by particular request of those who have charge of the contributed Eastern funds a statement of the suffering of yourselves, & brothers; which I have no doubt will receive attention; & that some part of your losses will [be] made up to you. At all events let none of you be disheartened for God still lives; & “blessed be his great & holy name.” The boys may go on soon for the East; & may hold on for me to join them. Say to Mr. Day that I have never had the most distant thought of wronging him to One Cent; & that so soon as force of circumstances will allow me to take up his matters I shall do so; & have them made right on my part at least. If he or his wife think; that I have had no responsibilities resting on me that call for my attentention before I should make up with their account & have a full settlement; I must differ with them on that point as I came on a particular business to the territory; & I supposed they understood that fully when they requested my assistance in their business. I feel that I have done all in the discharge of my duty to them that they could have any right to have expected untill I am further relieved for other cares. I trust they will be inclined to do right by Henry. I send you a kind of order on my friend Jones. If you or John ever get any thing on that account I wish you to divide it between you equally. Have heard no word from home since in June. Found one of henrys brothers amongst the emigrants; but only saw him for a few moments. Have received a little assistance within Three or Four days past. May possi[bly] be out to see you very soon. Shall write you when I can. May God for Christs sake abundantly bless & finally save you all. 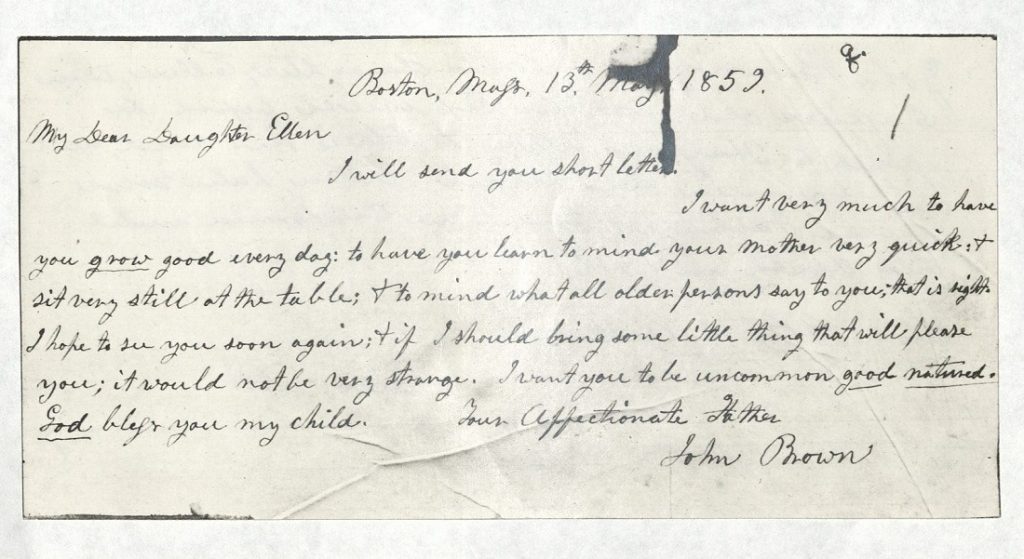 John Brown wrote the third letter in Spencer’s collections six weeks before he left for Harper’s Ferry, Virginia, with the intention of seizing the federal armory and starting a slave uprising. Brown, with twenty-one men, led his attack on October 16, 1859. After two days, U.S. marines stormed the building, capturing Brown and six of his men. Ten men, including two of his sons, were killed. Brown himself was wounded.

I will send you short letter.

I want very much to have you grow good every day; to have you learn to mind your Mother very quick; & sit very still at the table; & to mind what all older persons say to you; that is right. I hope to see you soon again; & if I should bring some little thing that will please you; it would not be very strange. I want you to be uncommon good natured. God bless you my child.

Convicted of treason, multiple first-degree murders, and inciting insurrection, Brown was hung on December 2, 1859. His last words, written shortly before his execution, prophesized the coming Civil War: “I John Brown am now quite certain that the crimes of this guilty land: will never be purged away; but with Blood. I had as I now think: vainly flattered myself that without very much bloodshed; it might be done.” On April 12, 1861, Confederate forces fired on Fort Sumter.

This entry was posted on Wednesday, May 8th, 2019 at 1:25 pm and is filed under Kansas Collection. You can skip to the end and leave a response. Pinging is currently not allowed.